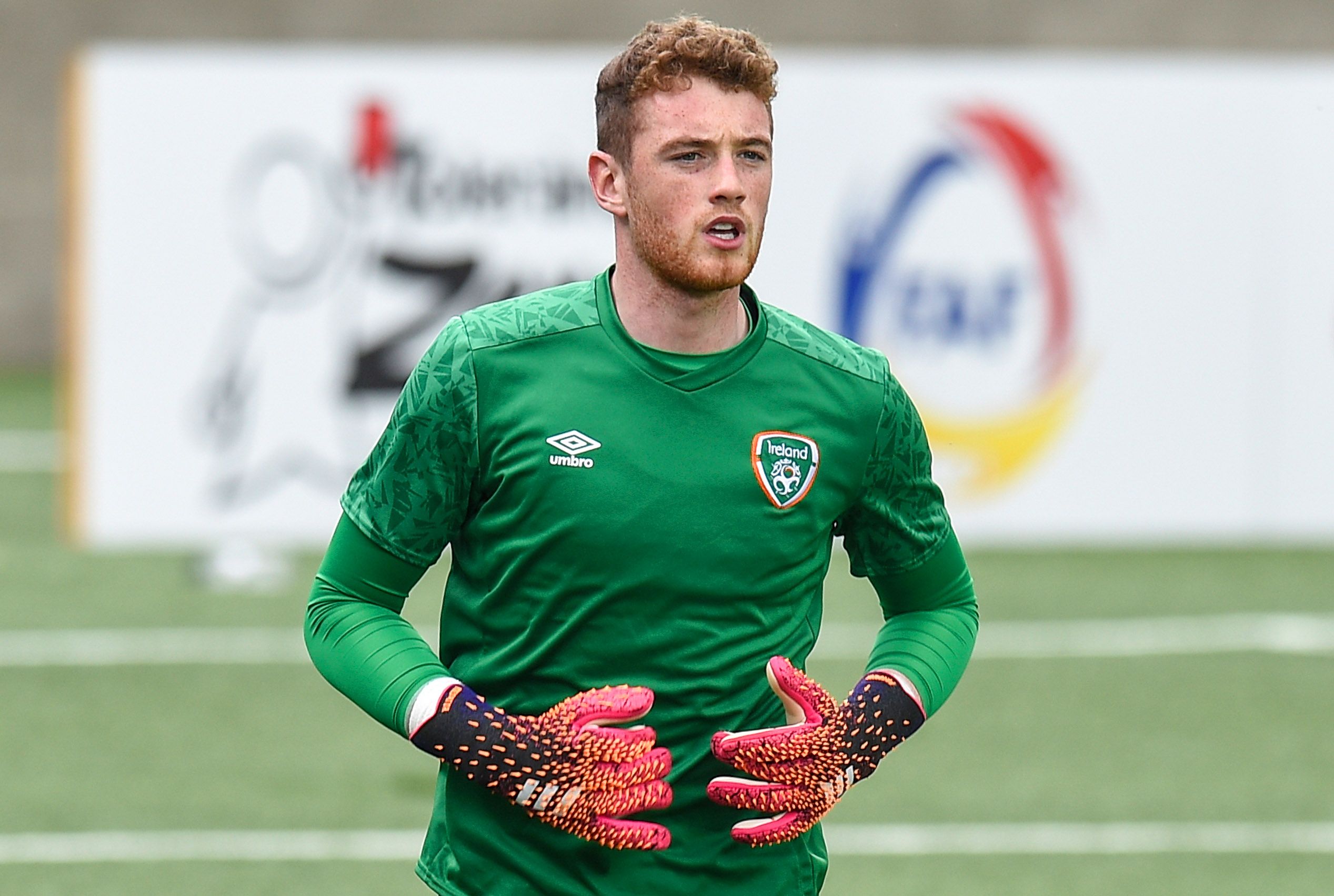 Mark Travers was in goal for Bournemouth's 2-0 win over Aston Villa. INPHO/BAGU BLANCO

When asked last week about the likely challengers to Manchester City and Liverpool in the English Premier League this season, many pundits named Tottenham Hotspur, and Spurs did make a fine start on Saturday beating Southampton 4-1 in North London. A full pre-season under Italian manager Antonio Conte and six new signings means Spurs could be a force this season, but they have often promised much and delivered little. Matt Doherty was a late sub for the winners, but it wasn’t a happy experience for his Irish colleague Gavin Bazunu in the Saints goal even if the former Shamrock Rovers and 10-times capped player wasn’t faulted for the goals and was forced to make some decent saves.

It was a more memorable opening weekend for County Kildare native Mark Travers, who was in goal as Bournemouth beat Aston Villa 2-0 at the Vitality Stadium. As it happened, Travers, who has been capped three times, made his EPL debut in a 1-0 Bournemouth win against Spurs in May 2019, and his performance then earned him inclusion in Garth Crooks’s “Team of the Week” on the BBC.

Yet another Irish goalkeeper was in a match-day squad at the weekend; the Bray-born, 50-times capped Darren Randolph, however, is West Ham’s third choice in the position, and when Łukasz Fabiański was injured in the first-half against Manchester City, it was Alphonse Areola who came on to replace him.

Cork’s Caoimhin Kelleher, who has eight Irish caps, was not in the Liverpool matchday squad, with Adrian as potential replacement for Alisson. Kelleher was used mainly in cup competitions last season, most notably in the League Cup final when he scored the winning penalty against Chelsea after an extended shootout.

Manchester City won at a canter against a strangely passive West Ham, who rarely threatened after a bright opening burst at the London Stadium on Sunday. Erling Haaland opened his City goal account and demonstrated the huge threat he will pose this season. The 22-year-old Norwegian striker delivered exactly what City manager Pep Guardiola wanted following his summer signing from Borussia Dortmund when he gave City the lead from the penalty spot nine minutes before half-time, after he was brought down by goalkeeper Areola. Haaland wrapped up City’s win after 65 minutes with a composed left-foot finish after running on to Kevin de Bruyne's perfect pass.

City manager Pep Guardiola was happy with Haaland’s attitude and the confidence the player showed around the penalty kick. He said: “I know Erling handled a lot of criticism this week. He was really calm, he trained really well but the way he took the ball for the penalty I said ‘I like it.’ That is a pretty good sign. To be so confident, I like it.’’

West Ham introduced Under-21 Republic of Ireland international Conor Coventry for his Premier League debut in the 92nd minute.

Nathan Collins set a new Irish transfer record when he signed for Wolves from Burnley, but his new club lost their opener 2-1 away to Leeds United.

Shane Duffy, who joined Fulham on loan from Brighton last week, came on late as the newly-promoted club held on for a 2-2 draw against visitors Liverpool.

Seamus Coleman’s Everton lost their opening game against visitors Chelsea, but the Donegal man hasn’t played since Ireland’s Nations League defeat to Armenia at the start of June, a game in which he picked up a groin injury necessitating minor surgery during the close-season. The Irish captain is close to full fitness and was an overage player for Everton’s under 21 team against Blackburn last week. Ferguson was not in the Bournemouth squad on Saturday. The honor of scoring the first Premier League goal of the season went to Brazilian Gabriel Martinelli in Arsenal’s 2-0 win over Crystal Palace on Friday night.

Meanwhile Liverpool manager Jurgen Klopp admitted that their 2-2 draw in London with Fulham felt like a defeat. Mo Salah’s late equalizer helped cancel out two goals from Aleksandar Mitrovic, with Darwin Nunez having earlier levelled for the Reds after Fulham’s opener. Klopp said: ‘‘The best thing about this game was the result. We started exactly the opposite way that we wanted. We are used to more dominance and we couldn’t get that because we were not good enough, not quick enough, not precise enough, all these kind of things. But I don’t don’t want to take anything away from Fulham, they did really well.”

A new manager and some new faces, but the same old story for Manchester United who lost 2-1 at home to Brighton, the Seagulls first-ever win at Old Trafford. New manager Erik ten Hag has apparently started to impose his personality on the club to the extent of ousting some of the “prawn-sandwich brigade” from their corporate hospitality suites so his players could have their pre-match meal. Ten Hag decided to leave Ronaldo on the bench, but after seeing Paschal Gross give Brighton a 2-0 lead by half-time ten Hag brought on the Portuguese star eight minutes into the second half. The 37-year-old had a negligible impact and it was another Portuguese, Diogo Dalot, who created the confusion that led to United’s goal. In the 68th minutes. But by the end it was Brighton who looked more likely to score again. Co-chairman Avie Glazer was paying a rare visit to Old Trafford would have heard the songs to his left calling for his family to get out of the club.

Callum O’Dowda gave Cardiff the lead after four minutes with a well-directed header, but Shane Long equalized from the penalty spot on 27 minutes for visitors Reading, his first goal for the club after 11 years being away from the club

Blackburn Rovers are the early leaders in the Championship as they are the only club with maximum points after only two series of games. Just shows how competitive the Championship is. Sammie Szmodic, who was called into the Irish squad by Stephen Kenny last season, but was not capped, scored on his debut for Rovers, having recently joined from Peterborough and they went on to beat Swansea 3-0

James McClean scored for Wigan after being set up by Irish colleague Will Keane as the Latics drew 1-1 away to Norwich. Andrew Omobamidele was in the Canaries team, but still no sign of Adam Idah coming back from injury. Irish international Scott Hogan was on target as Stephen Kenny’s former assistant John Eustace got his first win as Birmingham City’s head coach, with the Blues beating Huddersfield Town 2-1.

The Republic of Ireland women’s team are in fine form throughout the ongoing World Cup qualifiers has been reflected in the recent FIFA world rankings as Vera Pauw’s team has reached their highest ever placing. Ireland's comprehensive victory over Georgia in Gori has seen the World Cup hopefuls move up one place to 26th, which elevates them into the top 16 of European teams. The June ranking of 27th, up three places since March, equalled the national team’s best ever milestone since the team last reached that place back in 2008. Since Pauw took charge in 2019, the team has moved up six places overall and she feels that they can go even higher ahead of next month’s vital meeting with group rivals Finland. Pauw said: ‘‘It is fantastic to see the team rise up to their highest ever position in the FIFA women’s world rankings because this is a reflection of the tremendous work that the players and staff have put in over the years.’’

North Macedonia champions Shkupi were not happy that they had to fly into Shannon Airport last week as Dublin Airport could not handle extra charter flights. A statement from the club said it was an “evil act” that they were forced to use Shannon. The Hoops won the first leg 3-1 in Tallaght Stadium and and are due to play the second leg tomorrow night in North Macedonia.

St Pat’s put their first round FAI Cup defeat to Waterford behind them and produced a stunning performance, defeating Bulgaria’s CSKA Sofia 1-0 on their home patch. Serge Atakayi’s late winner secured St Pat’s first European away win since 2009, as they take a one-goal advantage to Tallaght Stadium for tomorrow’s second leg. St Pat’s flew to Bulgaria from Knock Airport, but their return flight was delayed and their League game against Shelbourne on Sunday had to be postponed.