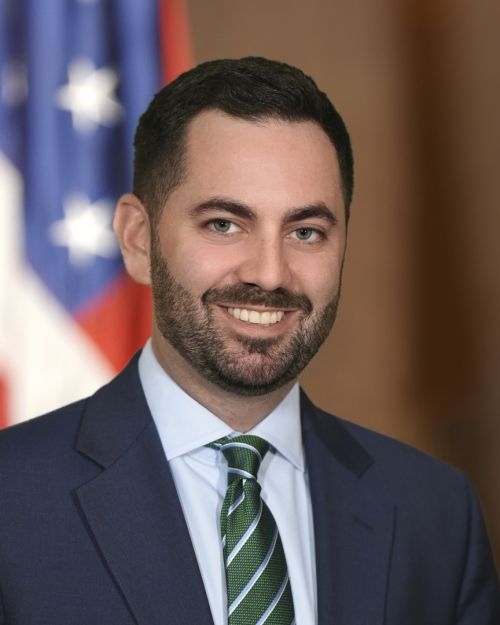 VICTORY: Congressman-elect Mike Lawler has written to President Biden urging him to appoint someone to the vacant Special Envoy post

NEWLY elected US Congressman Mike Lawler has written to President Joe Biden urging him to fill the vacant US Special Envoy role amid concerns around the “increasingly volatile situation in Northern Ireland” arising from the post-Brexit Protocol.

The US Special Envoy role has been vacant since January 2021. Senator George Mitchell was the first to hold the role, having been appointed in 1995 and went on to chair the talks which led to the Good Friday Agreement.

The Republican Congressman was elected to New York’s 17th Congressional district in November. His victory was one of the shock results of the election when he defeated the Democratic incumbent Sean Patrick Maloney who is chair of the Democratic Congressional Campaign Committee charged with ensuring the re-election of Democratic representatives.

As we approach Thanksgiving, I wanted to extend my heartfelt thanks to residents all across the 17th Congressional District for their support throughout this campaign and for placing your trust in me to represent you in Washington, D.C. pic.twitter.com/09X5THXd3P

In a letter seen by this paper, Congressman-elect Lawler, who currently represents the 97th district in the New York State Assembly, said that his constituents, nearly ten percent of whom are of Irish descent, are concerned about the “increasingly volatile situation in Northern Ireland, with Northern Ireland once again a geopolitical hotbed”. And he told the President it is crucial that the post of U.S. Special Envoy to Northern Ireland be filled as expediently as possible.

“The controversies surrounding the Northern Ireland Protocol negotiated during Brexit have the potential to trigger a catastrophic trade war,” he said.

“I am sure you are already aware of the facts concerning this precarious development. In part as an effort to satisfy Irish Nationalists, the Protocol established a trade barrier in the Sea of Ireland.

“This naturally enraged Irish Unionists, who demanded free trade between the entirety of the United Kingdom, even going so far as to boycott the formation of a regional parliament until this demand was met.”

In his letter, Congressmen-elect Lawler told the President that the United Kingdom is now trying to renegotiate the Protocol in “an attempt to satisfy the demands of Northern Ireland Unionists.”

How Sean Maloney lost — and Mike Lawler won — in the Hudson Valley https://t.co/Tp03dsTaub via @lanabellamytu and @phillippantuso

“Such a resulting trade war would dramatically worsen our already crippling inflation crisis, crushing the American consumer, and potentially risk turning a recession into a depression.

“A trade war produces no winners, and the American people will lose as a result of further economic calamity at home.

“Given the tenuous situation and the dire need of American leadership to facilitate a mutually agreeable resolution between our European allies and thus avoid a global catastrophe, it is unconscionable that the United States has not had a Special Envoy to Northern Ireland in nearly two years.”

The Assemblyman concluded: “When it comes to the growing tensions in Northern Ireland, filling the position of Special Envoy is the least we can do.”

Congressmen-elect Mike Lawler will be sworn in to the US House of Representatives on January 3. He will address the Irish Law & Order Awards hosted by the Irish Echo in New York on January 27.