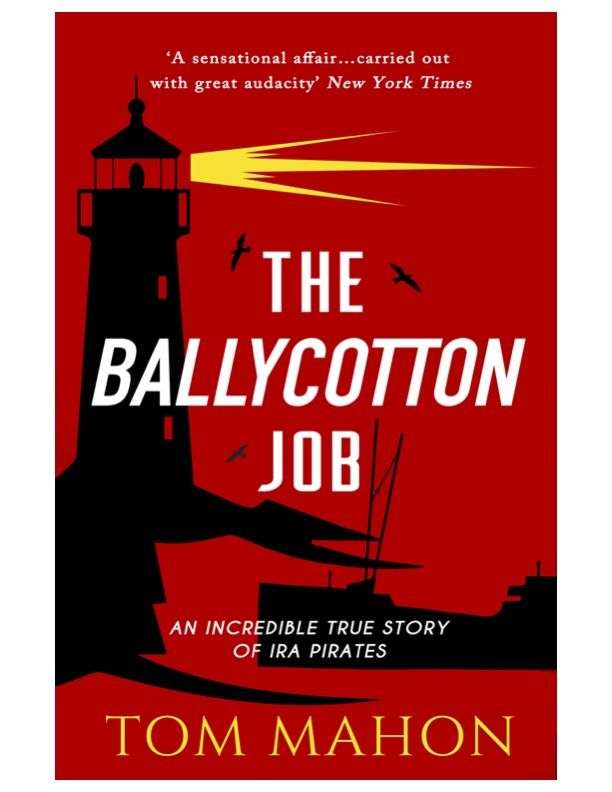 Tom Mahon remembered the grandfather for whom he was named as a “very kind, jovial man, with a great sense of humor, and a great raconteur.”

He never mentioned his brief career as a “pirate.”

That was when the Hawaii-based radiologist’s first book was published. Tom Crofts wasn’t part of the story of “Decoding the IRA,” but the author gave the Echo a little background about him anyway when asked. Crofts joined the Irish Volunteers in Cork in 1913 at age 20 and was active in the Irish Republican Brotherhood group around Sean O’Hegarty, which mobilized at Easter 1916. Later, he was commander of the IRA’s Active Service Unit in Cork, and was captured by the police following a shootout.

He opposed the Treaty in the Civil War, but with Tom Barry, the prominent IRA leader from West Cork, he was involved with peace initiatives that helped end the conflict.

“He was notable for the wide diversity of friends he kept,” Mahon said, including those he’d opposed in 1922-23. Among them were Frank Thornton, a member of Collins’s Squad, and Johnny Collins, older brother of the slain pro-Treaty leader.

“He was chairman of Fianna Fail [of which he was a founding member] and director of elections in Cork city for many years and indeed was instrumental in launching [future Taoiseach] Jack Lynch on his career in politics,” Mahon said. “I am told he was quite a formidable presence when chairing a meeting, though this was a side of him I never saw.”

Now, Mahon has written a history of an episode in which his maternal grandfather Crofts was involved.

Tell us about your new book “The Ballycotton Job.”

In March 1922 the IRA captured the Royal Navy’s arms ship the “Upnor” on the high seas off the coast of Cork. This act of modern-day piracy is one of the most dramatic episodes of the revolutionary period in Ireland and my book “The Ballycotton Job: An Incredible True Story of IRA Pirates” is the first full account of the escapade.

Less than a year after the end of the War of Independence and the signing of the Anglo-Irish Treaty, Ireland was teetering on the verge of civil war. The IRA had split into two factions; one group accepted the Treaty and the limited degree of independence that came with it, while the other wanted to continue to fight the British until they won a fully independent republic. Michael Collins, the leader of the pro-Treaty side, became chairman of the new Dublin government, although the anti-Treaty IRA controlled much of the countryside. It was becoming increasingly likely that the two sides would fight it out.

Meanwhile Sean O’Hegarty, the anti-Treaty commander in Cork city, desperately needed to rearm his brigade for the upcoming struggle. Therefore Sean came up with the daring idea of capturing the “Upnor" along with its cargo of arms and ammunition, which the British were repatriating back to England from Cork.

On the morning that the “Upnor" set sail Sean and his men swung into action. First of all they kidnapped a ship’s captain Jeremiah Collins - who was an IRA sympathizer - and drove him to the port of Cobh. There the IRA hijacked a tugboat, the “Warrior” and with Collins as captain they sped out of Cork Harbor in pursuit of the arms ship.

Later that evening they intercepted the “Upnor" 35 miles out at sea and by pretending to be carrying urgent orders from the navy they got her to cut her engines. An IRA boarding party - brandishing machine guns and revolvers - stormed the “Upnor,” imprisoned her crew and sailed her to the small fishing port of Ballycotton.

In the meantime almost 100 lorries and trucks were hijacked in Cork city and driven to Ballycotton pier. Working overnight a thousand IRA fighters and local volunteers – under the watchful eye of Sean O’Hegarty —  loaded 80 tons of munitions onto the lorries, which were dispersed to secret arms dumps throughout Cork. It was a massive haul of machine guns, rifles, revolvers and explosives, the likes of which the IRA had never before captured.

What were the consequences of the capture of the "Upnor"? Did it have an influence on the subsequent Irish Civil War?

The Dublin and London governments were shocked; everyone was incredulous that the IRA were capable of capturing a Royal Navy ship. Michael Collins was extremely worried that his government was now highly vulnerable to a well-armed anti-Treaty IRA. While Winston Churchill, the British minister in charge of Irish affairs, was forced to supply Collins’s forces with thousands of rifles and machine guns, which led further down the road to civil war.

When the Civil War erupted that summer the munitions from the “Upnor” played a crucial role. The capture was the largest single source of arms and ammunition for the anti-Treaty side and as such resulted in considerable loss of life and destruction of property.

Given that the vast majority of the Cork IRA’s ammunition and most of its rifles came from the “Upnor,” it’s more than likely that when Michael Collins was ambushed at Bealnablath in August 1922 the rifle and bullet that killed him both came from the “Upnor.”

Who are the main characters in your book?

The two central characters are the IRA’s Sean O’Hegarty and Admiral Sir Ernest Gaunt, the Royal Navy commander in Cork, who was responsible for the safety of the “Upnor.”

The pair were a study in contrasts. Though O’Hegarty isn’t well known today, he was one of the most successful and brilliant IRA leaders. During the War of Independence he and his brigade drove the British out of much of county Cork and made Cork city ungovernable. A domineering and unyielding man, he was brave, ruthless and fiercely determined.

On the other hand Admiral Gaunt was a highly decorated naval hero, who had fought with great distinction at the Battle of Jutland during World War One. Interestingly his wife Lady Louise (née Martyn) was originally from Ballyvaughan in County Clare and a devout Catholic, who raised their three children in the faith. But in Ireland, Gaunt found himself out of his depth and he foolishly underestimated the threat he faced from Sean O’Hegarty and the IRA.

After leading the attack what did Sean O’Hegarty do next?

After the capture of the “Upnor" Sean was in an unassailable position. He now had sufficient arms to defy Michael Collins by declaring an Irish Republic and repudiating the Treaty, which would have led inevitably to civil war. But something changed. Unexpectedly he backed down and began to play a leading role in the – ultimately futile - negotiations to bring both the anti-Treaty and pro-Treaty sides together. For the first time in his life Sean acted as a peacemaker.

On the eve of the outbreak of the Civil War, Sean resigned his command and played no role in the ensuing struggle. He never accepted the Treaty, but neither did he accept a war between brothers and sisters.

What were the consequences for Admiral Gaunt?

Sean O’Hegarty was always several steps ahead of Admiral Gaunt and remarkably Gaunt didn’t even suspect that the “Upnor" was missing until he read his paper the following morning. Surely the first time in history that an admiral found out about an attack against his forces from a newspaper!

Gaunt made three crucial errors that contributed to the capture of the “Upnor.” He failed to provide a naval escort, he didn’t put an armed guard on board and he didn’t install a wireless so her captain could have summoned help. No wonder Churchill was determined to have him court martialled.

But the incident was such an embarrassment to the British government and the Royal Navy that they couldn’t afford to have him tried in public, with the news splashed all over the papers. Instead in quick succession he was promoted from vice admiral to full admiral, made a Knight Commander of the British Empire and then forced into retirement. Which all goes to show that it’s sometimes better to err monumentally than in a minor way.

How did you come across this fascinating tale?

I live in Honolulu, along with my wife and son, but I grew up in Dublin and have strong Cork connections. My mother was from Cork city and her father Tom Crofts was an officer in the Cork IRA and was one of the “pirates” that captured the “Upnor.” Later he commanded the anti-Treaty IRA in Cork and Kerry and went onto play an important role in the ending of the Civil War.

This family connection attracted me to the story, but it turned out to be a massive project that took years of researching archives throughout Ireland and Britain and visiting numerous historical sites. However, it was a great excuse to explore a beautiful part of Ireland.

I feel it’s important to be able to finally tell the story of what was arguably the most brilliant military operation ever carried out in Ireland. It was almost flawless in its planning and execution and is a testament to the memory of Sean O’Hegarty and the Old IRA of Cork.

“The Ballycotton Job: An Incredible True Story of IRA Pirates” (Mercier Press, 2022) by Tom Mahon is available at Amazon.com and other websites and in bookshops throughout Ireland. For an extract, click here.