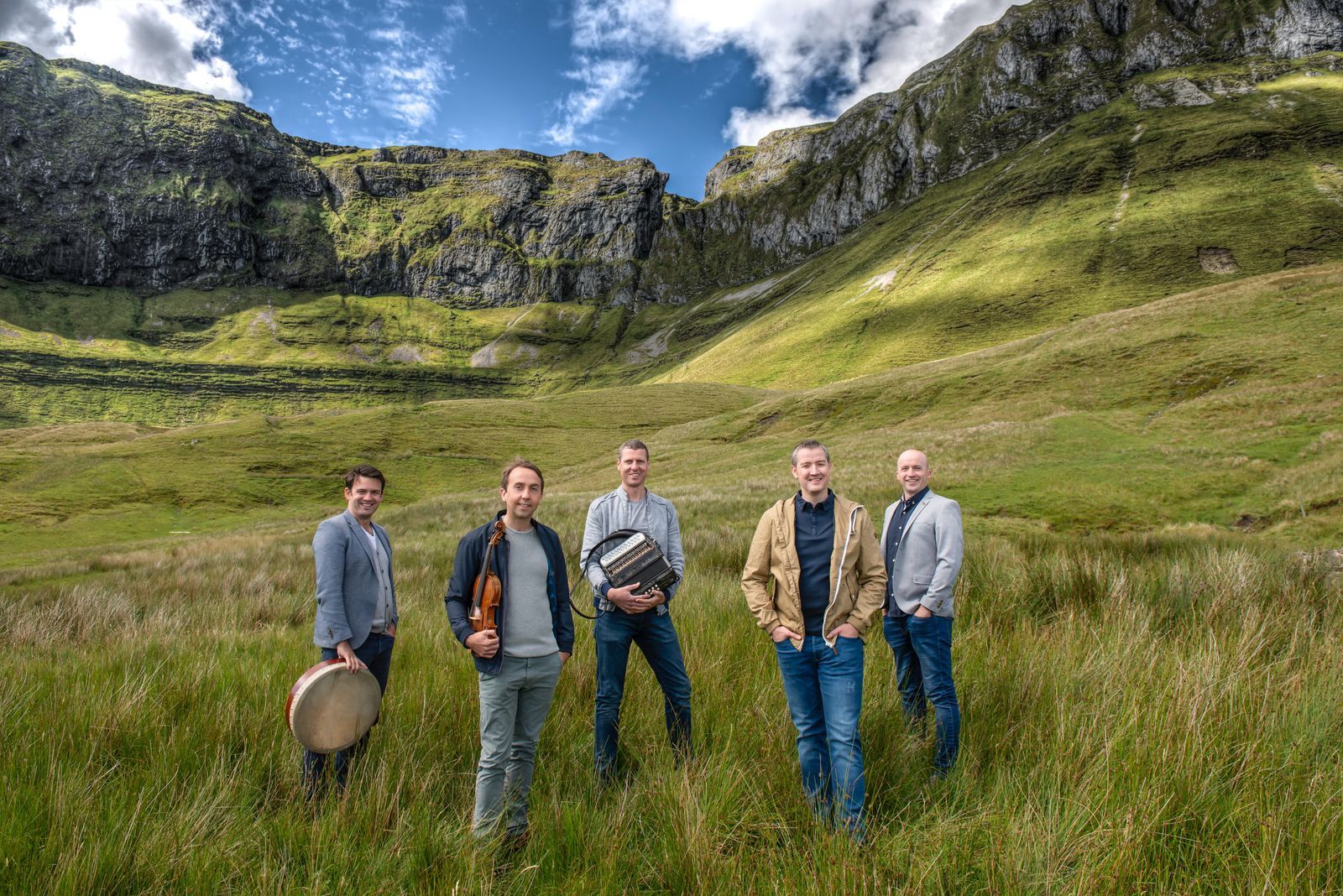 Téada are joined by actor John C. Reilly for one track on “Coiscéim Coiligh /As the Days Brighten.”

Téada’s 6th is perhaps their best

Traditional supergroup Téada, currently celebrating 21 years together, are just out with “Coiscéim Coiligh /As the Days Brighten,” a brand spanking new album full of brilliant music that fans of the band will really dig.  With it, not only are the Téada folk up to their old top-shelf musical tricks, they’ve also got a surprise up their sleeve that’ll turn a few heads.

Twenty-one years is quite a long time to keep at it, and this, their sixth album and first since 2013, might be the best of them all.  The album opens with “Ar Mhuin na Muice / …,” a blast of reels featuring a couple of Sean Ryan’s.  The arrangement is excellent, with the melody instruments giving the tune a lot of drive. But Harvey’s piano backing is particularly strong and the way it articulates with Rosenstock and Mc Elwain’s playing adds substantially to the track’s heft.      A few other tracks really strike me as well.  “Farewell to Stoneybatter / An Raibh Tú ag an gCarraig / March at Kilmore” (jig/reel/march) is a fascinating and non-intuitive combination of tune types that the band pulls off with incredible aplomb. “The Women of Monaghan / …” is an impressive group of jigs set in an unfussy arrangement.  Solo playing weaves in and out of ensemble work on this one, letting listeners hear each player in isolation, but allowing the energy the band members share to come into close focus in different ways.  I also enjoy “Paddy Ryan’s Dream / …,” the blast of reels that closes the album.  The arrangement here is crisp & nuanced and turns on a dime, all the while retaining a very warm and inviting sound.

Begley sings lead on three tracks, “The Snowy-Breasted Pearl,” “Oileán Dhún an Óir,” and “Eochaill.”  His voice is as unique and magnetic as ever and while all three are keepers, “Oileán Dhún an Óir” stands out to me as the finest of the three.  The subtle guitar backing and soft button accordion complement Begley’s fine phrasing, gorgeous tone and nuanced articulation.

Then there’s that track with Reilly.  Reilly, who has starred in such movies as “Talladega Nights: The Ballad of Ricky Bobby,” “Stan & Ollie,” “Boogie Nights” and “Wreck-It Ralph,” is currently playing the lead role in the HBO drama “Winning Time: The Rise of the Lakers Dynasty,” and who done more in career than simply dabble in music, sings the Percy French song “Eileen Óg” and does a fine job.  Begley’s contribution elevates Reilly’s performance and while it’s all a bit of a novelty, the song choice is good and the collaboration is handled well making for a fun surprise.  (And hey – at this point should we be looking forward to some sort of “Hollywood Céilí Band” featuring Reilly and Brendan Gleeson at the 2022 Fleadh Cheoil na hÉireann?)  At the time of writing, Reilly’s track can be downloaded for free at Téada’s website; see link below.

Overall, “Coiscéim Coiligh /As the Days Brighten” is a thrilling album.  The band is in stellar form, presenting an excellent selection of tunes and songs in constantly engaging arrangements, with quite fabulous production.  (The subwoofer in your car stereo will love this album.)  Highly recommended, rush out and get it.  For more information (and to download that Reilly track), visit teada.com.