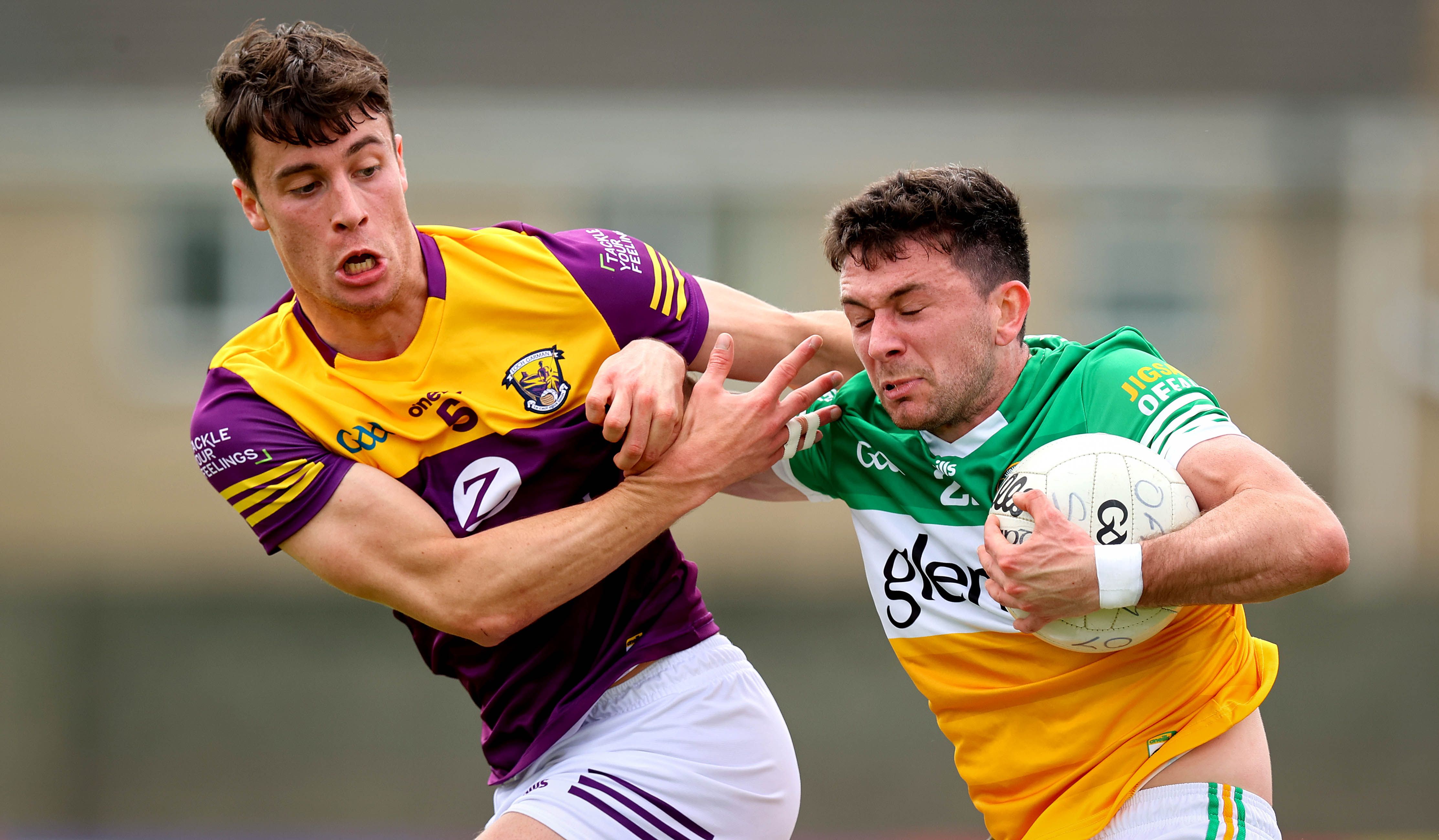 Wexford’s Glen Malone and Ruairi McNamee of Offaly in action during their Tailteann Cup Preliminary Round, in Enniscorthy. See GAA Results from Ireland at the end of this column. INPHO/RYAN BYRNE

St. Barnabas had little difficulty dispensing with the challenge of St. Raymond’s in the Junior A league final for the John Joe McGovern Memorial Cup. Well it looked like trouble for Rays early on as keeper Enright was forced to execute a great save from Tiernan Mathers on the first attack. Exchanges were close for the first quarter as both sides just managed a point, Mikey Brosnan for Barnabas and Stephen Curley for Raymond’s, though Barnabas had a disputatious goal disallowed.

Then for the second quarter Barnabas hit the turbocharger to put 3-3 on the board as Dion Norney, Tiernan Mathers and Mikey Brosnan goaled, plus Dylan Curran and Mathers landed fine long range points. After the break Rays had a player surplus as a Barnabas player was black-carded, but the Rays failed to capitalize as they misfired up front. Then it was back to the Barnabas script as Mikey Brosnan landed a brace after good supply from Ian Kavanagh. Kavanagh then got on the scoring sheet, and big Ray O’Connor showed that if the right doesn’t work, the left did with a finely executed minor. Colum Doherty closed out the scoring for the Bronx Boys, and a few late points courtesy of Shane Slattery, Stephen Curley and Keelan Walsh improved the complexion of the score-board for St. Raymond’s as they struggled to stay in touch with the greater manpower of the fleet-footed Barnabas Boys.

The New York senior football  championship was back to its best in Gaelic Park when Sligo and Brooklyn battled to a bruising draw on Thursday evening. It was a tough, tense and tactical encounter where little quarter was given or asked. The opening exchanges were fast and furious, but there was nothing on the scoreboard for ten minutes as scoring options were resolutely rebuffed by swooping and swarming defenders.

Then Sligo went on a short scoring spree. Cathal Ahearn led the way courtesy of a great diagonal ball from Tadgh 0’Riordan and Ruairi O’Caoileain quickly extended the lead. Ahearn added his second before Johnny Glynn executed his trademark one-handed catch before guiding the ball over the bar. However Brooklyn didn’t come to admire Sligo’s scoring skills and soon Gearoid McDonald tested keeper Cadden with a blistering shot before putting three consecutive points on the board courtesy of McDonald, Stephen Malone and Caolain McGuire with Niall Madine being a critical conduit in the offensive arena.  Both teams added minors before the short whistle, Ahearn for Sligo and Madine for Brooklyn, to leave the minimum between the sides, 0-5 to 0-4.

The second half was a lot different, the umpires were busy as was the referee, but law and order was maintained in an exhilarating, though at times bone-bruising battle. Tony Donnelly scored straight from the throw-in and Ahearn tapped over another after Dylan McCabe was the provider. However, three minutes later Kevin Hannigan levelled with a well-engineered goal, and Ollie McLean came off the bench to put his team ahead with a point. Then for the next ten minutes Sligo looked to have taken control as they chalked up 1-3 without reply. Eric Monahan, O’Caoileain(2) had points before Kevin Reilly struck a goal midway in the period.

Brooklyn battled back as Conor Connolly burst up the field for a point before David Culhane rattled the net after Madine delivered the pass. Then with ten minutes left Kevin Connolly landed a fine point to level but Sligo jumped back in front with an Ahern point. Entering the last five minutes Brooklyn seemed to have the momentum as they put three points on the board, two from Madine and perhaps the best score of the game from Maguire to put them two up with two minutes to go. Sligo got one back and it was left to young Tadgh O’Riordan, to get the equalizer. Yes a draw was a fair result to a great game, but where  are the spectators?.Perhaps they are like Wordsworth’s daffodils!

St. Barnabas easily accounted for Donegal in this senior championship clash. Such was their early dominance they had 2-4 on the board after ten minutes. The Brosie brothers, Shane and Mikey, along Timmy Fitzmaurice hit points, while Tiernan Mathers and Shane Hennessy banged in goals.

Donegal finally got traction with a brace from Peter McNeilis, plus he also forced a good save from keeper Kennedy. The Mathers and Brosnan brothers continued to tap over points and the game looked to be getting well away from Donegal coming up to the break, but then a goal from Sean O’Kennedy put a bit of a sheen on the scoreboard of a rather one-sided encounter, 2-11 to 1-4.

On resumption Barnabas kept the pressure on as Dylan Curran, Fitzmaurice(2) and the Mathers brothers added points plus Tiernan struck a goal from a penalty. Donegal did become considerably more productive for the last quarter as St. Barnabas emptied their bench and their defense got a bit ragged. Peter Carpenter, Kyle Higgins, Sam McCabe  became more assertive to add some late points while Jason Kelly produced one of his trade mark goals to put a veneer of respectability on the scoreboard.

Prior to the game the word was that Kerry would not have the manpower or firepower to stay in touch with Manhattan in this Intermediate championship. That theory was quickly debunked as Kerry managed to get goals at critical junctions to be competitive.  However one man ensured that the Kingdom would play second fiddle, and that was Eoghan Carew.  The Kildare man, despite being close to two score years, is still one of the finest fielders and finishers in the Big Apple. He finished with a personal tally of 2-6.  Meanwhile Ronan Mackle goaled on the first attack after Carew set him up, but Niall Madine added a brace on the other side. Manhattan continued to dominate as Carew(3), Maguire(2) and Mackle fired over points. Then a Cillian Courtney goal and a pointed Madine free had Kerry three in arrears at the break, 1-6 to1-3. Madine goaled straight from the throw-in but Carew had a minor and fullback Davis a major to regain the lead. Soon it was back to the minimum as Pa Griffin knocked a Madine “45” to the net. The next ten minutes would be decisive. Carew would hit two goals and a “45”, plus Grimley proved to be a good supplier as well as a scorer. Kerry had intermittent scores before the Kingdom’s chief danger and target man fielded well for a mark in traffic, but was fouled. His pile-driver free was scrambled over the line by James Smith for a goal to leave Manhattan deserving winners, but Kerry made them earn it.

Mayo led comfortably in this Intermediate clash,  1-8 to 0-5, at the break courtesy scores from Stephen Curley(1-2) Ryan O’Neill(0-2), Shane Slattery(0-3) and Shane McNeilis. Cavan’s marksmen were Ryan Kennedy(3), Stephen Harten and JJ Mathews  After the break Man of the Match Slattery quickly added 1-1 and Tom Conway added a point. However Cavan rallied for the last quarter with some penetrative runs from Kennedy, Shalvey, Mathews and company. The Breffni Boys put 2-7 on the board, with Stephen Harten and Ryan Kennedy getting goals to keep the game competitive. However Mayo were still in control as Slattery goaled a rebound effort from  Curley, and late points from Slattery, Curly and Enright ensured that Cavan were always chasing the game. Referee Peter McCormack.