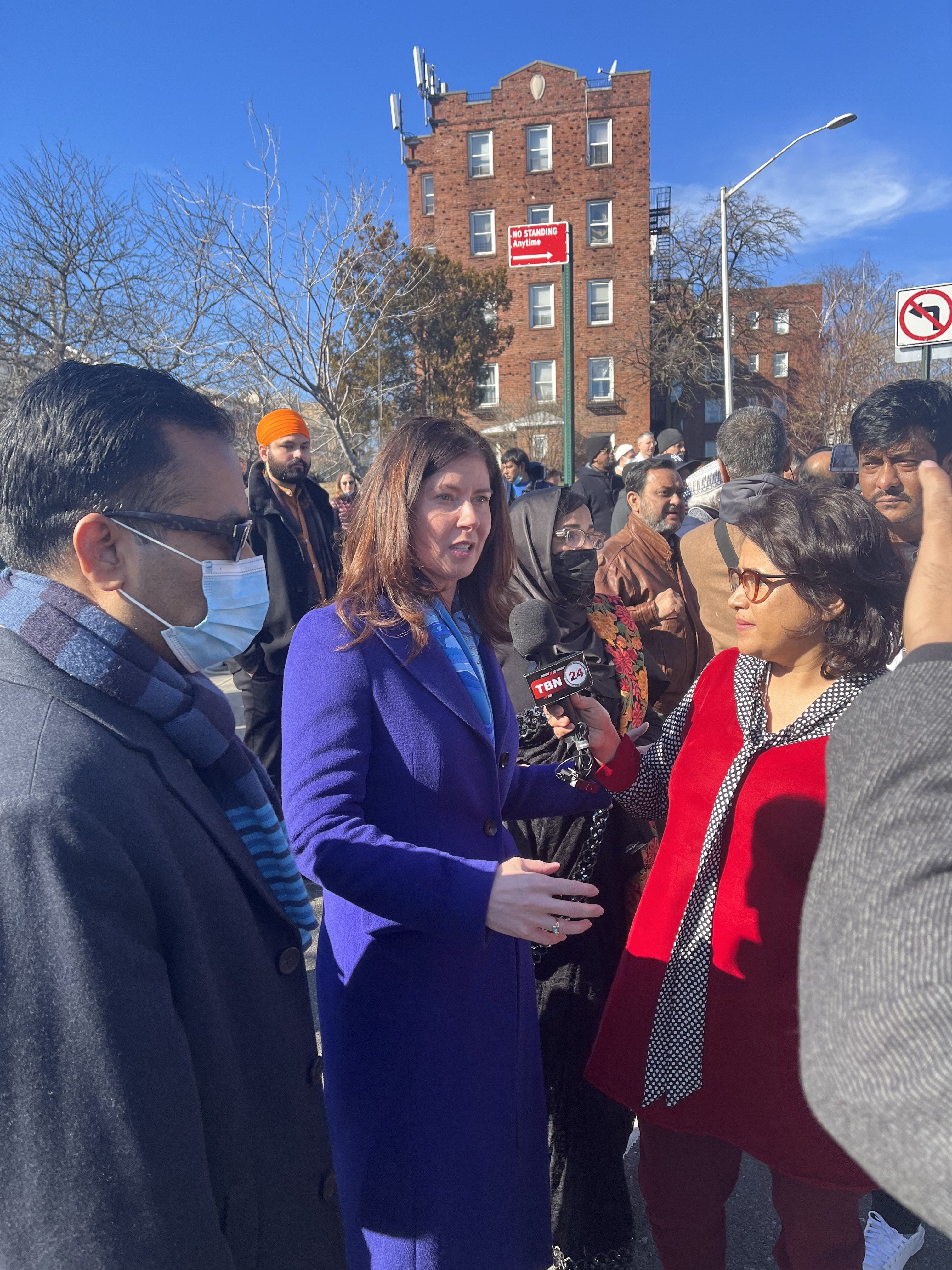 Elizabeth Crowley's political comeback - and New York State and national politics - received a jolt Wednesday, April 27, when the New York Court of Appeals threw out the new congressional and State Senate districts drawn by the New York Democratic Party, ruling that the maps were unfairly gerrymandered in the party’s favor.

The decision pushes back the party primaries for the congressional and State Senate districts from June 28 until August to give time for a court-appointed politically neutral special master, overseen by a trial court, to produce new district maps.

One of those newly drawn districts is District 17 covering all or part of the neighborhoods of Greenpoint, Long Island City, Sunnyside, Ridgewood, Woodside, Glendale, Woodhaven, and Richmond Hill in Brooklyn and Queens.

“This is the district I’ve lived in most of my life,” Crowley told the Irish Echo in a phone conversation before the court’s ruling. “I served as a Council member from 2009-2017; I raised my kids here.”

“I know the concerns that are facing most of our families and they need a fighter that’s going to work to make the district more affordable.”

Asked about her Irish background, Crowley jokes, “isn’t (growing up) one of 15 kids Irish enough?”

The court decision states that current maps were drawn in a “procedurally unconstitutional way” and calls for review and the decision also moves the election to August; as we continue to engage our voters we’ll be looking to the NYS BOE for the next steps

At the head of that big Irish family were father Walter and mother Mary. Both were prominent in local politics. Walter died while a member of the New York City Council when Elizabeth was very young. Mary, who sadly passed away recently, was a prominent school board member.

Crowley told the Irish Echo that her family was involved in the Irish community, mentioning the County Cavan Association. She added, “we grew up with the culture and the connection and I have been to Ireland a number of times, both for pleasure and also for business as a Council member.” For the past decade, the founding member of the Irish Caucus in New York City Hall has always been a strong supporter of the annual New York-New Belfast gatherings.

Crowley mentions that she traveled to Ireland in 2016 for Easter Rising commemorations and to Belfast in 2019 for the opening of the James Connolly Visitor Centre.

Crowley is banking on her experience in the Council as separating herself from her opponents, noting that “what my three opponents have in common is that none of them have experience.”

Of those three opponents, Francoise Olivas, Japneet Singh, and Kristen Gonzalez, it is 26 year old Democratic Socialist Gonzalez that has generated the most buzz.

The Irish Echo asked Crowley if she saw any parallels between her race and her cousin Joe Crowley’s unlikely 2018 defeat at the hands of Alexandria Ocasio-Cortez.

“Right now, as you talk to Democratic voters they value experience, and having served nine years in city council, I'm the only candidate in this race that has experience and the conditions are quite different than Joe's race.”

Does Joe Crowley have me down as an undecided voter?

Can my mailer make it to his Virginia home in time to vote for me absentee?

Do these count as receiving unsolicited selfies?

These questions and more will be answered in the dramatic NY-14 season finale on June 26th 🗳 pic.twitter.com/mbbNCDM9UF

“This is a race where we're coming out to vote for governor and various other offices. When Joe ran he was the only race on the ballot and turnout was pretty low. Right now we have four candidates running for the same spot. So while Kristin Gonzalez may have coined herself as socialist, my other opponents have just as much right to have their progressive agenda or their Democratic agenda, reviewed by voters and respected as a candidate.”

Among Crowley’s priorities should she win the State Senate race are transportation, schools, and correcting what she calls, “a complicated and unfair property tax system.”

Crowley believes that working class homeowners are overpaying on property tax while “billionaires that live in the parts of the city are paying less for property that is worth so much more. This broken tax system allows big developers to build luxury housing and get away with not having to pay real estate tax for a long time to create units that aren’t really affordable.”

Hate has NO place in https://t.co/mDAu7hZnHQ we stand with Sikh brothers & sisters to condemn the unprovoked attack on a 70 year old Sikh in Richmondhill Perpetrator must bring to justice immediately@DavidWeprin⁩ ⁦@JeniferRajkumar⁩ ⁦⁦⁦⁦⁦@ElizCrowleyNYC⁩ pic.twitter.com/Aqs8RPgPfC

Crowley also wants to help the city recover from the hardships brought on by the Covid pandemic, in particular crime. The candidate is hopeful that changes in the 2019 Bail Reform bill introduced in Governor Kathy Hochul’s recent budget will be effective. “There are too many dangerous people on the street with guns and we haven’t been able to get repeat offenders, those charged with gun possession, and those that are a danger to the community off the streets.”

Crowley is proud of her record on education. “I had the most overcrowded school district in the city when I was elected to represent the council district and when I left it was no longer overcrowded. We built four new elementary schools, two high schools and over 6,000 classroom seats.”

Transportation is another important plank in Crowley’s platform.

“I have a transportation plan for the district that would include bringing an underutilized freight line up to a position where it would serve also as a commuter rail, not so much a commuter but a rail that has customer service. And the governor supports a similar plan that's currently underway known as the Interborough.

100%! We also need the QNS "...the city has changed drastically...the residential populations of Queens and Brooklyn have skyrocketed. Employers have migrated outside of Manhattan too, and we’ve seen robust job growth...@MTA @GovKathyHochul https://t.co/Vaxr1EenuV #BuildtheQNS

“It would serve a lot of what is considered a transit desert. We hear the idea of green jobs; this will be a massive infrastructure project that will create jobs, but also create ease in the district where we have a significant amount of congestion.”

Whenever the primary and - if she wins - the general election are held, Crowley, a 44 year old mother of two sons, believes that her experience is what her constituents are looking for.

“Experience is something that I believe is valued more today by voters coming out of COVID. With so much uncertainty, with crime, with the cost of living going up, with real concerns that are threatening our quality of life in New York, experience counts more than ever.”