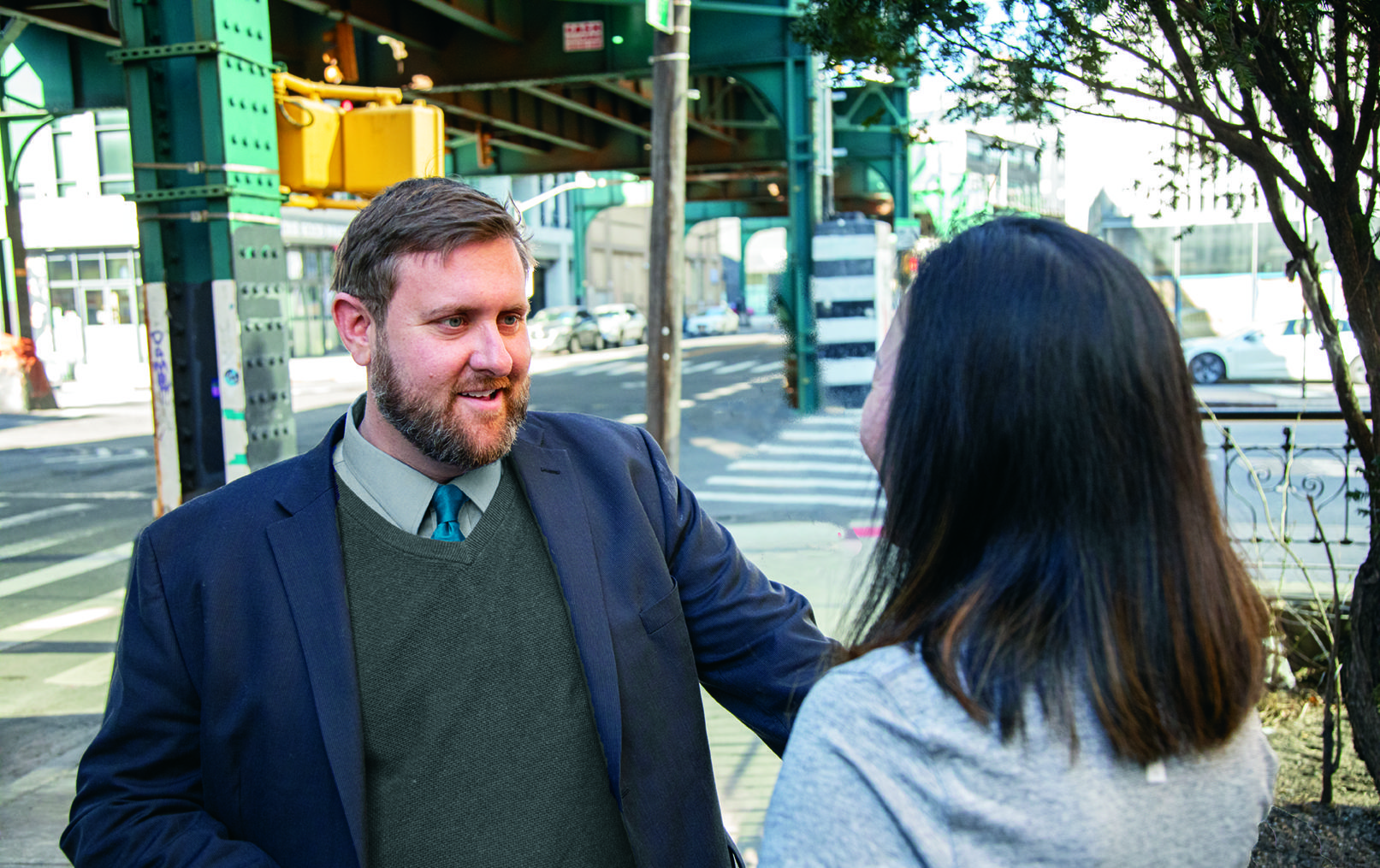 Jim Magee had just returned from Manhattan Criminal Court on a recent Wednesday morning when he took a moment to speak with the Irish Echo by phone about his run for the 37th District New York State Assembly seat that has been held by retiring Assemblywoman Cathy Nolan since 1985.

Big shoes for the novice politician to fill but Magee, a lifelong resident of Woodside, Queens - a neighborhood that falls partly within the district - believes that his resume makes him well suited to take on the challenge.

A 41 year old married father of two young girls, Magee served as an Assistant District Attorney in Brooklyn from 2007 until 2012, prosecuting everything from DWI cases to assault, theft, and drug possesion before moving on to the sex crimes unit, where he became expert on DNA evidence.

Magee moved into private practice from there, working the other side of the aisle as a defense attorney, representing clients on everything from medical malpractice to civil rights cases.

Deputy Speaker Nolan is a force to be reckoned with in the Assembly.

Cathy has delivered over and over again for parents, consumers, commuters, and the people of Queens.

Let's get to work! pic.twitter.com/NVNzY9K6gF

That breadth of experience, Magee told the Irish Echo, “is part of the reason I’m running.”

Described as a moderate by the Queens news outlet the LIC Post, Magee lists a number of issues as central to his run for office.

Given the Democratic Party’s control over the state government for the last three years Magee says he doesn't understand why Governor Cuomo and now Governor Hochul have been hesitant to raise taxes on the super wealthy.

Housing, health care, schools, crime and policing, bail reform, as well as his experience, both professionally and in life.

“Rents are sky-high around here,” Magee told the Irish Echo, adding, “I’m in favor of a moratorium on evictions.”

Citing overcrowding in the New York City public school system Magee wades into the always contentious charter schools debate firmly stating, “I’m in favor of it,” regarding funding of the charter schools by the State Legislature, while emphasizing that he would not like to see these private schools raise tuition.

“The truth is a lot of these private institutions are already up and running, they are already schools, and we are having a hard time building schools in the city.”

Given the Democratic Party’s control over the state government for the last three years Magee says he doesn't understand why Governor Cuomo and now Governor Hochul have been hesitant to raise taxes on the super wealthy.

On homelessness, Magee said, “I applaud Mayor Adams for reaching out to see if people need medical attention, if they are interested in going to a shelter.” Magee adds, “having people on the subway interviewing them (people potentially in need of services) is a step in the right direction. But, if we don’t have someplace to house these people, I don’t know how much can be done.”

Much of the candidate’s problem with the new bail law is how quickly and quietly it was passed into law.

If the Democratic Party does not show that it can manage crime effectively, there will be a voter revolution. It has happened before. And the main beneficiaries of that revolution will be an increasingly unhinged Republican Party.

“The bail reform law took effect in January 2020, right before the pandemic,” Magee began. “I figured it would be a big deal. I always felt that changes had to be made, mostly with the penal code. But there was very little legislative history, it wasn’t debated, and before I knew it, it was done.”

As for the law itself, Magee has several problems with it. “They took several misdemeanors completely out for bail, and one of them is assault. The Legislature took assault in the third degree out from the purview of the District Attorney and the Judge. That means that a suspect could be released on a bench warrant and “there's very little consequences if you don’t come back” for your court date.

Although the Bail Reform bill was passed just two years ago, Magee contends that the bill was a long time coming. "The state government has been extremely irresponsible for 30 or 40 years, since Rockefeller (the Rockefeller drug laws) in not addressing some of the inequities,” he says.

Those inequities, Magee adds, led to “a lot of people sitting in Rikers on cases that were never going to go to trial.”

So while Magee clearly sees that there was a need for bail reform, he just as clearly is unimpressed with the resultant law and believes that he is the only candidate in the race who has the experience to “be helpful when the State Legislature revisits bail reform.”

Magee believes the field of candidates for the seat is likely to grow between now and the Democratic Primary on June 28, 2022.

The better known of Magee’s two opponents is progressive Juan Ardilia, a staff member at the Legal Aid Society who polled at 45 per cent in a losing run for City Council last year against Robert Holden.

Regardless of his opponent, Magee believes he will be the only person in the race who believes in funding the police department.

Staking out a stance at odds with left leaning elements of his party, Magee said, “I don’t understand the idea that in order to improve the police department we are going to cut their budget.”

To illustrate his point, Magee said, “If your problem is the way the police department behaves, the amount of training they receive or do not receive, I do not understand how you are going to get better results by cutting that budget.”

Magee called this race a short sprint, and told potential voters, “if you are concerned about the spike in crime, I think I can be very helpful”  adding, “I’m not doing this to launch a political career, I just think that I can be helpful.”