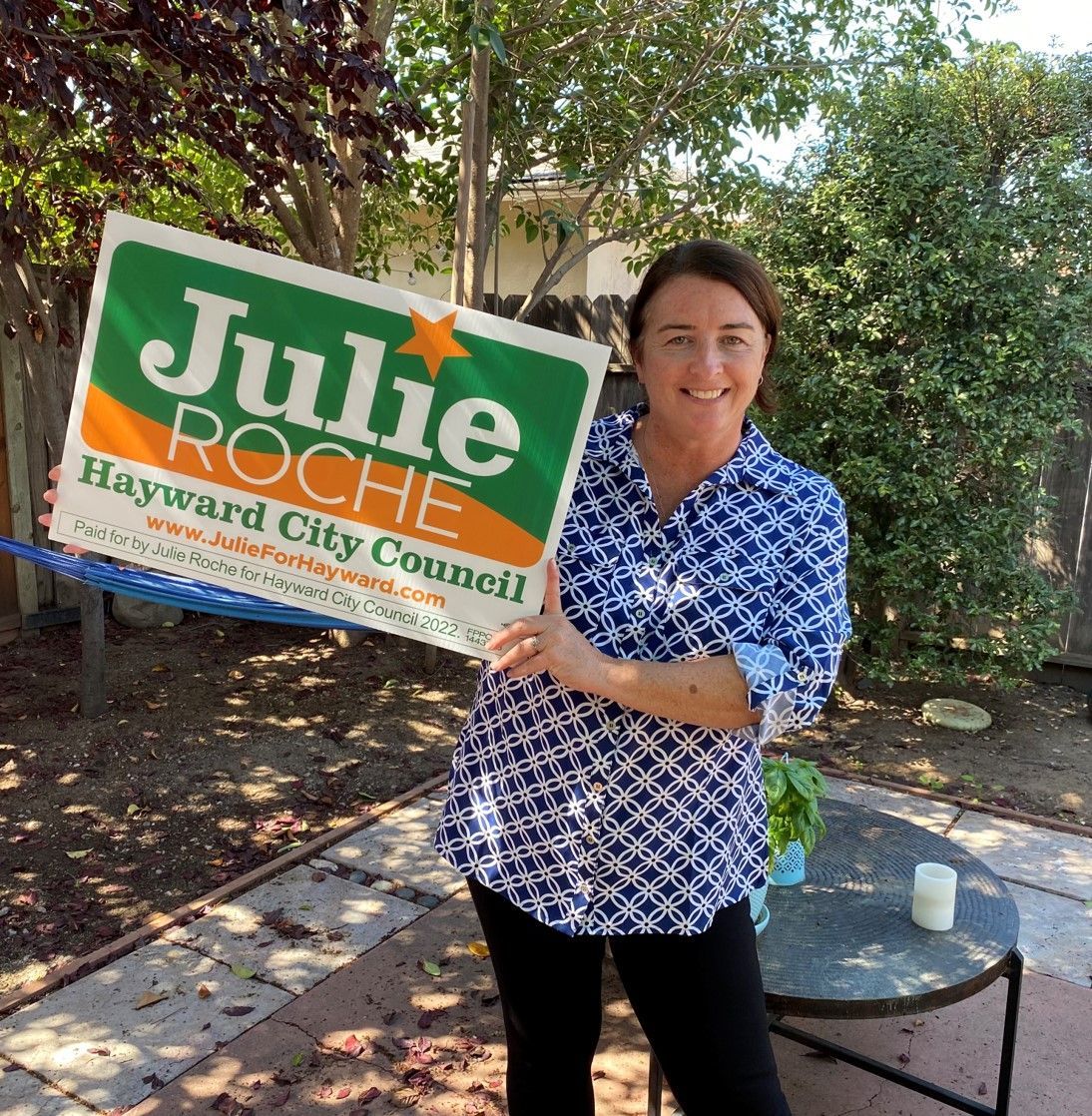 After years spent in the background of politics, both local and national, when Julie Roche decided to step forward and run for City Council in her hometown of Hayward City, California, she proudly waved the green, white, and orange of her parents native Ireland.

The Irish Echo spoke to Roche by phone the morning after her swearing in and asked, why the tricolor?

“A huge part of my identity,” Roche said, “has been Irish American. I was born an Irish citizen.” And while both of her parents would eventually become naturalized as U.S. citizens, Roche notes that, “most of my extended family is still in Ireland. And I'm just proud of that.”

Roche campaigned on a wide range of issues, singling out pandemic recovery, the economy, clean, safe streets, homelessness, housing, and the environment. Roche’s father, Aidan Roche, is a physicist who studied the ozone layer and the upper atmosphere, and Julie remembers conversations around the dinner table concerning the effects of ozone depletion on the environment.

The newly elected City Council Member describes her Bay Area hometown as a very diverse city, so the tricolor didn’t cause that much of a stir with the voters.

“But,” Roche added, “it was kind of fun explaining it. Why I did that and why it was important to me. There wasn't much recognition. Everyone just thought they were sort of bright, happy colors.”

A 53-year-old mother of 11 year old son William and nine year old daughter Nora, Roche has been married to Robert Schram for 16 years, moving to Robert’s town of Hayward City and putting down roots. Roche, an attorney, described her earlier roles in politics in Washington D.C. and Colorado, “as more of a consultant, in the background.”

Moving to Hayward City and starting a family set Roche on the path to her current job.

“I was involved in my kids' school (including serving as a substitute teacher) and the neighborhood and the local board and our swimming club,” Roche began. “And once we bought our home in 2009, I decided that I really wanted to be proud of our city.  I wanted to feel as proud of it is where I'm originally from: Palo Alto, California.”

From there Roche began serving on commissions in the city, including the planning commission, where a current Council member suggested to Roche that she should consider throwing her hat into the ring.

Roche found the move into the limelight to be, “nerve racking, exhausting, and exhilarating.” When she was frustrated she took encouragement from, “each time you had a great meeting, or good forum.” Those positives kept her going, leading Roche to think, “I'm good at this.”

Roche campaigned on a wide range of issues, singling out pandemic recovery, the economy, clean, safe streets, homelessness, housing, and the environment. Roche’s father, Aidan Roche, is a physicist who studied the ozone layer and the upper atmosphere, and Julie remembers conversations around the dinner table concerning the effects of ozone depletion on the environment. Conversations that no doubt influenced the younger Roche and her future choice of campaign issues.

Roche’s father studied at University College Galway, now known as University of Galway/Ollscoil na Gaillimhe, before doing his doctorate in Liverpool. His daughter describes Aidan as being from Athlone and Galway, while her mother hailed from Limerick.

Congratulations Dan Goldstein & Julie Roche, for running a great campaign; it was a pleasure talking to you both during our public events. I wish you both prosperous years on the council and continued leadership for the future of Hayward. 1/2 pic.twitter.com/uwOKzGrFRn

“I’m really proud of him," she said. "He mainly studies the upper atmosphere, and he's actually flown an experiment in the space shuttle. We all got to go to Florida and watch the launch. So he's done some really cool things.”

Roche credits her mother’s illness in part with her own desire to contribute her time and energy to serving her community.

“I was actually working at a senior center when she started her dementia. I was doing fundraising and there was a capital campaign to rebuild the Senior Center.”

Roche was not happy with what she saw when her mother became ill, telling the Irish Echo, “I wanted to help out because my mom was so young when she started her early dementia that she was being taken advantage of and we didn't even realize it. That was when I realized, oh, man, these people need protection.”

Roche believes that change can happen on the local level. “Yeah. In fact, Hayward has done amazing things. There was just a report out that Hayward has reduced their greenhouse gas emissions by something like 40 per cent which is way above our original targets.

Roche has her sights set on tackling the housing issue. “The cost of housing is just crazy. People can't afford it. So what are we going to do about that? I think it is probably going to be the biggest issue of my tenure on council. If we could do something to affect rents, if we can do something to provide more subsidized affordable housing, I think those are going to be really big issues.”

Roche will take up her seat next week but I wondered if Roche can see herself going further than the City Council in the future. “It’s funny," she said, “I didn't really think of that before because when I started it took another council member to say, I should be good at this. But you know, now that I've won and I really enjoyed the campaign. I guess I'll see how these years go. I thought I'd give it a couple of years and see how that feels If I'm good at it. And then, you never know, I didn't think this was my path at this point in my life but, but so far, I'm liking it.”