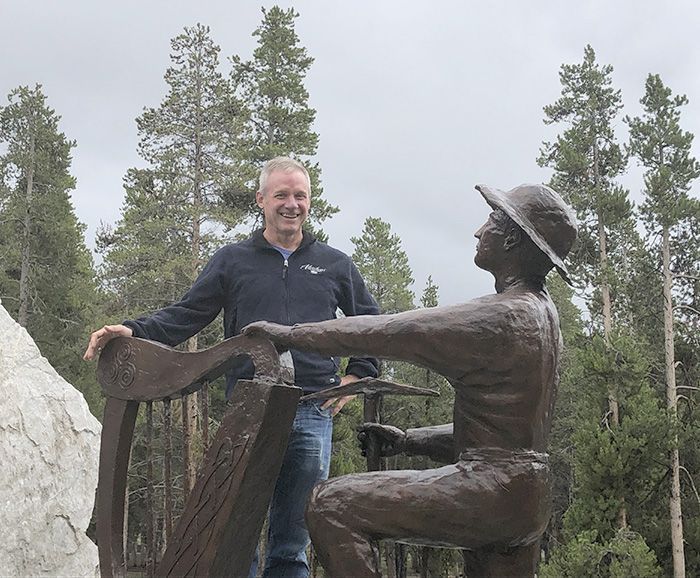 Put it down to a New York - centric big city bias but when I think of the Irish diaspora my mind automatically drifts to Hell’s Kitchen, the Marble Hill/Kingsbridge neighborhoods of my youth, Woodside, Queens, Woodlawn in the 80s and McLean Avenue of today.

Not forgetting Massachuesettes, in particular the South Boston neighborhood of Southie. Chicago and San Francisco too, lay claim to being prominent Irish outposts.

Then again, it is hardly news that a good many Irish continued west to chase their American Dream, some making it as far as the West Coast, as far again as the trip across the Atlantic, though this time over land rather than sea.

it was really neat to see the progress on the memorial to the Irish mining community of Leadville in the 1800s, many of whom died young and were buried in paupers' graves in the Evergreen Cemetery in Leadville. Last time I visited it was just a mound of dirt. @ColoradoPaddy pic.twitter.com/y5vDHmBO3H

Others settled somewhere shy of the Gold Coast; a family legend on my mother’s side has a pair of brothers, her uncles, landing in Montana some time in the early 1900s. They lost touch with family, and, the story goes, when tracked down decades later by an adventurous nephew, the one surviving uncle had forgotten he was even Irish-born.

Which brings us to Leadville, Colorado where one of the largest silver rushes in American history began in 1877. The worst years of the Irish Famine were a living memory for many of the Irish in America at the time, so it is hardly a surprise that a sizable number of Irish made their way to Leadville.

So many, in fact, that the town became home to “the most significant Irish community and in the entire region between the west coast and the Midwest. “There were as many as 3,000 Irish born people living there at a given time in the early 1880s,” according to James Walsh, Associate Professor of Political Science at the University of Colorado Denver.

It was while Walsh was researching the Irish in the area for a planned book that he was introduced to the Evergreen Cemetery. As Walsh describes it, “in the back of the cemetery, of the pauper cemetery, the part that the Irish are buried in is called the Catholic free section. So it's a free burial for the poor.”

Walsh told the Echo that of the total of 6,000 graves in the pauper section, approximately 2,000 are in the Catholic free section. Walsh painted a moving picture of “sunken graves that stretch for acres, through a pine forest, unmarked for the most part.”

“Some descendants,” Walsh added,” have put stones in over the course of the past century, there's an occasional stone. That’s maybe three or four percent.”

Walsh continued, “and then there are these wooden slabs that they’ve marked. Just crude slabs of wood that they have etched the name into, but they've all rotted and broken.”

To Walsh these acres of sunken graves marked by battered wooden slabs represented, “a sort of a sacred space in the Irish diaspora.”

The records, Walsh said, showed that about two thirds of the (buried) were Irish or Irish Americans. He explained that many were famine refugees, and famine orphans.

The historian was struck by the average age of the deceased, 22 years old, calling the statistic, “eye opening.”

“Yeah, it's something like 45% are under the age of six,” Walsh told the Irish Echo. “So it's a really sobering space. It speaks to class, it speaks to industrial labor. It speaks to the lives of immigrants who made their way to these mining camps in the 1880s. Inadequate Housing without health care or education, with poisoned water; there was a smallpox epidemic that broke out.”

To Walsh the lives of the people buried in these graves represented, “a new dimension in the public history of the Irish diaspora, which tends to focus on either the famine, or the success stories like the Kennedys. The industrial labor dimension of that story is widely ignored, the human toll of industrial labor. So that was the impetus. And the effort started six years ago.”

The effort to memorialize these largely forgotten members of the Irish diaspora began when Walsh had the idea and reached out to Adrian Farrell, who was then Consulate General for the region, and based in Austin, Texas.

Walsh described Farrell as “very moved by what he found there,” saying of Farrell, “he was a real catalyst in building a relationship with the Irish government.” The next big step forward for the memorial came in 2019, explained Walsh, “when Ambassador Daniel Mulhall visited with his wife, and they were very, very moved.”

With the Irish government contributing, “at least half the funds,” said Walsh, the project was up and running.

“It will be a space to remember and recognise their struggle.”

A statue made in Co Wicklow is set to depart these shores for the US, where it will be the centrepiece of a memorial to more than a thousand Irish immigrants who are buried in unmarked graves in Leadville, Colorado. pic.twitter.com/EJhPRCrtGo

Irish artist Terry Brennan was given the task of making a statue to be placed at the memorial site along with the names and ages of the interred engraved into glass panels.

Wicklow based artist Brennan told RTE News “it gives me great pride to be involved in this project. The elements are; you have the miner with his ax, the harp is the long-held symbol of Ireland, there are four strands on the harp to represent the four provinces. Then there are two Celtic symbols on the harp.”

"The harp will sit into a rock that will be mined out of the Rocky Mountains over there. It will sit on a circular plinth that will have the hands of a compass pointing towards Ireland so the connection will be made."

Walsh noted that the names of all of the people buried in the Catholic section are to be included, not just the Irish.

You may be saying to yourself, “didn’t I read that this statue was already unveiled this past September?” Well, not quite.

Allow Walsh to explain. “It was more of a celebration because the statue was finally in place, so we had a celebration. So, it was kind of an unveiling with the grand unveiling next year.”

Is the statue complete? “It is. The statue is in place.” As for the entire memorial, Walsh informs, “it’s going to be all completely finished next September. We're having a grand unveiling next September.”

So, while the statue itself has been completed, important work remains to be done. Walsh mentions, “the raised mound, we have spiral walkways that lead to the top to the center. Those are finished. So we just have some kiosks to put in the glass panels with the names. Some of the bells and whistles. It's quite a large memorial.'

Seven years then from Walsh’s first visit to Evergreen Cemetery, and 146 years from the start of the Leadville, Colorado Silver Rush, Ireland’s forgotten will be remembered at last.

For Walsh the time spent will have been worth it.

“It's going to be an important space of reflection for people to think about 19th century Irish immigrants.”