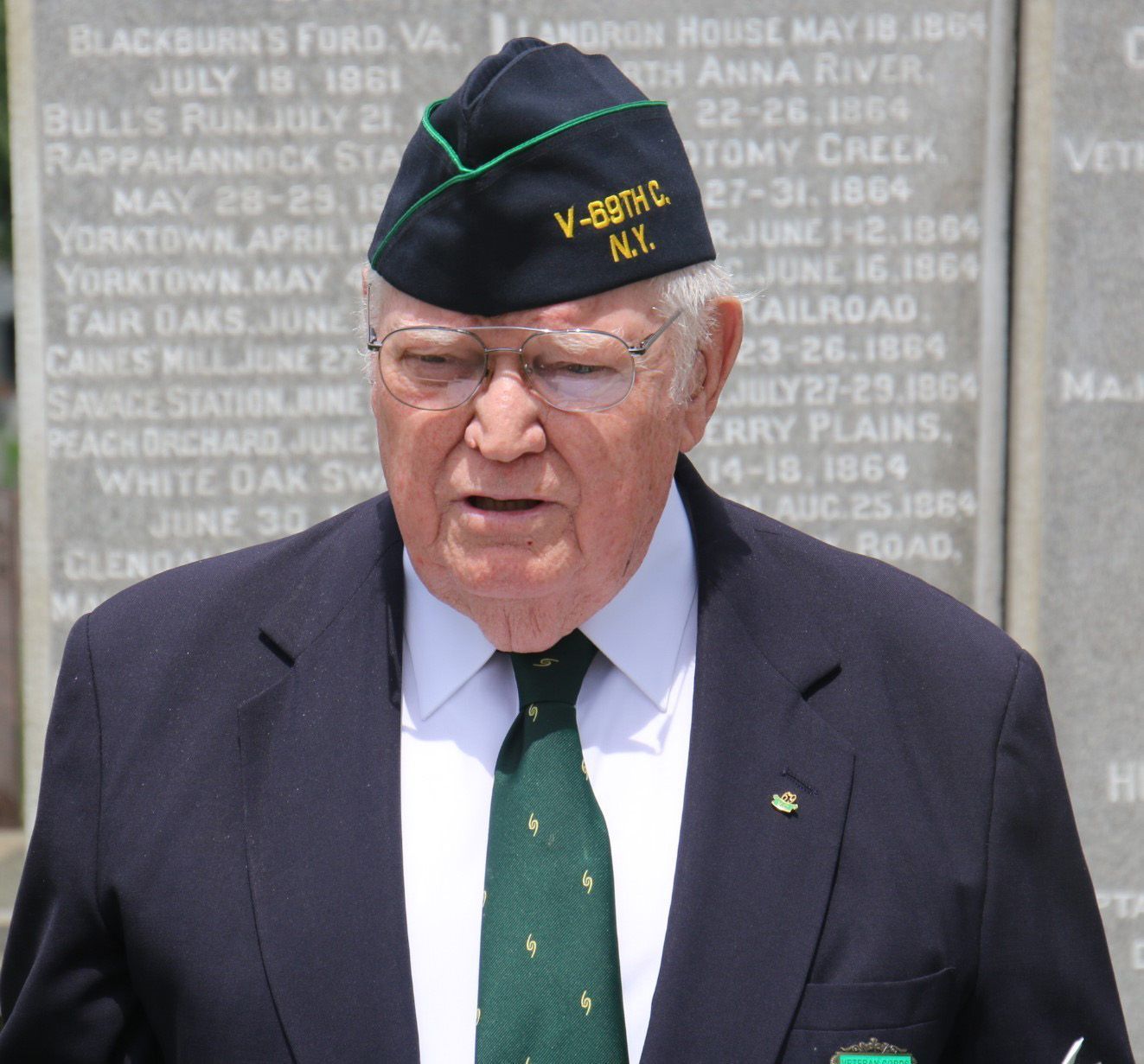 Previously called the Beefsteak Dinner, the event is held on the first Friday of each November to honor the veterans of the Makin Island battle in World War II when the 69th, then called the 165th Infantry Combat Team, led the beach landing on the central Pacific atoll on November 23, 1943.

The Makin Day Dinner is organized by the members of the Veteran Corps 69th Regiment, which Tom Fitzsimmons led for several years as the group’s Commander.

At 92 years of age, CSM Fitzsimmons was unable to attend the dinner but his daughter Eileen Scheiner was in attendance and was proud to accept the honor on her father’s behalf.

Scheiner told the Irish Echo that “not being able to be at the dinner was heartbreaking to him,” adding, “growing up, our lives revolved around him being in the National Guard.”

For Fitzsimmons, a former New York City Police detective, this honor was a lifetime in the making. Fitzsimmons first visited the 69th Armory in 1944 at just 14 years of age. Although too young to join the famous New York National Guard Division, the youngster was back two years later to sign up.

Coming of age during World War II, it is unsurprising that young Tom was drawn to the Fighting 69th, a nickname the regiment is believed to have been christened with by no less formidable an adversary than Confederate Army General Robert E. Lee.

Founded in the late 1840s, the 69th was part of the Irish Brigade made up of New York infantry regiments recruited from the Irish community and is a New York Infantry Regiment of the United States Army.

The regiment’s reputation has inspired songs from major artists like The Wolfe Tones (The Fighting 69th), a movie starring no less an Irish American icon than James Cagney, (The Fighting 69th), numerous books, and a poem by a member of the 69th, Sgt. Joyce Kilmer, who was killed in battle in World War I, “When the 69th Comes Back.”

Over its long history the 69th has been deployed in four wars, the Civil War, both World Wars I and II, and the Iraq War and is currently deployed to Camp Lemonnier, in Djibouti, on the Horn of Africa.

Currently, the regiment consists of a single light infantry battalion (1st Battalion, 69th Infantry Regiment) and is part of the 27th Infantry Brigade of the 42nd Infantry Division.

Throughout its distinguished history the regiment has also become known for stepping off at the head of New York City’s St Patrick’s Day each year.

Flanked by a pair of massive Irish wolfhounds the Fighting 69th has become a familiar and welcome sight leading the world’s oldest and largest St Patrick’s Parade up 5th Avenue.

Perhaps never more so than when the parade was effectively shut down in 2020 due to the COVID-19 pandemic and the 69th, wolfhounds in tow, were part of a small contingent that marched a short distance up 5th Avenue to keep the tradition alive.

Known as “Mr Fighting 69th” among his peers, Fitzsimmons served in Alfa Company from 1946 -1972, reaching the rank of First Sergeant. Fitzsimmons was also assigned to the Division Staff of the 42nd Infantry and briefly served as the CSM of the 53rd Troop Command.

From 1972 until 1983 Fitzsimmons served as the Command Sergeant Major of the 69th Regiment and continued to serve the soldiers of the Fighting 69th as Commander of the Veterans Corp.

Notably during his tenure as CSM, Fitzsimmons instituted the Family Support Fund, which provides a much needed financial boost to families of deployed soldiers and also started a scholarship fund that has awarded $30,000 to nine qualifying soldiers over the past three years.

Married for 71 years and the father of four, Fitzsimmons' daughter Eileen told the Irish Echo that “the National Guard meant everything to him, it still does.”