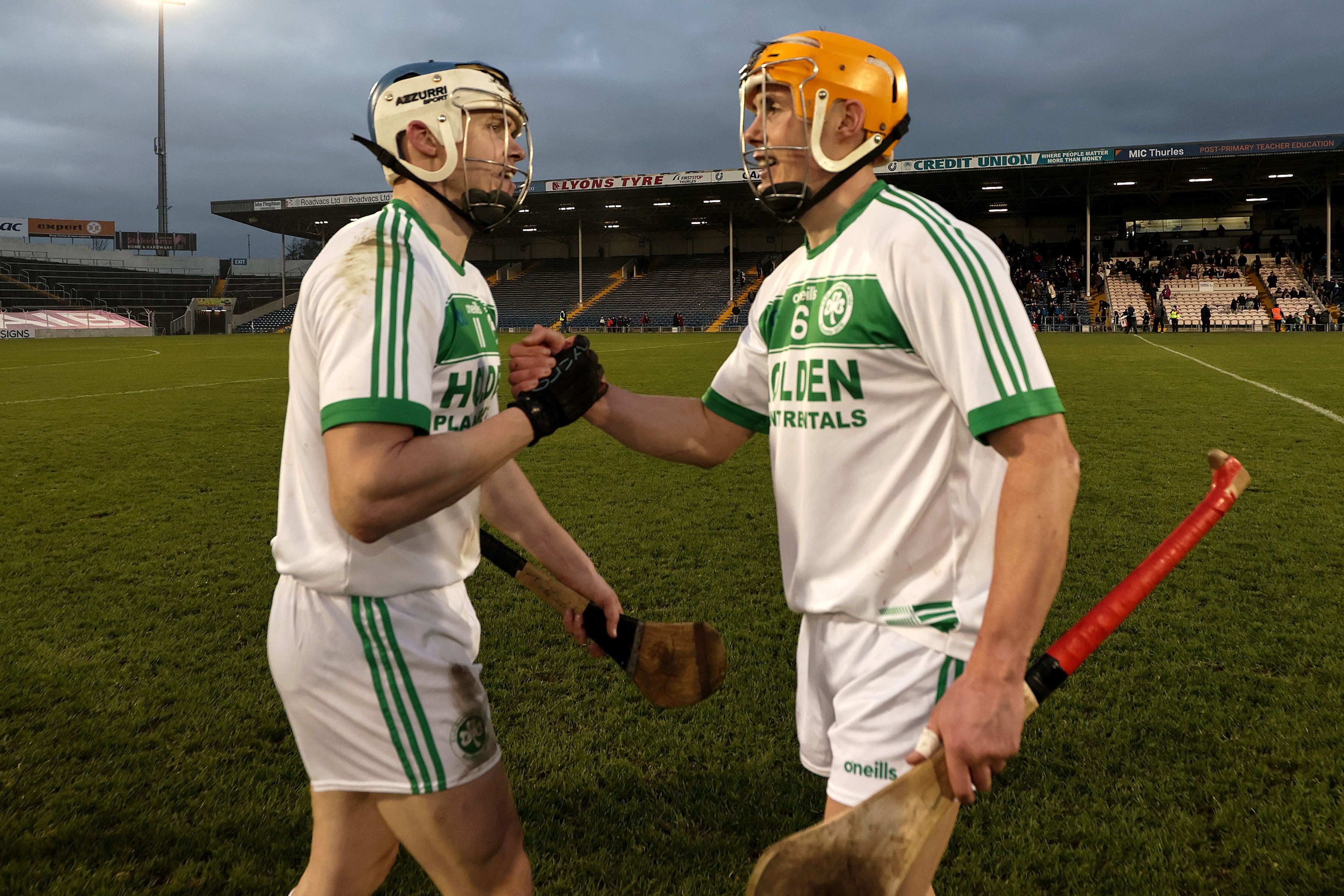 How do you legislate for TJ Reid? You may have Ballyhale Shamrocks by the jugular and are just waiting for them to stop breathing when this superman of a hurler decides that anything Roy of the Rovers can do, Roy of the Reid can do better.

Let’s be honest, this sort of ending where a hurler releases an exocet from 35 yards out and it explodes the back of the net is almost too corny to contemplate for fiction, isn’t it?

Sometimes they say truth is stranger and maybe more spectacular than fiction and Semple Stadium in Thurles found out on late Sunday afternoon.

The Galway team had done magnificently to slightly hold the upper hand in the final minute of added time with a two-point advantage.

That lead though is a dangerous number where the Shamrocks are concerned. Just ask Offaly’s St Rynagh’s who were caught with a similar sucker punch deep into injury time in the Leinster semi-final before Christmas.

We now know that this collective Shamrocks squad is never dead even when it looks like the opposition has suffocated  the life out of them.

TJ’s goal was like an electric shock to a cardiac patient – it catapulted the Kilkenny kingpins back into business and makes them the overriding favorites when they take on Waterford’s finest in Ballygunner in next month’s All Ireland final.

Shamrocks manager James O'Connor was the one man who was sure all was not lost when TJ stood over that far out free on Sunday knowing that a green flag would bring them to their third final appearance in a row.

“I was hoping and praying to God he wouldn’t miss it, but I knew I had the right man standing over it," said the thankful manager.

"At the angle he was, there was a good crowd of defenders in and around there. Sometimes guys can crowd each other out inside. I knew it was the last chance. Some things are meant to be and I do think this team are meant to get to an All-Ireland final. What we do on the day is another thing.”

O’Connor was honest enough to admit that his charges were off-color for big tracts of the game and were fortunate in many ways to get out of Dodge still standing.

“We didn’t bring our 'A' game, and I was disappointed in that, but to win by a point or 20, we’re in an All-Ireland and that’s all that matters."

Speaking on RTE on how they also won in similar fashion against Rynagh’s, he went on: “It’s great to get over these types of games. It gives you unbelievable character going forward. I would hope the team would learn from that game, got that scare from the Leinster semi-final and this semi-final and hopefully we will bring a much better game to the final. Ballygunner are a fantastic team, the up and coming team in the country, without a shadow of a doubt. They are going to bring a huge, huge challenge to us," he stressed.

St Thomas’  showed themselves to be a fine team full of character around the pitch and Fintan Burke will bemoan his rash decision to give away a free which admittedly most people thought was outside the range for a direct shot for goal.

When it is a case of score or go out of the competition, there is probably no player in modern hurling more lethal in such a situation as Reid, as Thomas’ will attest to this week. That goal meant he had scored 2-5, a low enough return for a man who is a scoring machine in virtually every game he has played in the past decade.

It takes two teams to make a memorable contest and St Thomas’ went about their task from the start and had three points on the scoreboard before the Cats registered their first score.

Reid slotted over their first score to answer Eanna Burke’s early strikes and then, Joey Cuddihy  landed two more, with Eoin Cody also getting up and scoring with a brace of beautiful points.

In the context of the play, the men from the west were the better team and Conbor Cooney exploited their superiority with six points from frees to go along with Eanna Burke’s four white flags, though he should also have goaled after Oisin Flannery put him through..

The losers led by  0-13 to 0-11, though they would suffer from the loss of the injured Shane Cooney in their defense.

Reid missed an early second half chance but even when the Saints went four ahead via  Darragh Burke and Cooney (free),  they were far from home.

Midfielder Patrick Mullen woke up his colleagues with a fine point before the Shamrocks  struck for their first goal when Colin Fennelly was upended by John Headd inside the ’13-meter zone.

Reid found the net from the resultant penalty to level the game with only three minutes remaining.

The courage of St Thomas’ was to be admired as they took that shot on the chin and came back up the field to earn two long range frees which Cooney expertly stuck between the posts to give them a two-point lead.

Everyone, maybe except Reid and his manager felt that those scores were enough to edge the Galway champions home, but then we had that bubble in time which we only get to witness once in a blue moon.  TJ Reid lifted and broke hearts in equal measure with one moment of sublime talent and power. Truly a modern day Cuchulann.

Billy the hero for ‘Gunner

Ballygunner had to pull out all the stops to keep the Ulster underdogs at bay, knowing that the roles will be reversed when they take on Ballyhale Shamrocks next month in the All Ireland SH club final.

Corner forward Billy O’Keeffe was the winners’ hero as his two goals made the mountain too steep for the Derry men to scale on a day when they left nothing behind in terms of effort at Parnell Park on Sunday afternoon.

This was the eight times Waterford champions first big test after having a light run through Munster culminating with a big win of Kilmallock in the provincial final.

Aside from the excellent O’Keeffe, the classy Dessie Hutchinson, Mikey and Kevin Mahony were also good at getting vital scores, though it must be said Ballygunner weren’t good enough on the day to put their opponents away.

Indeed it wasn’t until after the break that they got on top and held a seven-point lead. Their wide count though meant they still weren’t out of sight and when Shane McGuigan expertly finished for Slaughtneil’s only goal close to full-time, it looked for a few moments that the Northern outfit could possible come from behind and cause a major upset. Just as the big northern support were gearing up for a grandstand finish, Hutchinson slapped over two late points to flatten any hopes of a fairytale finish.

Farney men hold on for McKenna

Monaghan  may be one of the smaller counties but they aim big and now that they have silverware in the cupboard for 2022, they will scan the horizon and look to march forward through the league and the Ulster championship with more than hope in their hearts.

They showed their class initially and then their character to withstand a strong Donegal fightback at Healy Park to hang on for a one-point winning margin. This was sparked by the emergence of Michael Murphy in the second half when he scored six points and almost single-handedly got his team over the line.

The Farney men will return to the same venue this weekend to face All-Ireland champions Tyrone in their opening league game and should be boosted by the return of their talisman Conor McManus who has yet to make his season bow.

A good start is often half the battle between Ulster teams and when Dessie Ward burst past a startic Donegal rearguard  to goal after four minutes, the Monaghan tails were up.

Ciaran Thompson had the chance later on to negative that score but his shot  was well blocked by Rory Beggan.

Losing by six, 1-7 to 0-4 at the break, Donegal needed something special to buoy them up – and got it with the emergence of Murphy for the second moiety.

It didn’t happen immediately as Monaghan continued to dominate on the scoreboard stretching their advantage out to nine points following a brace of free from Michael Banningan and an excellent Colin Walsh effort from play,

Murphy began chipping away at the lead with a couple of frees and a Ryan McHugh rasper cuts the deficit to six.

The losers then entered a purple patch with a run of five points on the  trot as Monaghan fired blanks for 18 minutes. It ultimately went down to the wire with Monaghan holding out as Donegal came up short but showed in that second half period that they are hard to stop when they get into a scoring groove.

In the O’Byrne Cup final, it hardly came as a surprise that Dublin beat Laois despite losing John Small to a 31st minute red card in Carlow on Saturday on a 1-13 to 0-11 scoreline. In the McGrath Cup final, Jack O’Connor’s Kerry were way too strong for an experimental Cork team and ended up 12-point winners before a massive crowd at Fitzgerald Stadium on Saturday.