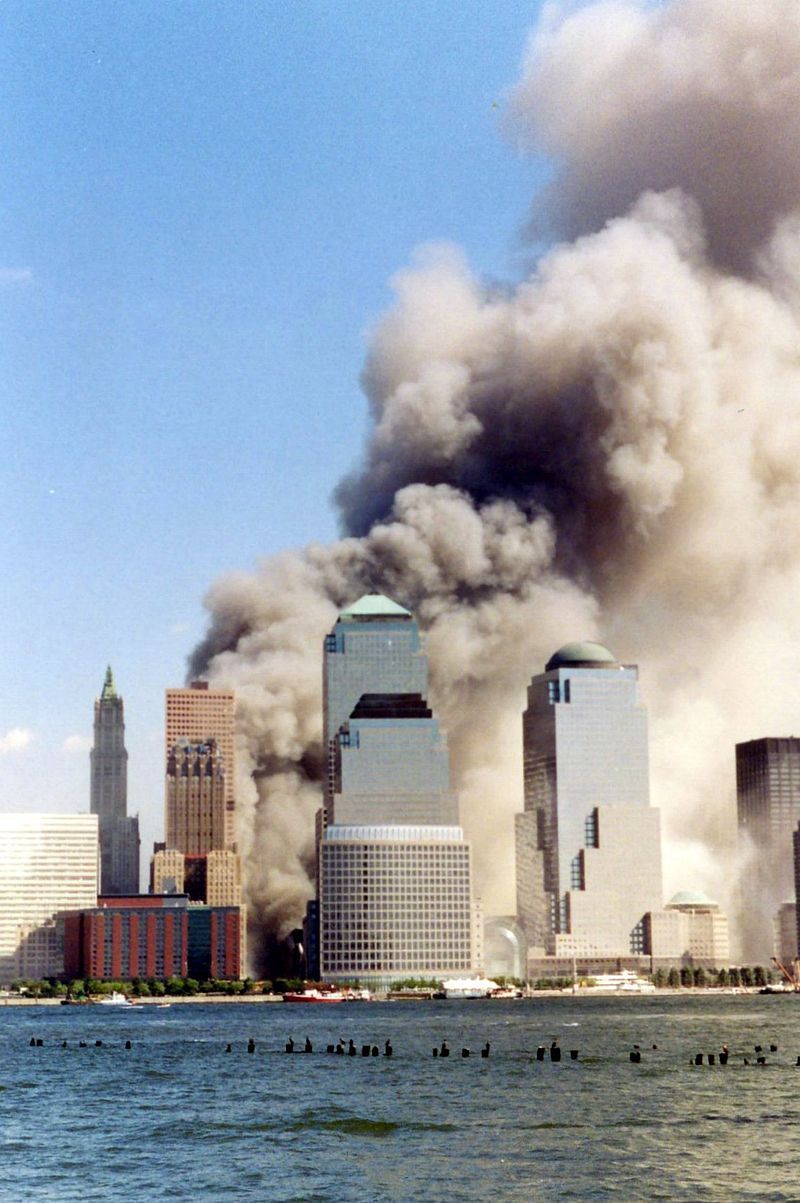 Lower Manhattan after the collapse of the World Trade Towers.

I was checking the Mets box score when the plane thundered overhead. I slammed my forehead onto the table, certain my building would be hit.

Moments later there was a thud in the distance, not unlike a giant sledgehammer striking concrete.

Counting my blessings, I rushed up to the roof and beheld an unforgettable sight – an airliner jammed into the upper floors of the North Tower, with tongues of flame darting out of thick black plumes of smoke.

The world changed that morning and New York City went into a tailspin. The once throbbing streets of Midtown were deserted. Who knew what skyscraper would be the next target?

There was a need for normalcy, but what was normal anymore?

Well, for the “house band of New York City” it was simple enough. If we weren’t on the road Black 47 played Saturday nights at Connolly’s in Midtown.

Talk about intense gigs! I can still feel the early aching chill that in the course of the night would morph into emotional abandon. Many in those full houses were first responders who had come up from the pit, eager for drink, company, and some manner of release.

But not for a moment were any of us unaware of what we were trying to escape. Many who had been in the vicinity of the Towers were still deemed “missing” – their pictures, accompanied by scrawled notes seeking information, littered the railings of St. Paul’s Chapel on Broadway.

And every time Connolly’s door opened heads swung round and people rushed over to hug someone else who had survived. And the talk would be, “John made it out,” or “Mary hadn’t gone into Cantor Fitzgerald that day.”

But for a long time the task was beyond me. Black 47 gave its all with the "New York Town" album, that contained "Mychal" and "Orphan of the Storm," songs that captured some spark of those who didn’t make it out alive.

But after a month of such Saturdays it became obvious we’d never again see Michael, Michelle or the many others whose names we never knew. That was the genesis of "Rockaway Blue" – to tell the story of the regular New Yorkers who hadn’t survived, and to commemorate those who had.

Even on those early blistering Saturdays their story was already being highjacked by the politicians, the media, and the barstool patriots who would lead us into their disastrous wars of choice.

We’re reporting live from 9/11 memorials to commemorate the 20th anniversary of the terror attacks. Today we’re in #StatenIsland where the #postcards monument stands. The view goes straight over New York harbor to lower Manhattan where the towers fell. pic.twitter.com/kzC91BM7SY

Left behind in the dust and rubble of Downtown were the stories of John and Mary, Michael and Michelle. It should have been an easy enough task. I had the lives of friends like Richie Muldowney FDNY and Father Michael Judge OFM to draw on, and God knows there are so many broken hearts still desperately holding on to the fading essence of those they lost.

But for a long time the task was beyond me. Black 47 gave its all with the "New York Town" album, that contained "Mychal" and "Orphan of the Storm," songs that captured some spark of those who didn’t make it out alive.

But that was only half the story. What of those who had no choice but to pick up the pieces and carry on? And so I turned to playwriting.

And in "The Heart Has a Mind of its Own," I created the Murphys of Rockaway Beach who lost their son, Lt. Brian Murphy NYPD, on the fateful day.

But though audiences liked the play I knew I’d blown it. I hadn’t come to terms with the complexity of Brian’s father, Detective Sgt. Jimmy Murphy, and the difficult relationship he’d had with his son. And so I let the story rest, but the memory of those galvanic September Saturday nights wouldn’t let go.

“Finally, I set the story in novel form, and it began to work because I could delve deeper into the characters of the Murphys, their stoic heroism, but also their human flaws and fractured relationships.” Years of frustration followed, flinging one draft after another at the wall, until one dark night I discovered that the story wasn’t working because I had made Brian’s mother a victim.

Despite all she had gone through, Maggie Murphy still needed to rekindle the faith and love that might save her marriage. And with that, "Rockaway Blue" finally knit together and became what it was always meant to be – the story of the regular New Yorkers who sacrificed so much, yet came through the tragedy of 9/11.