Home Johnny V gets his Irish up 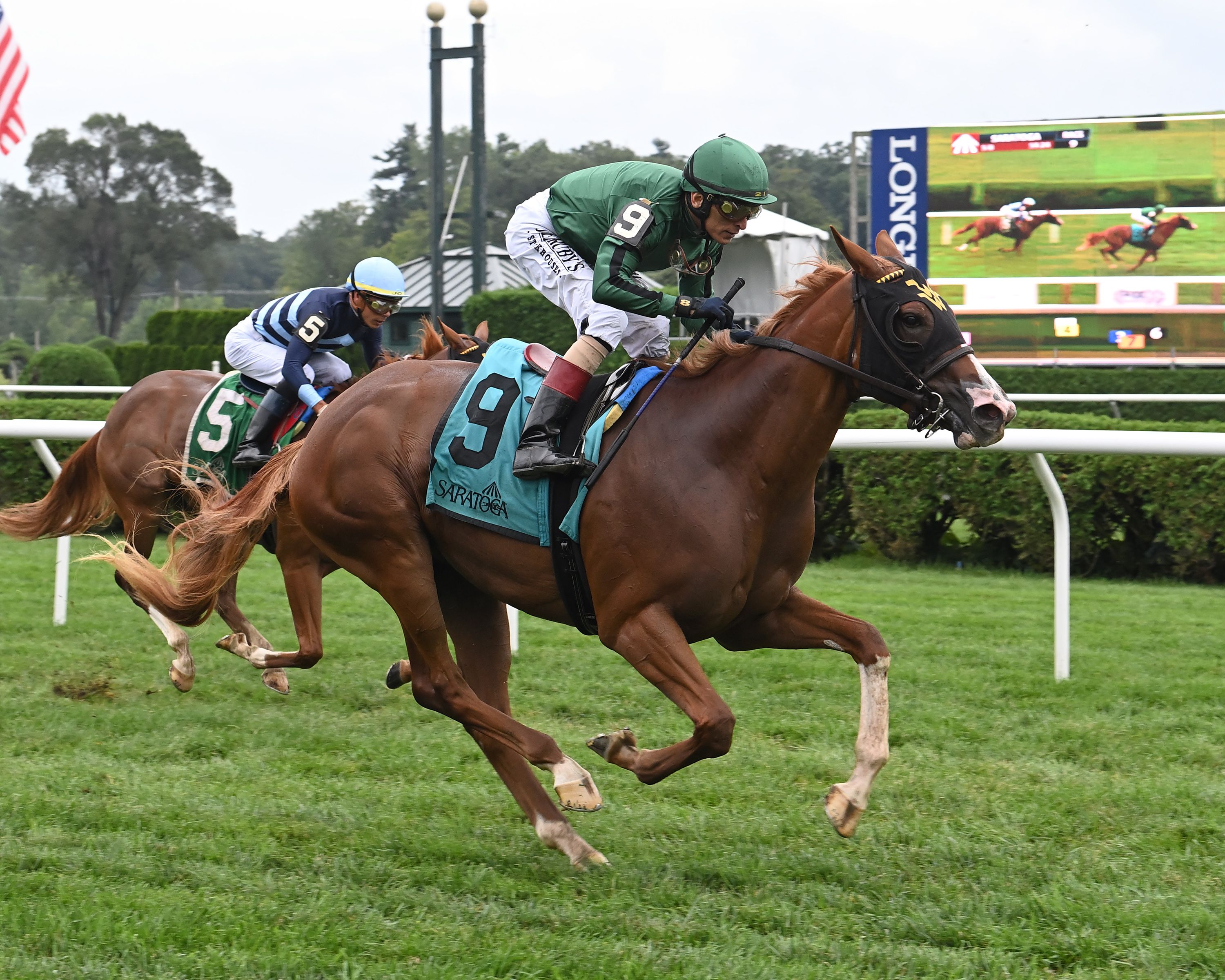 Johnny V gets his Irish up

Jockey John Velazquez has certainly shown a fondness for the Irish at the current Saratoga meet and why not? His wife, Leona, is the daughter of Leo O'Brien. So, it made perfect sense that the Hall of Fame rider, not currently having a standout meet, would rack up another stakes win for an Irish interest. This time it was last Wednesday's Bolton Landing Stakes on the grass for 2-year-old fillies and the partner was Chi Town Lady, running in the silks of Shane Ryan's Castleton Lyons outfit.

Chi Town Lady, trained by Wesley Ward, had broken her maiden at first asking in April at Keeneland but had not returned to the races since then. The filly stumbled leaving the gate in the Bolton Landing but Velazquez soon hustled her into contention and she was always prominent, taking the lead in the final sixteenth of a mile and going on to win by almost two lengths. She returned $12.80 to win.

“We broke horrible out of the gate, so that was the first thing, and the soft turf, she was having a hard time getting a hold of it for the first quarter of a mile,” Velazquez said. “By the time I got to the three-eighths pole, she got comfortable and it felt like she was going well and I was confident she would get there.”

Going Global atoned for her second-place finish in last month’s San Clemente at Del Mar by posting a convincing victory in the Del Mar Oaks in San Diego on Saturday. The 3-year-old Irish-bred filly took this Grade 1 grass race by a length with Flavien Prat in the saddle.

Going Global raced in midpack in the early stages of this tour of the Del Mar turf course, made a race of it around the far turn and proved dominant down the lane. She paid $4.80 as the heavy favorite. Since leaving Mick Halford’s yard in November, the filly has won five of six races in California. Nicky Hartery is her breeder. She is owned by a large partnership and trained by Philip D’Amato.

Jessica Harrington sent Soaring Sky over from Ireland for the Del Mar Oaks but the filly beat only one rival, checking in eighth. Javanica, trained by Eoin Harty, led from the starting gate to the stretch but backed up to sixth place passing the wire.

Three-year-old fillies trained by Andrew McKeever and Brendan Walsh comprised the exacta in the Lady Erie Stakes at Presque Isle Downs last Monday. McKeever sent Neil Jones’ Bullseye Beauty out with James Graham, who brought the homebred in with a two-length advantage. Both she and the Walsh-trained Risky Reward had been racing in midpack, although the favored Bullseye Beauty got the jump on the 18-1 Risky Reward and pulled away. The winner is now 3-for-6 lifetime. She paid $7.20 to win and topped a $97.60 exacta.

On the same card, John Fennessy maintained a suddenly hot hand, bookending the program with winners. In the opener, he saddled Ed Sexton’s Bad Pay to a maiden-breaking score in her 22nd career start. Huber Villa-Gomez had to work to keep in her front as her lead diminished approaching the wire, but she was a half-length the best there. She paid $4.40 to win. Sexton, a County Kildare native, previously managed the Steinbrenner family’s Kinsman Stud in Florida.

Later Monday, Fennessy got half a loaf in the nightcap when Clair Walker’s Secret Temple, a 9-year-old mare, dead heated for the win with Annie Up Buck. The latter had a clear lead straightening for home but Alexis Valdes got Secret Temple to the finish line on time to share the glory. The 18-1 Secret Temple returned $18.20 to win in this nickel claiming route.

Fennessy, who only won his first race of 2021 the previous week, cracked with a first-time starter in Tuesday’s finale. Audrina’s City, owned by Walker, rallied under Villa-Gomez to score by one length and ring up a $42.00 win mutuel.

Lynch and Marquez had the final say in the nightcap when the trainer's own Unrequited Love took the lead entering the far turn and reported home in front by two and one-half lengths in a claiming sprint at the $10,000 rung for non-winners of two lifetime races. The 3-year-old filly paid $3.20 to win and went home with trainer Rodolfo Sanchez-Solomon, who claimed her.

Baba, the 3-year-old filly that Michelle Nevin sent out in Saratoga’s fifth race on Sunday, has been a popular commodity at the claim box this year. In fact, Nevin spent $30,000 on behalf of Barry Ostrager to halter her in June. She got around to returning her to the races on Sunday and was rewarded with a four-length victory in a main track sprint. The win, Nevin’s first of the Saratoga meet, yielded a $13.20 win mutuel. Ricardo Santana, Jr. had the mount. Moments after Baba had done her job, she had a new home. Michelle Giangiulio sprung for the $25,000 claiming tag and now has her in her barn.