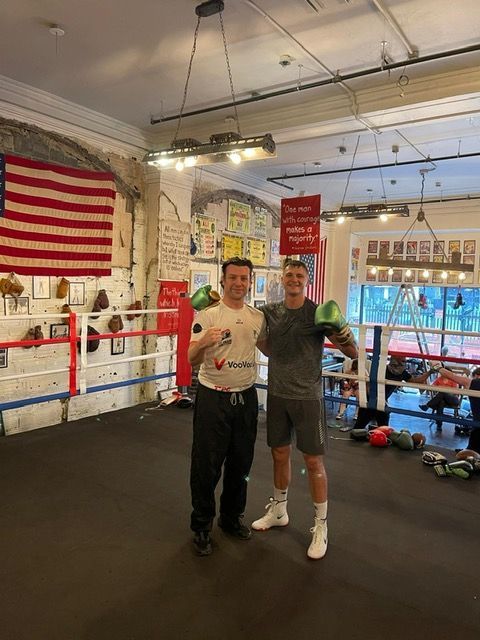 Connor “The Kid” Coyle and John Duddy, Derry’s two world-class middleweights of recent times, caught up in New York City last week for a workout and to discuss the ins and outs of prizefighting.

“It was great to spend time with John,” said Coyle, who is 18-0 with 8 KOs. “He’s an inspiration to many fighters including myself. He always gave fans their money’s worth and fought with incredible determination. That helped him become a big draw in New York and back home in Ireland. Above all that, he’s a true gentleman and a great ambassador for Irish boxing.”

Like Duddy, Coyle has a fan-friendly style. Fighting out of Florida, he had a big 2022, going 4-0 and winning the NABA title in the process.

Meanwhile, Coyle’s trainer Jim McLoughlin told the Derry Journal that he's determined to guide his Irish charge to a world title shot after their elevation to #6 on the WBA rankings last week.

McLoughlin, who has been training Coyle for the past six years out of his base in St. Petersburg, Florida, said that big fights are on the horizon for Coyle, who is “desperate” to become Derry's first world champion.

The former trainer of two-time world light middleweight titlist Ronald “Winky” Wright believes 2023 will be Connor's year and has several proverbial irons in the fire with some of the world's top promoters, including Eddie Hearn's Matchroom and Bob Arum's Top Rank.

McLoughlin revealed that talks were ongoing for Coyle to feature on the undercard of Katie Taylor's Irish homecoming show, expected to be hosted in front of 80,000 at Croke Park under the Matchroom banner next summer.

Also in the middleweight division, Donegal’s Jason Quigley is vowing to fight on 14 months after his loss to WBO middleweight champion Demetrius Andrade in New Hampshire.

According to irishboxing.com, the 31-year-old is eyeing a fight on the Katie Taylor – Amanda Serrano II undercard, if the rematch comes to Ireland in May.

“One hundred percent I’ll be back in the ring this year,” Quigley told Kevin Byrne on The Rocky Road podcast. “We’ve the head down and we’re working away and we’re going to get a date hopefully very soon. It would be good to get a fight now before Croke Park, if it comes off. The show’s not over — there’s another chapter or two left.”