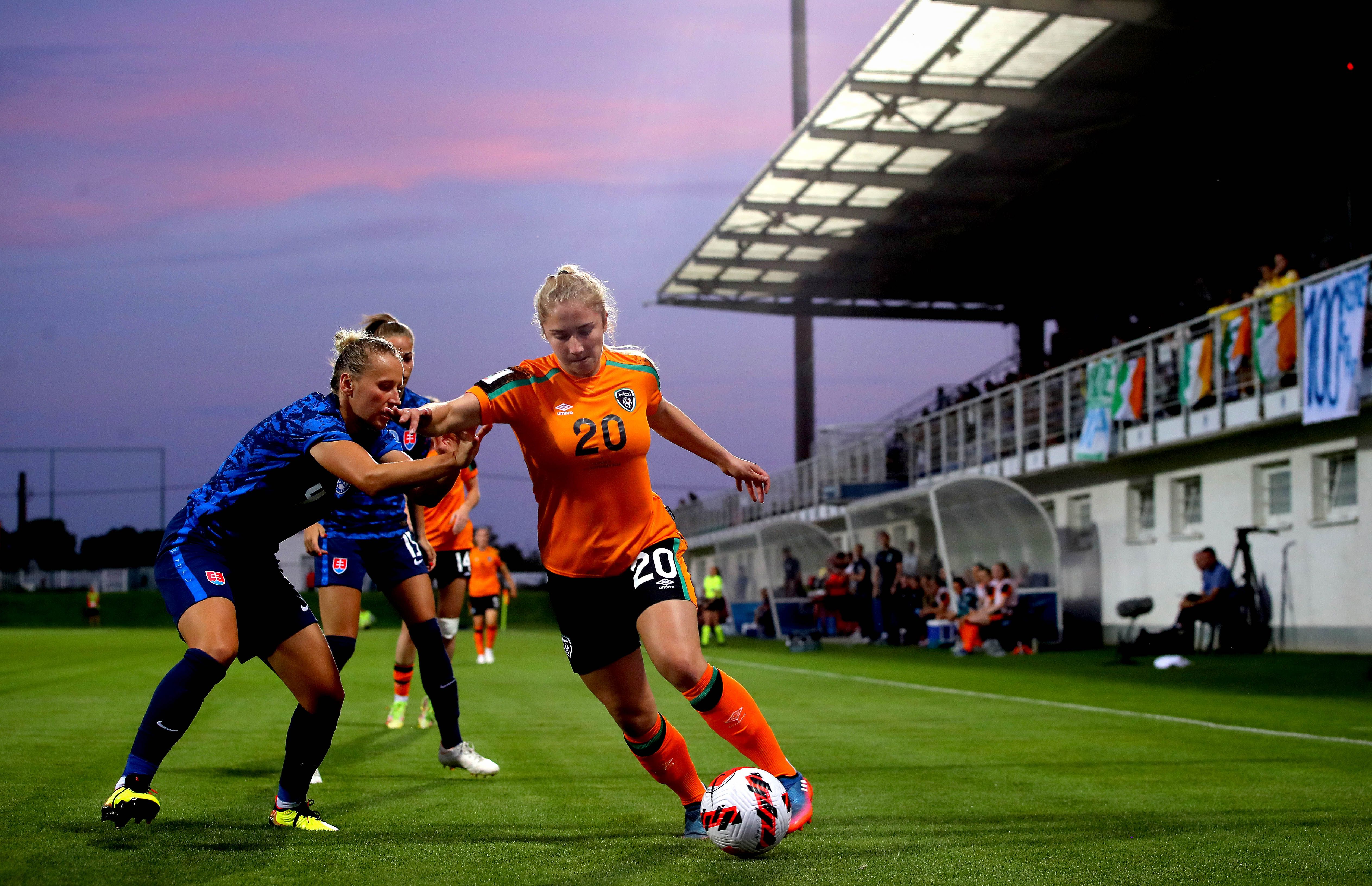 The Republic of Ireland women‘s team will meet either Scotland or Austria in their World Cup play-off. Scotland are home to Austria on Oct. 6 and the winners are then home to Vera Pauw’s team on Oct. 11. It will be the first time that Ireland will play either country since Pauw was appointed manager in Sept 2019. Ireland’s last game against Scotland came in a 1-0 friendly defeat in 2017, while we lost 2-0 in our last game against Austria in 2015. Austria finished second in their group behind European champions England, while Scotland were runners-up to Spain. However, even a win next month won’t guarantee Ireland a place in next year’s World Cup finals.As a result of the convoluted nature of the play-off system, Ireland may still have to travel to New Zealand next February to play in a 10-team intercontinental tournament with qualification on the line. The Irish team secured second place to Sweden in their group with 1-0 wins over Finland in Tallaght Stadium and Slovakia in Senec in recent weeks.

Due to the death of Queen Elizabeth II there were no soccer games played in Britain last weekend. it looks like there won’t be a full programme of games in the EPL and lower leagues next weekend as the Queen’s state funeral is due to take place on Monday next Sept. 19. Some games could be affected by a lack of resources such as policing. Games in London are under threat because of safety concerns, with police officers likely to be redeployed at short notice to help manage the state funeral

Chelsea’s ruthless reputation for sacking managers, irrespective of previous success and reputation, lives on with the dismissal last week of manager Thomas Tuchel 24 hours after their 1-0 defeat away to Dinamo Zagreb in the Champions League. It was Todd Boehy’s 100th day as owner of the London club and the decision came one day after Tuchel’s 100th game in charge of the Pensioners. If anyone believed  that Todd Boehly would adopt a lighter and more sympathetic touch to those inhabiting the manager’s office at Stamford Bridge than predecessor Roman Abramovich can think again. The same rules apply, poor results equal the sack. Boehly didn’t waste any time getting rid of the man who won the Champions League in May 2021, six months after arriving to replace the sacked Frank Lampard. The American’s hands-on approach, coupled with the lack of a sporting director after key figures such as director Marina Granovskaia and technical and performance advisor Petr Cech left, has made Stamford Bridge appear to  be an unsettled and somewhat chaotic place right now.

Graham Potter has left Brighton to take over as Chelsea head coach on a five-year deal. He had taken the Seagulls into the top four of the EPL this season. The compensation that will have to paid to Tuchel and Brighton for taking their manager will cost Chelsea over £20m, with Potter’s release clause thought to be set at £15m and Tuchel in line to receive £7m in compensation. It comes less than a week after closure of the transfer window, during which the club’s new owners spent almost £300m. At the weekend Potter wrote an open letter to Brighton fans asking them to forgive him for walking out on the club. He said his three years at the club changed his life and he hoped that the fans will understand that at this stage of his career, he felt he had to grasp a new opportunity.

Liverpool continue to struggle and they lost 4-1 away to Napoli last week in their first game in the Champions League. After a few poor results in the EPL and now in Europe manager Jurgen Klopp realizes that there are problems with his team. He said: ‘‘You don’t think a lot after the game, you react more. We have to kind of reinvent ourselves because basic things were not there. It’s a difficult period, no doubt about that. If you are not playing exceptionally well, you still can defend on a really high level. We should be able to do that.’’

Liverpool were due to play Ajax in the Champions League at  Anfield on Tuesday night as the Echo went to press. But no stopping Manchester City, who travelled to Spain and beat Sevilla 4-0 last week.  City are home to Borussia Dortmund tonight (Wed). Spurs beat Marseille 2-0 at Tottenham Hotspur Stadium and they are in Portugal this evening to play Sporting CP. Chelsea, who lost 1-0 away to Dinamo Zagreb are home to Salzburg to-night. Celtic were beaten 3-0 at Parkhead by Real Madrid and the Bhoys are away to Shakhstar Donetsk to night. Rangers, who went down 4-0 away to Ajax last week, will play Napoli at Ibrox to night. No away fans will be allowed at tonight’s game or for Napoli’s home game against Rangers on Oct 26.

In the first round of the Europa League Manchester United were beaten 1-0 at Old Trafford by Real Sociedad. United are away FC  Sheriff  in the second round tomorrow night. Arsenal won 2-1 away to Zurich last week and the Gunners are home to Ludogorets Razgrad tomorrow (Thurs) night. The Bulgarian club knocked Shamrock Rovers out of the Champions League qualifiers.

Norwich City strike Adam Idah’s injury nightmare continues and he has been ruled out of the Nations League games against Scotland and Armenia later this month. The Cork native had only recently made his comeback after a lengthy lay off with injury, making two sub appearances for the Canaries last month, including a goal in their League Cup defeat to Bournemouth. But Idah’s knee flared up again in recent weeks and Norwich manager Dean Smith has confirmed that the player will miss the international window. Smith said: ‘‘Adam’s  knee is still swelling up. He had to have some exploratory surgery, that will put him out for a number of weeks.’’

Barcelona last week agreed a world-record fee with Manchester City for England midfielder Keira Walsh. The 25-year-old, one of the stars of the Lionesses’ Euros success over the summer, has been with City since 2014 and has a year left on her contract. It is understood that after previous bids from Barca for Walsh were rejected by City, a fee reportedly around £350,000, was agreed between the clubs, ahead of a Spanish transfer deadline, that sees her become the world’s most expensive female footballer. Two years ago, Denmark star Pernille Harder joined Chelsea from Wolfsburg for what was reported to be a world-record fee in excess of £250,000. Walsh, who won the 2016 WSL title, three FA Cups and four League Cups with City, earned her 50th England cap in last week 10-0 win over Luxembourg in Stoke.

Former Manchester United and Wales star Ryan Giggs says he is ‘disappointed’ that will have face a retrial in July next year on charges of assault and coercive and controlling behaviour towards a former girlfriend. It comes after a jury was discharged two week ago when it failed to reach a verdict at Giggs first trial despite 23  hours of deliberations.

Shamrock Rovers started their Conference League group stage campaign with a 0-0 draw with Swedish club Djurgardens in Tallaght Stadium last Thursday. Club captain Ronan Finn, who set a new League of Ireland record when making his 55th European appearance, said he was encouraged by the result. Finn said: ‘‘I think it's going to be a very competitive group. It could be a low points tally that qualifies. For us we just need to make sure that we capitalize when we get the chances, that’s probably the only bit of criticism we would have from our end. It’s great for the league and is probably the one time of the year that everyone tunes in throughout the country and we want to put on a good show.’’

Rovers lost their second game in the Conference League 3-0 away to Belgian club Gent last night.

Meanwhile in the League of Ireland Premier Division Rovers stretched their lead over Derry City at the top of the table to 4 points after a comfortable 5-1 win over Finn Harps in Tallaght on Sunday evening. Derry, who have played a game more than Rovers, beat Bohemians 1-0 at the Brandywell on Friday thanks to a brilliant goal from Michael Duffy. Dundalk suffered a shock 3-2 defeat to UCD at Belfield on Friday night, but they hold on to third place for now after they were awarded a 3-0 over Sligo Rovers. When Sligo played Dundalk at the Showgrounds at the end of August, Sligo won the game 2-0, but then it was discovered that Sligo had fielded Adam McDonnell when the player was suspended. An independent Disciplinary Committee determined that the midfielder played while suspended. The committee ruled that Sligo Rovers should forfeit the fixture by a scoreline of 3-0. Sligo are expected to appeal the decision. That means that Dundalk are on 53 points, two points ahead of  4th placed St Patrick’s Athletic, who won 2-0 away to Drogheda.