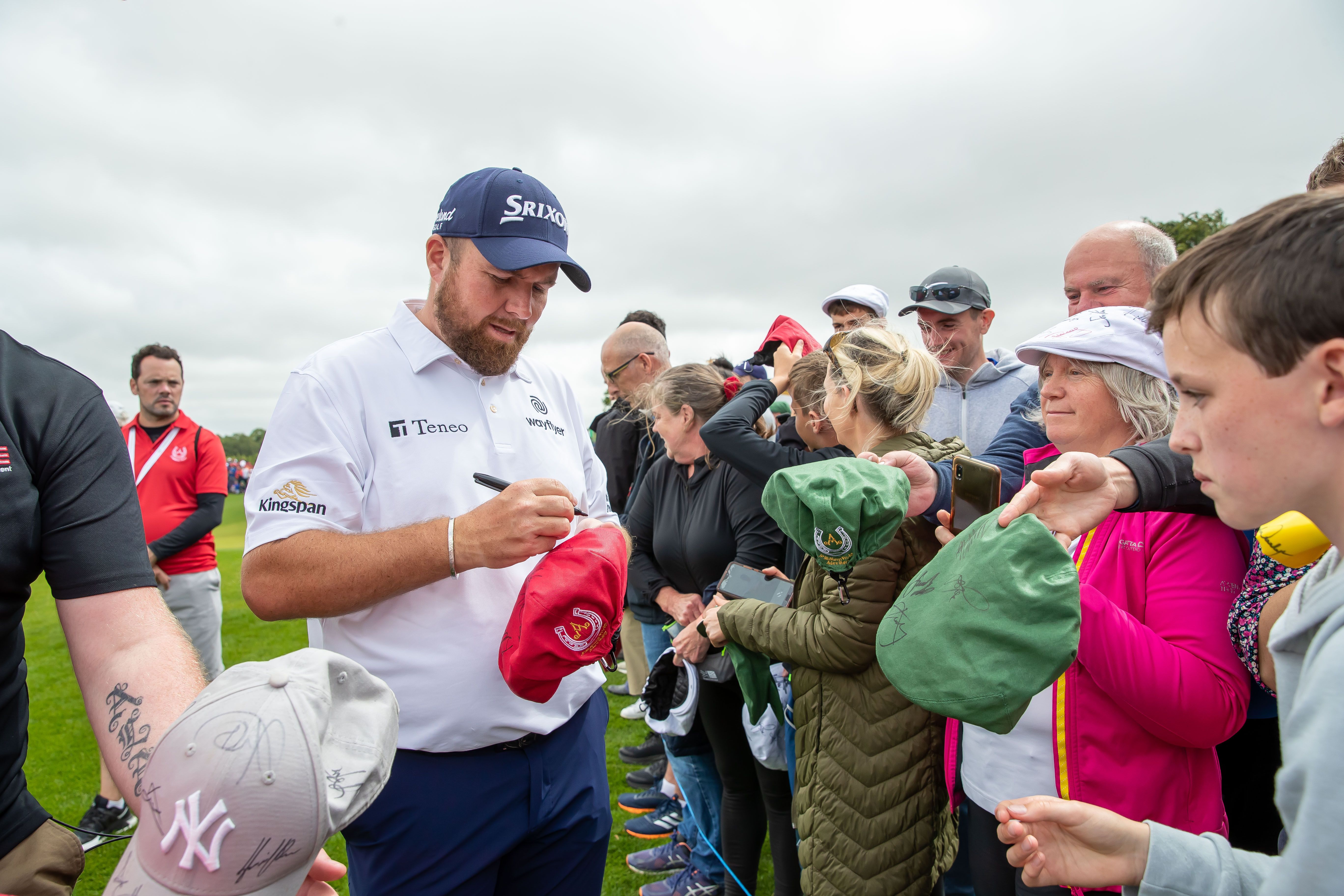 Shane Lowry broke a three-year drought in winning the BMW PGA Championship at Wentworth, which scuttled its Friday round amidst a national day of mourning for Queen Elizabeth II, thus shortening the tournament to 54 holes. This worked to Lowry’s advantage, as he wouldn’t have to contend with either Jon Rahm or Rory McIlroy over another 18 holes.
Lowry put himself into contention with rounds of 66 and 68, finishing with 65 for the win. Conspicuous by its absence from his scorecards were any bogeys. He had his moments of brilliance on Sunday – there was an approach shot at the par-5 fourth hole that fell 10 feet from the hole. He converted the eagle putt. At 12, he blasted out of sand to within inches of the cup, leading to a tap-in birdie.
At that point, Lowry had tied Rahm for the lead. The Spaniard was in the clubhouse at the time, having singed the course with a round of 62. With four birdies and an eagle through the first 12 holes, certainly a single birdie to take command would come soon enough from Lowry. But after several near misses on birdie putts and some wayward drives, Lowry was faced with having to make birdie at 18 for the win.
An excellent approach shot from the fairway to the green on the par-5 finisher landed 19 feet from the pin, requiring Lowry to knock the ball in with two whacks for the win or three for a playoff. His first putt stopped 10 inches short of the cup and he finished matters off right away for his first victory since the 2019 British Open.
Actually, his victory wasn’t quite official at that point. There was still the matter of McIlroy playing in the group behind Lowry’s. Lowry had begun the third and final round a stroke behind McIlroy. But the latter had a quiet front nine, trimming only a stroke off par. He heated up on the back nine, however, with four birdies.
The last of those birdies was looking all the world like an eagle as it rolled its way toward the pin on 18, coming up just one revolution short of dropping in. An eagle would have meant a Lowry/McIlroy playoff, but birdie merely entitled McIlroy to share runner-up honors with Rahm.
“I’m just very thankful and very grateful that I got to win this and what a tournament to win as well,” Lowry said. “Seems like I don’t like to do it small when I do it, so it’s nice to have this on my resume as well.
“I am so happy; it’s so hard to win on this tour, any tour. You have some of the best players in the world trying to chase you down, and I thought about it today, but I felt like my game has been good enough all year to win, and I just felt like I haven’t had the breaks that I needed to win tournaments.”
As for McIlroy, the disappointment at not winning was softened by the fact that Lowry did.
“Really happy for him,” McIlroy said. “He’s had a lot of close calls here. Finished second to me when I won in 2014 and he’s got me back today. He’s been knocking on the door for a while. He’s played a lot of good golf this year without actually getting over the line. So, really, really happy for him. We’ve become incredibly close over the last couple years.”
Graeme McDowell posted rounds of 71, 69 and 69 to finish seven strokes under par and 10 behind Lowry for a share of 50th place. Rounds of 75 and 68 saw Jon Caldwell miss the cut by four strokes.

PGA TOUR CHAMPIONS
Padraig Harrington won his third event on this circuit this summer, a circumstance that is becoming almost ho-hum. Almost that is, except for the fact that he seems to try his best to accommodate the rest of the field. He held on to win by a stroke over a surging Y.E. Yang.
An opening-round 65 at Norwood Hills was devoid of bogeys. He kept that up over the front nine on Saturday, going out in 32. But three bogeys crept onto his card, resulting in a round of 66.
Two birdies to begin Sunday’s round were erased by a double-bogey 5 at the fourth hole. But he got those back and then some by the time he made the turn in 33.
The back nine had its moments. Harrington drove the green on the par-4 11th hole, resulting in a birdie that extended his lead to three strokes. He gave that back, however, when his approach shot at 13 sailed over the portable stands behind the green. Rather than seek relief, he lofted the ball over the stands onto the green, where he cleared off with bogey.
A clutch par putt at 17 enabled Harrington to tee off at 18 with a two-stroke lead over Yang, who had played in the group ahead of his. After knocking his approach shot into a greenside bunker, Harrington got up and down in two for bogey and 68, just enough to claim the trophy.
Harrington admitted that playing the frontrunner is not a role that squares with his comfort zone.
“I’ve always had the ability to win when I was coming from behind but, obviously, here I’m in front and have to manage that and manage my emotions,” Harrington said. “Getting to the clubhouse, maybe I was looking at the victor’s speech a bit too much.”
Darren Clarke was in with a slight chance at the beginning of the final round, having begun with rounds of 68 and 67. But Sunday’s 73 saw him drift down into a share of 24th place, nine shots behind Harrington.
Next up is the Sanford International in Sioux Falls, S.D. Clarke is the defending champion and Harrington is signed up to challenge.

EUROPRO TOUR
Torrential weather, not the Queen’s passing, caused the event at Spey Valley in Scotland to be shortened to 36 holes from 54. That worked to the advantage of Stuart Grehan and Dermot McElroy, who were tied with Scotland’s Michael Stewart for the lead after two rounds. A playoff was then utilized to determine a victor.
Stewart was the first to drop after three extra holes. Grehan and McElroy then matched pars over the fourth and fifth holes, as well as birdies on the sixth. The seventh hole proved to be decisive for Grehan as his birdie pipped McElroy’s par.
The result solidified McElroy’s position in second place on the Tour’s Order of Merit. With three events remaining on the calendar, he seems likely to finish among the Tour’s top 5 and ascend to the Challenge Tour for 2023. As for Grehan, who plays out of Tullamore Golf Club in County Offaly, his victory boosted him to ninth place, well within reach of the top 5.

LPGA TOUR
Leona Maguire tied for 24th place in the Kroger Queen City Championship in Cincinnati. She posted rounds of 70, 67, 73 and 72 to finish six strokes under par and 16 off Ally Ewing’s winning score.
Stephanie Meadow tied for 63rd place after rounds of 71, 71, 69 and 78. She was only a stroke over par when she made the turn in her final round on Sunday but then proceeded to lose five more strokes over the back nine.
Maguire will play this week’s Portland Classic in Oregon; Meadow is taking a pass.

KORN FERRY TOUR Q-SCHOOL
Jack Madden was one of 30 golfers to advance through a prequalifier at Quarry Oaks in Ashland, Neb. Madden, who is entering his senior year at Arkansas State, shot rounds of 73, 65 and 70 for an aggregate 208, which was five strokes under par for 54 holes, five strokes off the low number and six above the score needed to advance to first stage. His second-round score was low for the tournament. He hails from Dungannon, Co. Tyrone.