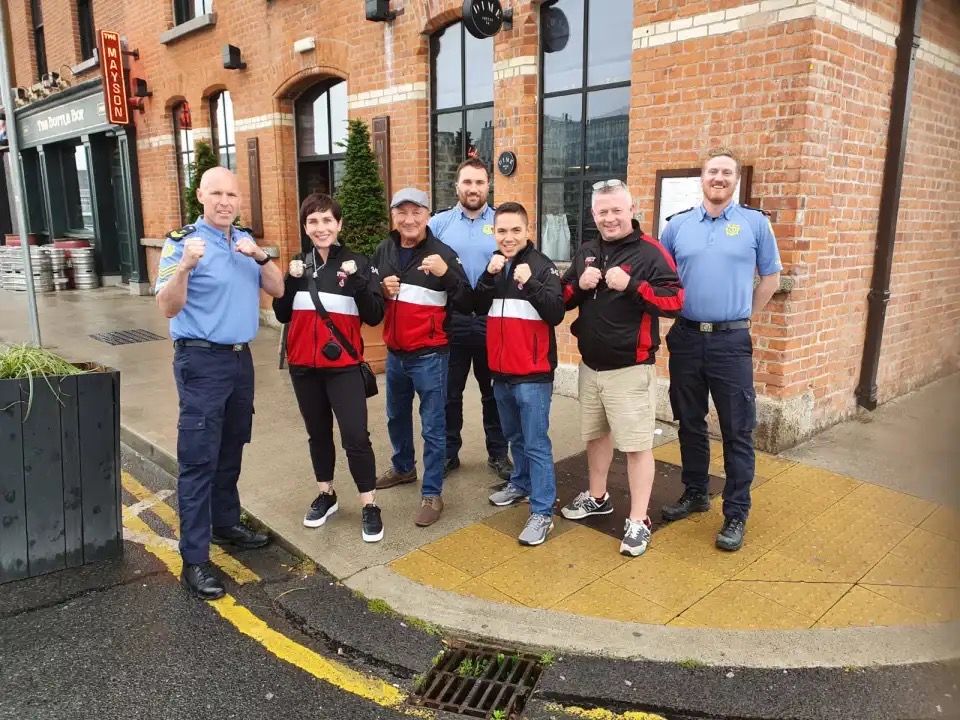 Some of the traveling FDNY contingent pictured in Dublin.

“Incredibly exciting,” is how Maguire, FDNY’s club president who has Roscommon roots, summed up the event. “A great crowd was in attendance, and it was one of the most memorable battles between these two clubs which have faced each other annually over the past decade. The seven bouts between the two teams were each evenly contested with the winner in most bouts doubtful until the final decision was awarded.”

One of the closest contests – and an upset of sorts – was light heavyweight James Gennari’s loss to Jack McHugh, who’s 21 and out of Oranmore, Co. Galway. “Most of the crowd thought it should have gone the other way,” said Maguire.

Arguably the FDNY’s best fighter, Gennari, was a bronze medalist at the recent World Police and Fire Games in Holland.

Kevin Guzman, another light heavyweight, and super featherweight Matt Blewitt were the other FDNY pugilists that came up short. Guzman dropped a close 3-2 decision to the Garda’s Eoin O’Connor, while Blewitt succumbed by the same narrow margin to Mayo native Finbar Thompson.

Veteran middleweight Jeffery Barreau defeated the Garda’s Foad Baghban in an exciting three-rounder, while Javier Rosario recorded the only stoppage of the night with a first round TKO of the hometown’s Senan Morris in a light heavyweight scrap.

In a quick turnaround for a world ranked fighter, Connor “The Kid” Coyle returns to action– exactly three weeks after his latest victory – for the biggest bout of his career.  In a clash between two undefeated middleweight contenders, Coyle, who’s ranked #10 by the World Boxing Association (WBA) battles the WBO’s #4 challenger Felix Cash on Oct. 8 at the sold-out O2 Arena in London.

The scheduled 10 rounder will be for the WBA Intercontinental title. It will also be the co-feature to the grudge match between Chris Eubank Jr. and Conor Benn on a card to be broadcast live in the U.S. by DAZN.

Coyle [17-0, 7 KOs] is coming off an eight-round unanimous points win over Mexican veteran Silverio Ortiz [37-32, 18 KOs] in Tampa, Florida on Sept. 17. The Derryman, who trains out of Pinellas Park, Fl., is the North American Boxing Association [NABA] middleweight titlist.

Cash, meanwhile, is 15-0 [10 KOs] after his last fight, a 10-round decision over the previously unbeaten Magomed Madiev on Feb. 12. Cash, who’s 29 and fights out of Berkshire, England, also inflicted the first loss on then undefeated Denzel Bentley via third round stoppage, and Jack Cullen, who Cash stopped in the eighth stanza.

“I’m excited about this fight because the winner could be fighting for a world title in the near future,” Coyle said of the Cash scrap. “It’s going to be a great night of boxing and there’s going to be a huge crowd at the O2 Arena plus all the fans watching around the world on DAZN. This fight is also close to home (Northern Ireland) for me so my fans and friends will have the opportunity to see me in the most important fight of my career.”

Coyle’s promoter, Jody Caliguire of Fire Fist Boxing Promotions, sees the Cash fight as a perfect opportunity for his charge to become recognized as a top middleweight.

“This fight is going to steal the show,” said Caliguire. “This is a huge platform for both Connor and Felix. Both fighters have undefeated records and are highly ranked but are looking for that signature victory to get their name into the world title picture. Connor’s worked incredibly hard and made many sacrifices for his boxing career. I’m confident that everybody will know who he is after October 8."

Born and raised in Brooklyn, Hardy (22-2, 4 KOs) won  the WBO featherweight title with a unanimous decision over Shelly Vincent in Oct. 2018. She lost it to  Amanda Serrano in Sept. 2019.  The Irish-American is currently ranked #12 in the lightweight division by the Women's International Boxing Association.

Out of Santiago de Tolu, Colombia, Silgado (20-15, 15 KOs) is an eight-time world title challenger. She made her professional debut in 2012.

Tickets, priced from $85 for general admission are available at Ticketmaster. General Admission tables and VIP tables are also available.  Doors Open at 6 pm and the first bell is at 7:30 p.m.