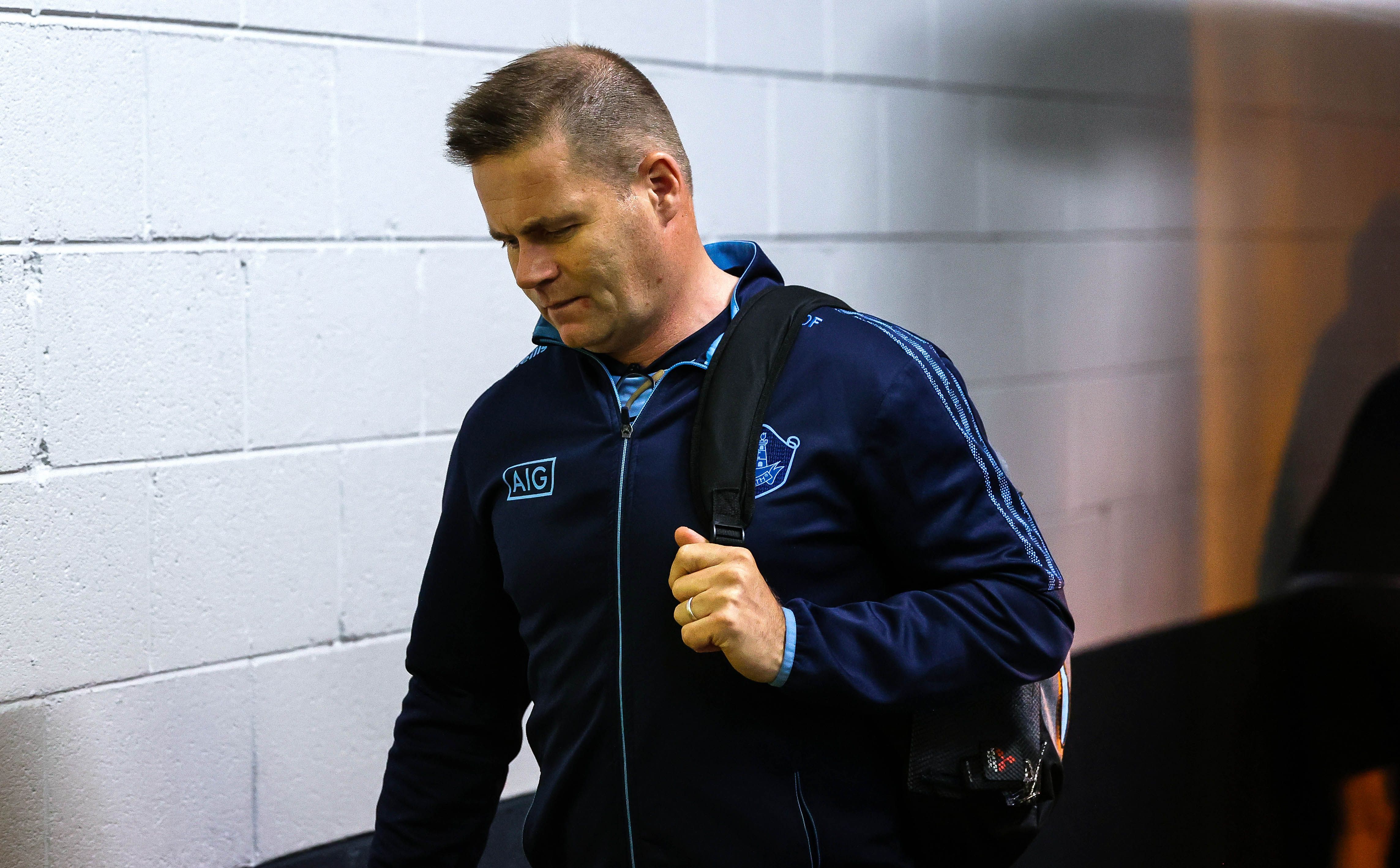 Dublin stars back Farrell as boss

Dublin midfielder James McCarthy says his Dublin team-mates are delighted that Dessie Farrell is staying on as manager. Farrell  recently ended  speculation about his future by committing to another two years in the Dublin dug out. There were ‘mad’ rumours going around that Declan Darcy was going to replace Farrell and that Stephen Cluxton and Jason Sherlock were going to be part of Darcy’s backroom team. But that’s all they were, rumours. McCarthy said: ‘‘From a player group, we have full faith in Dessie. There is always going to be talk out there when you are not successful. Two seasons in-a-row, two semi-final defeats, that’s the bottom line. So from our point of view, we are thinking ahead and trying to give a good go in 2023.  Dessie is a great manager and a great coach and he knows the players so well. He has managed so many of us at underage level.. We definitely think he is the man to try take us back to the All-Ireland final next year.’’ The long-serving McCarthy, son of seventies star John McCarthy, also confirmed his intention to line out for the Dubs again in 2023, saying he has ‘unfinished business’ to tend  to.

The FAI Cup competition is down the last eight and none of the minnows have made it to the quarter-finals stage. I think the surprise team this year could be Waterford, who have recently been acquired by new English owners. The Blues, who knocked out the 2021 winners St Patrick’s Athletic in the first round, then had a big 6-0 win over non-League Malahide United in the second round. They are home to Dundalk on Friday night and I think they could make it to the semi-finals. Elsewhere the Shelbourne vs Bohemians game at Tolka Park has got a Sunday afternoon kick-off due to the Garth Brooks concerts at nearby Croke Park this weekend. With Brooks due to play to full houses at Jones Road just across the Tolka River, the cup tie at the Richmond Road venue has now switched to Sunday at 2pm. Both teams are well matched and Shelbourne manager Damien Duff says he would love to win the Cup in his first season with Shels. Bohs have bounced back since sacking their manager Keith Long and I think they should win. On Friday night the big one is the meeting of Derry City and Shamrock Rovers at the Brandywell, while Treaty United and UCD meet at the Markets Field in Limerick.

Irish winger Jacob Stockdale has made a comeback after being out injured for over a year. The 26-year-old returned to full training with his province and scored a try on his return, a 31-22 pre-season win over Exeter Chiefs at Ravenhill. Stockdale last played in September 2021 and has been sidelined since due to an ankle injury. The  35-times-capped Ireland winger/fullback is now finally set to get back into the Irish squad. Competition for places in Ireland’s back three is very strong at the moment but there’s no doubt that national team head coach Andy Farrell will be tracking Stockdale’s progress with interest. Stockdale’s most recent Ireland cap came in August 2021 against Japan. Meanwhile, Ulster have confirmed that captain Iain Henderson and centre James Hume remain sidelined due to the respective hand and groin injuries they suffered during Ireland’s tour to New Zealand earlier this summer.

Two of the successful Meath ladies football management team have been confirmed as part of Colm O’Rourke’s men’s backroom team in Meath. Paul Garrigan and Eugene Eivers, both of whom were part of Eamonn Murray’s backroom team as they won back-to-back All-Irelands titles, were ratified by the Meath County Board last week. Former  Dublin goalkeeper Shane Supple, who also played for Ipswich Town and Bohemians, will be Meath’s goalkeeping coach. Eivers will work in the area of strength and conditioning while Garrigan will be one of O’Rourke’s primary coaches.

In Clare, Colm Collins will take charge of the Banner senior footballers for a 10th successive season in 2023. His reappointment at last week’s county board meeting makes him the longest-serving inter-county manager in either code following Brian Cody’s recently departure as Kilkenny hurling manager. The Kilmihil native led Clare to an All-Ireland quarter-final appearance this summer against Derry, having earlier retained their National League Division 2 status.

Galway-born Johnny Kelly is the new Offaly senior hurling manager, where he replaces Michael Fennelly. Kelly boasts an impressive CV at club level, having managed Portumna to All-Ireland glory in 2009, Coolderry to Offaly success in 2015 and Borris-Ileigh to Tipperary and Munster titles in 2019. He is a former Galway under 21 manager and is currently manager of Nenagh Éire Óg.

Brian Cody’s hiatus from hurling has proven to be a brief one, with the former Kilkenny manager returning to the club game as a selector with his own club James Stephens. The 68-year-old’s career as Kilkenny senior manager ended in July after 24 seasons with the All-Ireland final defeat to Limerick, but now his home club have succeeded in luring him back to the sidelines. The club, who are known as The Village, are managed by Seamus Dwyer, with former Laois manager John Sugrue part of the backroom team. Their current captain is Brian Cody’s son Diarmuid.

Former Tipperary star  Eoin Kelly is joining Davy Fitzgerald's backroom team in Wexford. Kelly played under Fitzgerald when both men were instrumental in bringing success to LIT in colleges hurling, including the 2005 Fitzgibbon Cup title. The Mullinahone man is widely regarded as one of the greatest forwards of all time and previously served as a Tipperary selector under Liam Sheedy. Also joining the new Déise senior set-up is former Waterford hurler Peter Queally, who was manager of Roanmore up to last week.

Kilkenny camogie manager Brian Dowling has expressed his frustration at his All-Ireland champions having to fundraise for their team holiday. While their male counterparts in hurling and football are known to receive around €80,000 from the GAA towards their holiday fund, there is no such grant available to the All-Ireland camogie finalists. Dowling said: ‘‘We are all aware that funds are tight everywhere and not every governing body supplies such grants, but at the same time, I wonder are people aware that the girls have to fully fund the trip themselves, that is if the trip is even affordable in the first place. Having a team holiday is not a priority for us, but when you see the contribution that is made towards the men’s teams, it's something we feel we would like to see change going forward for all teams that reach All-Ireland Camogie finals. You would be looking at having to raise at least €70,000 and that would be a conservative sum based on today’s prices. The girls last went on a team holiday in 2016 and they were out with buckets before senior hurling championship games trying to fundraise. It’s like the girls are having to beg.’’

Brian Dowling pictured with fans at the Kilkenny homecoming following their victory in the All Ireland camogie final. INPHO/EVAN TREACY

Former RTE commentator Brian Carthy has launched a new podcast series which rounds up the results from weekend GAA senior club championship games around the country. With the club championships now  in full flow the games are coming thick and fast for counties as part of the inaugural split-season system. The Roscommon-born broadcaster, who was part of the RTE radio team for over four decades, returned to the airwaves recently with his first results podcast. The series harks back to the time when late Radio Eireann broadcaster Seán Óg Ó Ceallacháin had his Sunday night radio programme Gaelic Sports Results, which was the longest running continuously broadcast radio feature in the world.