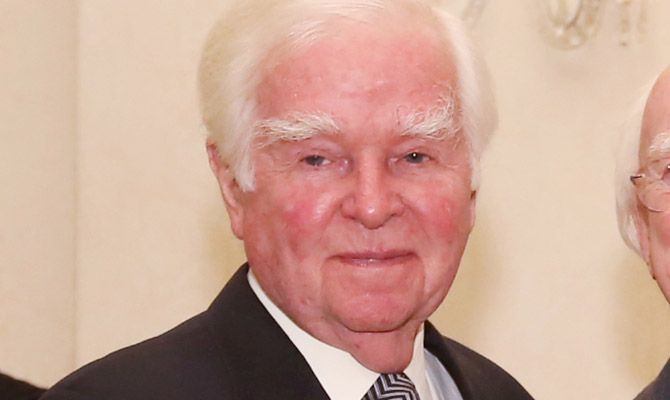 Dr. Kevin Cahill, for years the President General of the American Irish Historical Society on Fifth Avenue in Manhattan, has died. Dr. Cahill was 86

Dr. Cahill died Thursday at his Long Island home after a lifelong career in medicine and during which he became one of the most prominent physicians in the United States.

In late life, however, he became embroiled in controversy over the governance of the AIHS and at the time of his passing he was being sued by two former women patients who accused him of sexual assault. Both accusers were named in a New York Times report earlier this year. Dr. Cahill had denied the charges.

Dr. Cahill’s reputation as a physician was extensive and international. Among his patients over the years were Cardinal John O’Connor, Pope John Paul II and President Ronald Reagan. He specialized in internal medicine and tropical diseases.

But it was Dr. Cahill’s dominant role at the Historical Society that made his name a familiar one in Irish America, this even after his retirement from the post of President General, a position he had occupied through five decades.

In recent years the AIHS has been rocked by controversy centered on its governance, a controversy that has witnessed board members being fired and also resignations.

The proposed sale of the AIHS building - the original asking price of $52 million has been reduced to $44 million - has prompted angst and uproar in the New York City and broader Irish American community with a petition objecting to the sale of the premises having attracted over 40,000 signatures.

New York State Attorney General Letitia James has been conducting an investigation into the proposed sale of the Gilded Age mansion that is the AIHS headquarters.

The building at 991 Fifth Avenue was still being listed for sale today, Thursday, at the reduced $44 million asking price.