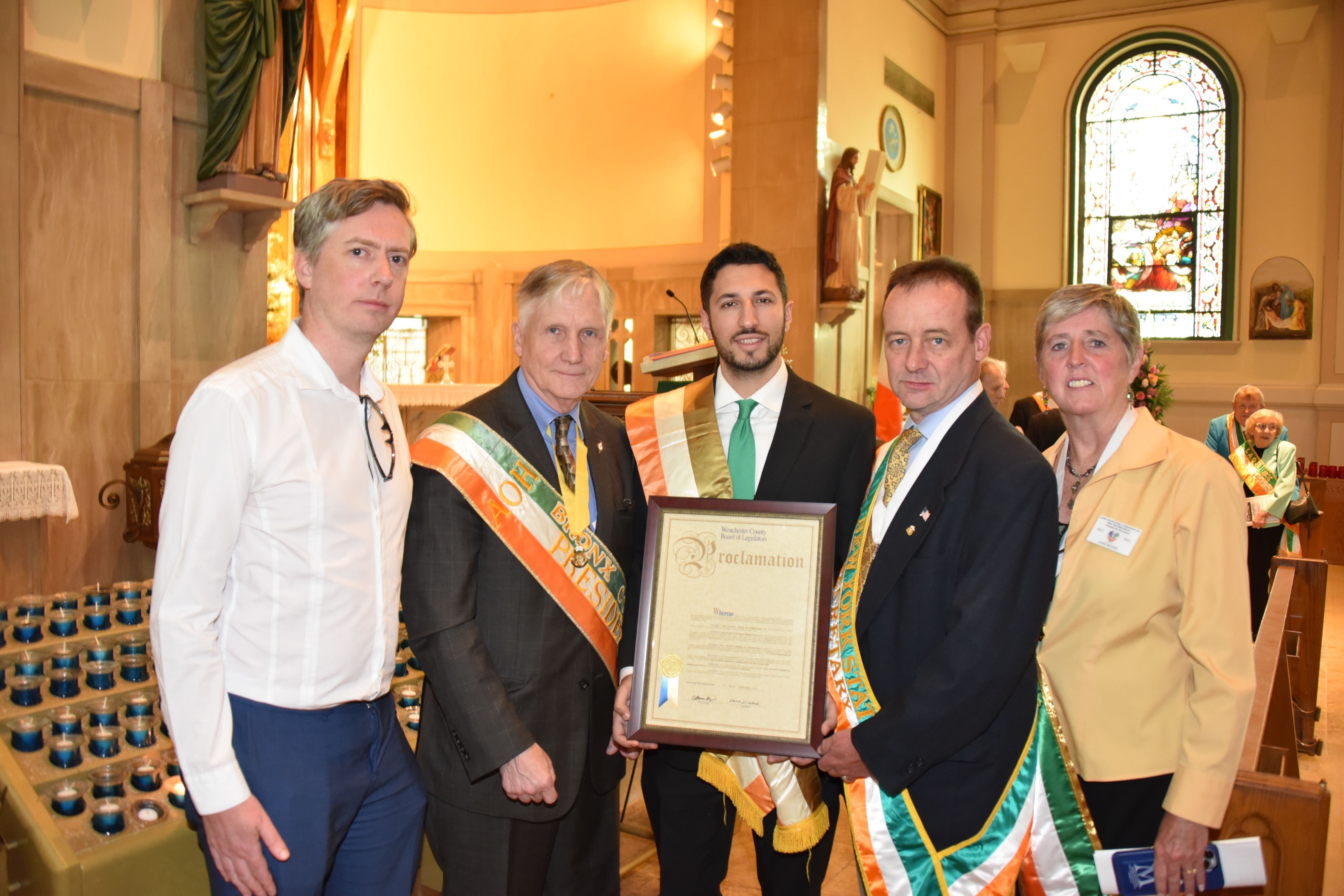 The Westchester County Legislature proclaimed “Gaelic Mass Day” as viewers from as far away as Texas, California and Ireland itself, joined Hibernians wearing sashes and medallions, Irish community groups, Irish speakers and parishioners, for a Mass said in Irish by Fr. Brendan Fitzgerald at St. Barnabas on Saturday, September 17.

Stated a release: "This year the Mass included special prayers for victims’ families 'who hunger and thirst for justice,' remembering families who have been fighting for justice for loved ones murdered during the Troubles, and now face planned British amnesty laws opposed by the Irish government, all Irish political parties and the Catholic Bishops."

Westchester County Legislator, David Tubiolo, announced that the county had officially declared “Gaelic Mass Day” bringing a proclamation which memorized the importance of the Irish Language, as well as the plight of those seeking truth and justice about victims of Ireland’s 1969-98 Troubles.

Also highlighted were the Irish Mass Rocks where outlawed Masses were said in secret by outlawed priests, this as a result of English Penal Laws in Ireland.

Booklets containing Irish-English translations of the prayers were handed out to those coming into St. Barnabas, or downloaded by viewers on facebook.

"These booklets allowed everyone to follow the prayers in English as they listened to the Irish words," said the release.

Readings in Irish were given by Irish Deputy Consul General Seán Ó hAodha and Mairead Greenan of the Emerald Isle Immigration Center.

In his sermon, Fr. Fitzgerald quoted Pope John Paul II, who said "there is no peace without justice, and no justice without truth." Fr. Fitzgerald said "truth is the foundation of justice and peace, and we must never lose our passion for truth in order to gain a perception of peace."

He cited the example of a boyhood hero Terence MacSwiney, the Lord Mayor of Cork who died on hunger strike during Ireland's fight for independence.

Fr. Fitzgerald said he wanted to “acknowledge the heroic sacrifice of our ancestors who gathered at Mass Rocks deep in the woods or forests, putting their lives on the line simply to hear Mass in their own language in defiance of Penal Laws."

Following the Mass, Martin Galvin, President of Bronx County AOH said: “Gaelic Mass Day has gone from a local Bronx AOH event to become a national event with AOH members across the country wanting to be a part of it.

"We are grateful to the parish, AOH and LAOH nationally, Irish government, local Irish community groups, Irish language clubs, and musicians who helped give this celebration of the Irish language the importance it now holds.

"The AOH exists to foster Irish traditions, ideals, culture and history. It is hard to imagine a ceremony that could embody everything the AOH stands for, better than Gaelic Mass Day.

"This year, as the British government moves to enact laws designed to close down hopes of justice for families of victims killed in controversial circumstances during the Troubles, it was fitting to remember those who still hunger and thirst for justice."