Home Opinion Adams: The Monarchy and a Tolerance of Differences 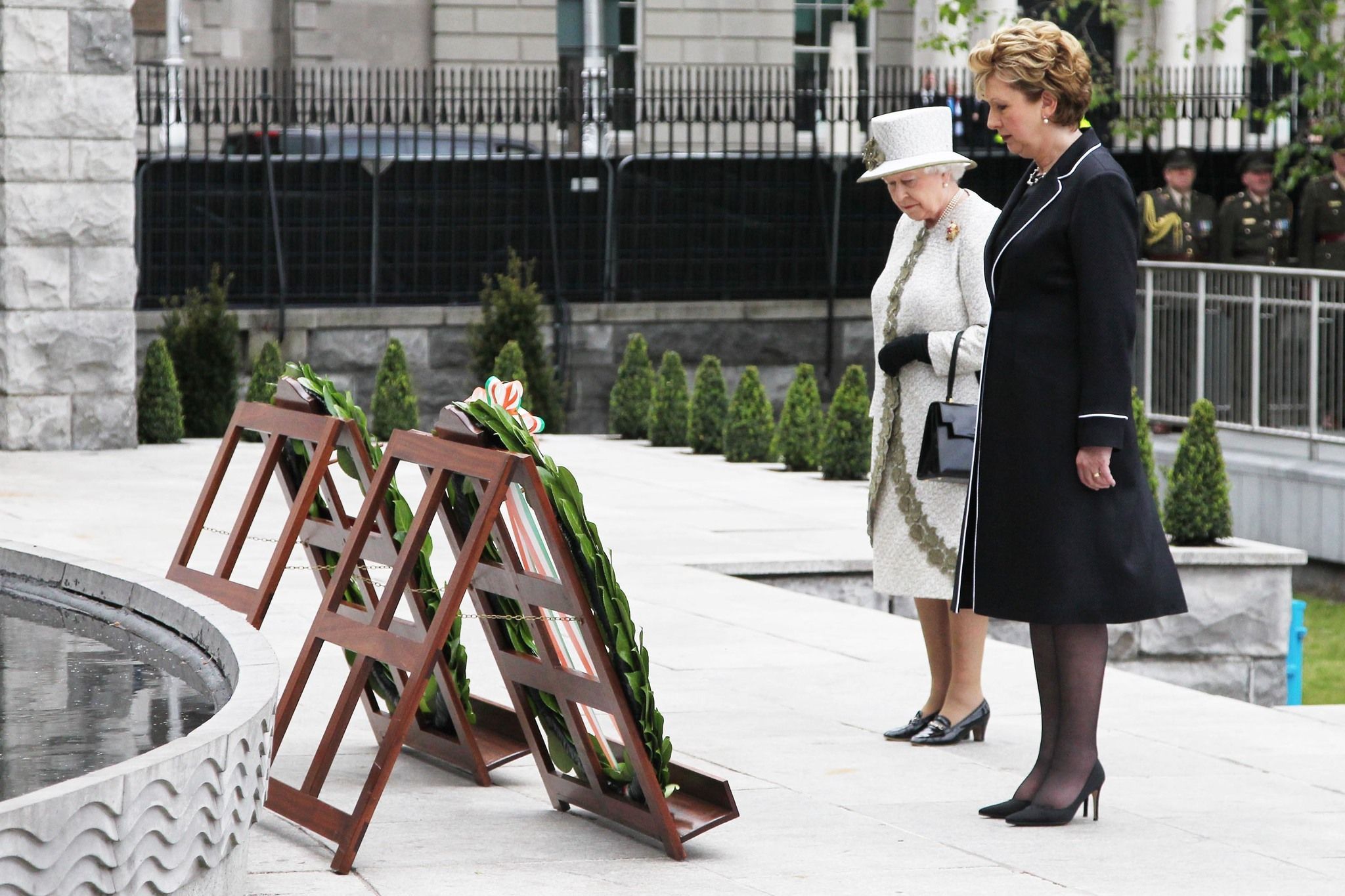 Queen Elizabeth and President Mary McAleese at the Garden of Remembrance during the Queen's 2011 state visit to Ireland. RollingNews.ie photo.

Adams: The Monarchy and a Tolerance of Differences

For those of us living in the north of Ireland the English Queen Elizabeth has been omnipresent in our lives for a long time. From our postage stamps, coins and banknotes to the names of our public buildings.

In Belfast, there are two bridges named after English queens. The Queens Bridge was opened in 1849 and is named after Victoria. The Queen Elizabeth Bridge is named after the woman who has just died. It was opened in 1966. Interestingly, there was a row among unionists in Belfast City Council who wanted to name it after Unionist leader Edward Carson whose statue stands in front of Parliament Buildings at Stormont.

There is also Royal Avenue and the Royal Victoria Hospital and countless other thoroughfares named after British royals. There is Queen's University and the Albert Clock named after Victoria’s other half.

Royal this and royal thats. Everywhere. And this is even before we get to the Crown Forces and all their Royal Regiments.

Dublin also has its royal remnants. For example, for the almost ten years that I was a TD in the Dáil I parked each day in the shadow of a statue to Prince Albert, the consort of the English Queen Victoria.

Whether we reject or embrace this phenomenon is immaterial. Because Elizabeth has been at the center of it all for so long she has become a constant in our lives. The current protracted and saturation media coverage adds to this. But the responses to her death are complex and diverse.

Royalists and supporters of the monarchy will be personally affected by Elizabeth’s death. Those of us who don’t share this view need to be aware of it and act accordingly, and respectfully. We will also be mindful that Elizabeth’s family has lost a much loved family member. For them, this is a heart wrenching moment. Most of us can have empathy at a human level with that. I certainly can.  Which is why I sympathize with them.

At the same time, I have no time for hierarchies, aristocrats or royalty, whether they are political, religious, secular or industrial. They are all about power for elites.

No one should have an entitlement to a life of privilege and wealth because they are deemed to be divine rulers. I believe in equality. In community. In citizenship. In self-determination. None of us should ever be anyone’s subject. Working people should always be mindful of our own class and of our own history, our  values and entitlements. If I was English I would be an English republican. And a socialist. These are internationalist beliefs.

But I’m Irish. An Irish republican and a socialist. And we Irish should be aware of our own nation with our culture, language, history and customs.

For many reasons we have our own special experience of the English monarchy. It has been a tragic and costly one. For centuries we have been denied our right to govern ourselves. The Empire colonized us and many other people. Across the world and in our own place. Countless crimes were committed globally in the name of the crown. Military interventions into other peoples’ affairs continue.

Society must reflect and include the entirety of its people, not part of them. Inclusivity is vital to the well being of any community, whether a nation, the global village or a local populace.

I acknowledge the attachment that many within the unionist section of our people have for the English royal family and their genuine grief at the death of their Queen. That has rightly been reflected in remarks by Mary Lou McDonald and Michelle O'Neill and others. Their comments have been balanced, sincere and respectful.

Queen Elizabeth’s remarks and her important gestures during her visit to the Garden of Remembrance in Dublin in May 2011 and her subsequent meetings with Martin McGuinness were helpful and unprecedented, although nowadays the willingness of the London government to tear up agreements with and about Ireland - nothing new in this - illustrates the need to go beyond symbolism in the search for new and genuine rapprochement.

Martin McGuinness was firmly of the view that the British royals were strong supporters of the Irish peace process. I agree. He and I met with Charles in May 2015. At our first meeting Martin and I acknowledged the hurt he and his family suffered by the actions of republicans. We were conscious also of the sad loss of the Maxwell family whose son Paul was also killed at Mullaghmore.

We and Charles also discussed the hurt inflicted on my neighbors and friends in Ballymurphy and Springhill by British crown forces and the killings of Martin’s neighbors and friends in Derry on Bloody Sunday by the regiment of which Charles is commander in chief. We talked about all this and other related matters. Our conversations were important. And genuine.

Charles is now the King of England. He has a responsibility to act on his own words and on the words of his mother as he adapts to his new role.

We are all living in a time of transition for the people of Ireland and between Ireland and Britain. There are huge challenges. They are multiple and immediate. These challenges must be overcome.

They include bringing the current constitutional arrangements gently to an end as set out in the Good Friday Agreement by building a new democratic alternative to the dysfunctional union with Britain.

I was very pleased to get an email from Colm Dawson from New York. Colm, who is originally from Belfast, read my article about Long Kesh handicrafts in the Irish Echo.

He writes: "During internment my mother used to bake homemade soda farls and send them up to the Cages. In 1973, in recognition of her contribution, we received this lovely little harp. I believe it came from Conn McHugh, Owen Quigley and your good self.

"It has been sitting in my living room in NY for over twenty years. And it’s in great shape. That wee harp sat on top of our TV in Belfast for decades. We had another one that my dad won in a raffle at the PD, also in 1973, that sat beside it. Both are now here with me."

Margaret and Mickey Dawson, Colm’s parents, were outstanding supporters of the republican prisoners and champions of our struggle. Míle buiochas Colm. Anyone else with prison memorabilia stories get in touch.