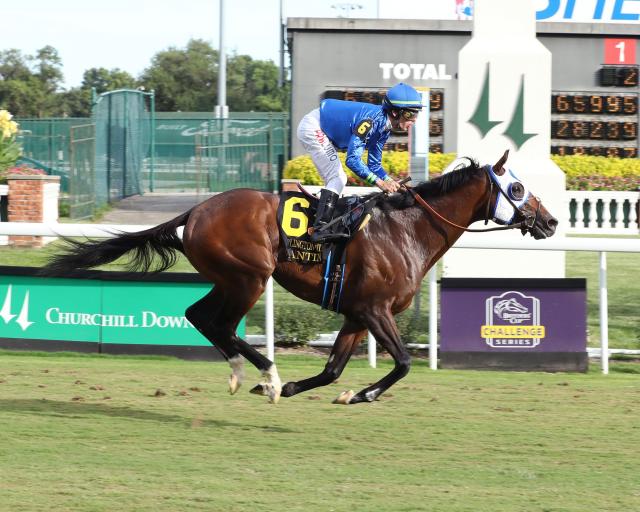 The Arlington Million isn’t what it used to be but then neither is the purse money on offer. Yet, the storied race still offers Grade 1 credentials, which went to the Brendan Walsh-trained Santin on Saturday at Churchill Downs.

With Arlington Park now shuttered, the parent company moved the race (reduced from 10 furlongs to nine) to its signature venue in Louisville. The grass course was anything but lush, yet that didn’t bother Santin, which pressed the pacesetter down the backside before engaging the leader around the far turn. The 4-year-old Godolphin homebred colt took the lead in midstretch and reached the wire in front by almost two lengths. He paid $6.90 to win as the third choice in the eight-horse field.

“Tyler (jockey Gaffalione) gave him a beautiful trip,” Walsh said. “I think (nine furlongs) is as far as he wants to go. He broke his maiden and won his second start at one mile. I think the goal is the Breeders’ Cup Mile. We’ve got a couple of options we’ll talk about how to get there.”

A return to competition against Ontario-breds appears to be just what Scott Abbott’s Silent Runner, a 3-year-old homebred colt, needed. The Mike Doyle trainee won the Lake Huron Stakes at Woodbine on Friday by one and one-half lengths with David Moran in the saddle.

Silent Runner closed out his 2-year-old campaign with a win in the Frost King Stakes but had been ineffective this year in two tries against open company. The wagering public was expecting big things from him in this turf dash as he went off the heavy favorite. He paid $4.30 to win.

Doyle also saddled the winner of the sixth race on the Friday card there. Stronach Stables’ Elusive Knight, in just his second start for Doyle, won his first race since winning at first asking nearly three years ago. The 5-year-old gelding rallied under Gary Boulanger to take this first-level allowance/optional claiming route by three lengths. He returned $11.30 to win.

Irish-bred filly Going Global returned to winning form in the Grade 2 Yellow Ribbon Handicap at Del Mar on Saturday. The 4-year-old filly, which is owned by a large partnership and trained by Philip D’Amato, went to the post as the 125-pound highweight against six rivals off a third-place finish in the Gamely at Santa Anita in late May.

Jockey Umberto Rispoli settled Going Global into midpack early in this mile and one-sixteenths race on the lawn. They advanced on the leaders approaching the quarter pole at which point the race was as good as over. The filly, bred by Nicky Hartery, pulled away to win by three lengths. She paid $3.40 to win.

“When we came out of the turn, she gave me another gear,” Rispoli said. “Then it was all over. She did it; I didn’t do a thing.”

SALVE FOR THE SPIRIT

Jerry O’Dwyer isn’t in the midst of a banner season, having won with just three of 86 starters going into last Wednesday’s fourth race at Saratoga. A win upstate, however, can make you forget such things as bad statistics. O’Dwyer saddled Della Nash and Jun Park’s Sibelius to a nearly four-length win in a second-level allowance-optional claiming sprint on the main track. Junior Alvarado had the mount on the $5.40 winner.