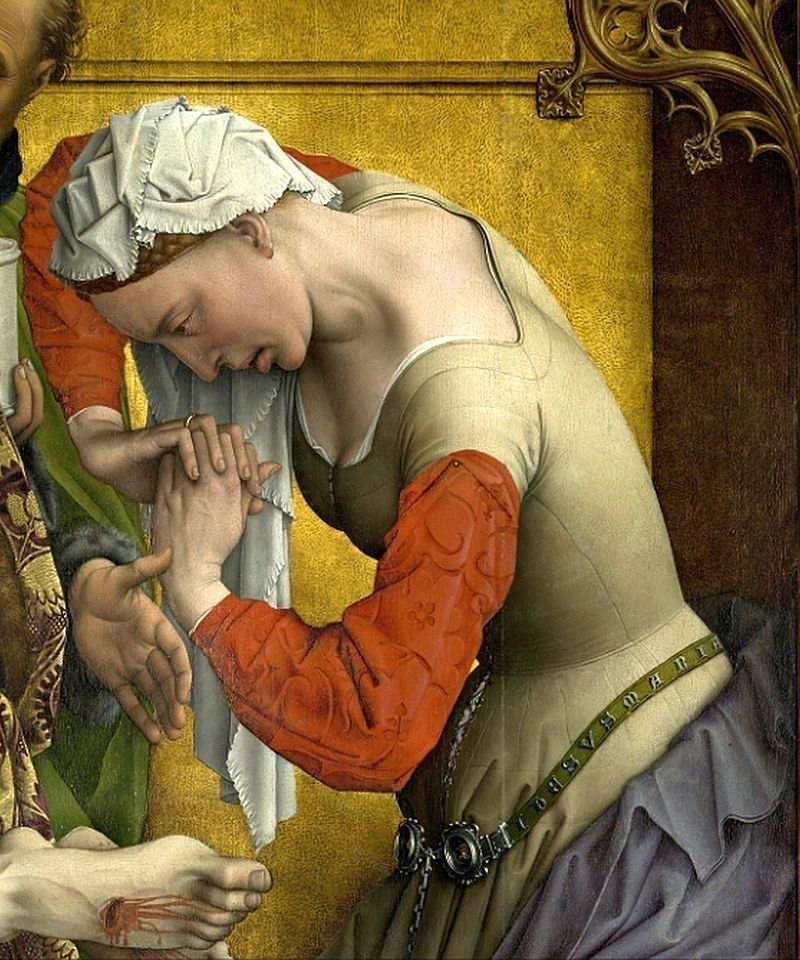 Detail of Mary Magdalene weeping at the crucifixion of Jesus, as portrayed in The Descent from the Cross (c. 1435) by the Flemish artist Rogier van der Weyden.

After the crucifixion the fledgling movement of Christians commemorated the life and death of a man who had deeply impacted their lives and who they firmly believed had come back from the dead for reasons they didn’t understand but which included his love for them.

The records we have of those times reveal that his early followers met in small groups to support each other in prayer and community as they tried to come to terms with the monumental events that they had witnessed, and this process continued into the generations that followed. The four gospels were mostly written late in the first century, probably completed in the early years of the following one.

There is evidence of women playing leadership roles in the deliberations and ceremonial practices in those early centuries. However, as time went on, the leadership structure reflected more and more the male-dominated culture that consigned women to minor ecclesial roles – a tradition that continues to the present day.

Apart from Jesus’s mother, who, according to tradition, remained a virgin after her son was conceived and who has always been placed on a high and special spiritual pedestal by the faithful, the next most prominent female featured in the gospels is, undoubtedly, Mary from the town of Magdala, a fishing area in the western shore of the Sea of Galilee.

In scripture and other contemporaneous documents Mary is portrayed as one of Jesus’ closest confidants. She kept vigil at the cross on the fateful day, discovered the empty tomb after his resurrection and is commissioned by the risen Christ to tell the others. She is mentioned by name twelve times in the four gospels, more than nearly any of the apostles.

Unlike Peter, who denies Jesus repeatedly, and Judas, who betrayed him, and different from the disciples who fell asleep in the garden and the followers who fled the scene after Jesus’ arrest, and also unlike the male disciples who locked themselves in an upper room for fear of the authorities, Mary Magdalene never yielded to the pressure to walk away and abandon the man she liked and who inspired her.

The male leadership who had acquitted themselves poorly, showing no guts when the pressure was on, felt deflated and struggled to assert some authority over the nascent church community. Mary Magdalene had shown real leadership during the crisis but the male-dominated culture called for men to hold the highest positions of authority.

Some scholars believe that in response to this male dynamic Mary’s prominence had to be diminished. So, the word went out to all believers that Mary was a prostitute, a reformed harlot to be admired for the determined about-turn she made in her life but, with her background, scarcely deserving of unqualified admiration.

In the year 591 Pope Gregory the First confirmed this false characterization in a sermon naming Mary as a wayward woman who, before her conversion, sold her body to pleasure men. This unfortunate papal characterization of the Magdalene lady has stuck.

Sculptures and paintings throughout history depict her as a repentant sinner wearing flimsy clothes highlighting her reputedly dubious past. She eventually was named the patron saint of sexual temptation, the woman the faithful could turn to in prayer when they had to deal with what were euphemistically called bad thoughts which were always related in some way to sexual imaginings.

In Ireland, starting in the late 18th century, Magdalene asylums were founded to house so-called fallen women, but their main use gradually altered to include troublesome females or indeed good-looking women deemed gamey and flirtatious by some local priest or luminary. These “homes” continued after Irish independence was achieved in 1922 with over 10,000 unfortunate females consigned to them before they were closed in the 1980s.

The Protestant reformers in the 16th century insisted that Gregory’s assignation of prostitution to Mary was theologically suspect, but it was firmly embedded in the Catholic story until 1969 when, finally convinced by the evidence, Mary was elevated by Rome. But her reputation lingers as a woman who sold her body before hearing a higher call.

Public interest in Mary’s sexual life arises not only because of her past actions before meeting Christ but also because of fascination about the nature of their relationship. The musical Jesus Christ Superstar (1971) created a big stir at the time because it shows her in love with Jesus.

And in 2003 "The Da Vinci Code" by Dan Brown postulates the possibility that Christ survived the crucifixion, married the lady from Magdala, and that they had a child together. While this imagined romance was repudiated by scholars as historically inaccurate, the book sold over 80 million copies and it has been translated into 40 languages. In 2006, Columbia Pictures released a movie of the book which again has been hugely successful.

The idea of a love affair between Mary Magdalene and Jesus is full of intrigue. It certainly humanizes him, moving him beyond our sanitized version of his manhood and showing a regular male more realistically dealing with passion and emotional attachments like the rest of us.

The non-canonical but highly-regarded Gnostic gospels mention Mary as a close companion of Jesus. In one of these, The Gospel of Philip, one line reads “The Teacher loved her (Mary) more than all the disciples; he often kissed her on the mouth” which experts suggest may not indicate a sexual dimension to their relationship but certainly affirms close emotional ties. Perhaps, Jesus enjoyed her company because of her intellectual and spiritual qualities.

In chapter 8 of Luke’s gospel Jesus heals her of seven demons but there is no indication in the story about her line of work. In the Jewish life of that time, troubled people, men and women with emotional issues, were understood to be possessed by evil spirits who brought on their unhappiness. This belief system is still common in some African and Asian countries.

Other reliable sources from the early church suggest that Peter and Andrew questioned how Mary could be the recipient of special revelations when they, male apostles, were around. The culture of the first century supported their attitudes and, true to that tradition, women are still excluded from any leadership position in a church run by males often dressing in pre-medieval costumes.

Pope Gregory’s infamous sermon has been officially debunked for many years, but Mary Magdalene lives on in the popular imagination as a promiscuous woman who repented. Pope Francis, in 2016, elevated her liturgical importance, again rejecting his predecessor’s teaching, and he ordered that she be referred to with the highest solemnity as “Apostle of the Apostles.”