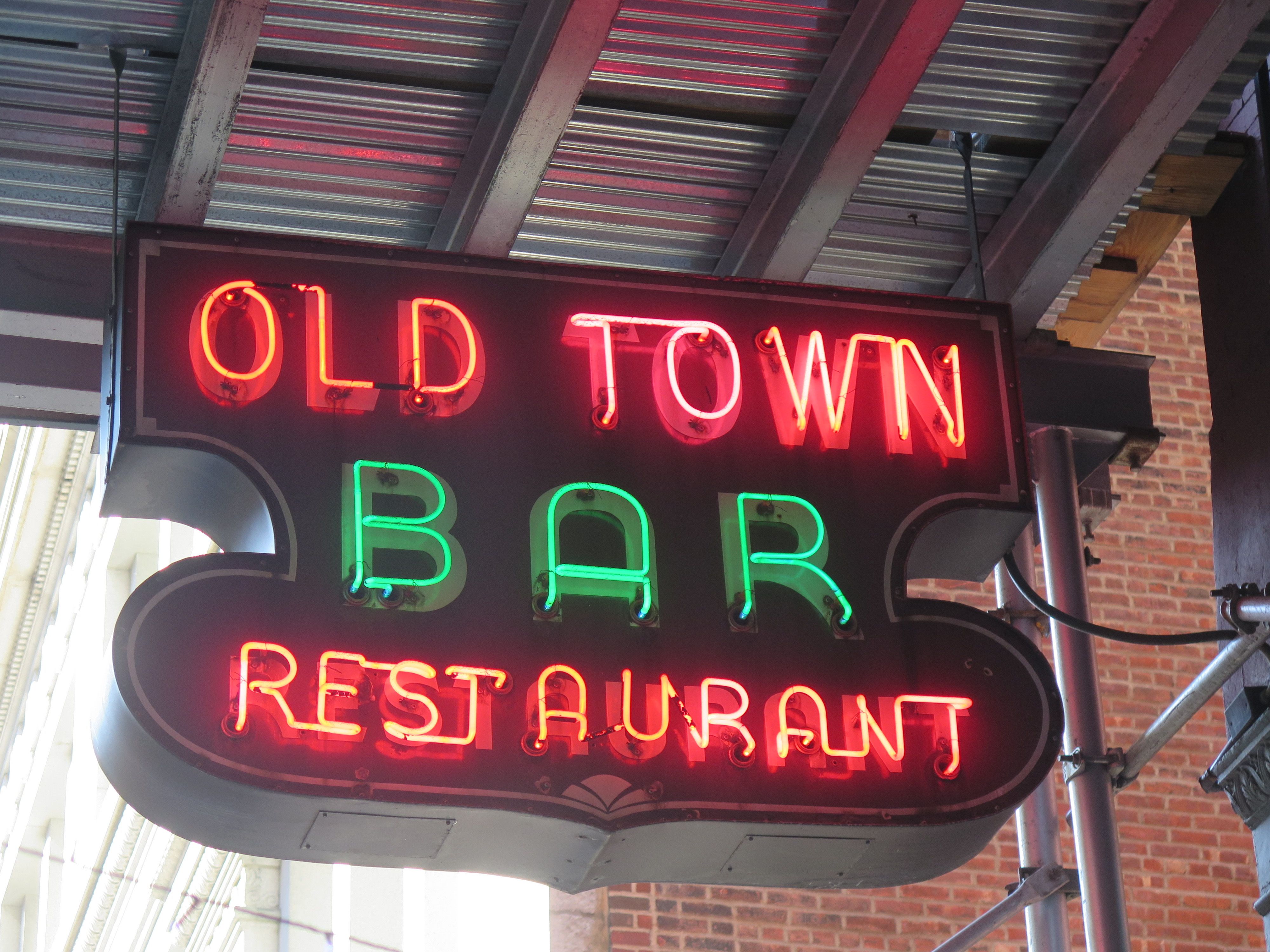 Walking into the Old Town Bar at 45 East 18th St. in Manhattan is more than simply entering an elegant space. It is a trip back in time to an era when gas lamps lit New York. The lights are now electric, but antique gas lamp chandeliers hang from the ceiling, still bathing the bar in soft light. However, more than the chandeliers are historic here. The long bar, high ceilings, huge beveled mirrors and other antique features also re-enforce the illusion of stepping back in time. The 55-foot-long marble and mahogany bar has served customers for over a century. The tin tiled ceiling hangs from an extraordinary height of 16 feet, a relic of an era when high ceilings were an architectural feature. The tiled floor is also a throwback to the start of the last century. High wooden booths with inlaid mirrors, antique cash registers, a slew of historic photographs complete the timeless feel. Food even arrives from the upstairs kitchen via the oldest dumbwaiter in any New York tavern.

Sadly, perhaps the most striking historic feature in the bar is only visible to male customers, Old Town’s huge porcelain urinals, whose centenary was honored in 2010 with a celebration. The only surviving Hinsdale Urinal on the East Coast was even honored at its centenary bash with a congratulatory proclamation by Mayor Bloomberg.

Old Town’s spacious elegance is a magnet for its loyal clientele who love to imbibe a few drinks and its historic ambiance. Surveying the hubbub on a Friday night, it is hard to imagine that a few years ago, the elegant old bar had was fighting for its survival, until an Irish American rescued it.

Old Town did not begin life as an Irish bar; it was originally a German locale opened in 1890 by Jacob Berckel. Later, another German American took over, changing its name to Viemeisters. The present-day building, which dates from 1910, is located not far from Union Square, once a German stronghold whose principal attraction was  the legendary German Restaurant Luchows, a New York institution for a century, before it closed in 1986.

Then, after World War I disaster struck — America enacted Prohibition. The bar had to transform itself into Craig’s  Restaurant in order to disguise its true identity as a speakeasy. The booths during prohibition were re-designed to be pulled out to hide booze underneath and then quickly retracted before police raids. Payoffs to the local police, though, ensured that the owners and patrons were  regularly warned before the pro-forma raids.

After Prohibition’s repeal in 1933, another German-American family, the Lohdens, bought the bar, changing the name to Old Town. Changes in the area, however, began to thin the crowds. World War II made German bars unpopular. The closure of both the 18th street trolley stop and the subway station further reduced the bar’s clientele, as did the movement of many department stores uptown. By the 1960s, Union Square had become a mecca for drug sales and the area was so dangerous that the bar closed before dark. Claus Lohden’s son, Henry, struggled to keep the bar open for his few remaining customers and the place fell into disrepair.

Recognizing the bar’s potential, Irish-American Larry Meagher offered to manage it and he made a number of important changes. He opened the bar in the evenings and began to serve food. Before Meagher, most of the clientele were men, but he also welcomed women. Meagher even made the bar gay friendly, protecting regular customer artist Andy Warhol from the taunts of homophobic clients. Most of all, the affable and personable Meagher drew on his Irish-American charm to create a friendly atmosphere and gradually the bar regained its popularity.

One feature that separates Old Town from many other New York Irish bars is its strong New York identity. Old Town is definitely a New York bar and its décor reflects New York, not Ireland. It needs no shamrocks or maps of Ireland. The memorabilia, including an early 20th century campaign poster for the present owners’ grandfather Matty Meagher, proudly displays the long history of Irish New York.

It is not surprising that the atmospheric bar has appeared in a number of films, music videos and television shows. The film “State of Grace” includes scenes from the bar, as does the movie “The Devil’s Own.” Art Carney recorded scenes in Old Town and his partner Jackie Gleason appeared in Old Town bar scenes in his final film. The series “Bluebloods" also featured many scenes in the bar. Canadian band House of Pain shot the video for their huge hit “Jump Around” there, too.

Old Town has always also attracted a number of writers, musicians and actors. The famed literary lions of New York’s Round Table used to be regulars. Later, the Rolling Stones and Liam Clancy of Clancy Brothers fame drank there.  Famous writers have also been regulars including  Seamus Heaney, Brian Friel and Peter Quinn. Poet Billy Collins read at the bar’s first Christmas party and  actors Natasha Richardson and Liam Neeson lit the flame of romance in one of the bar’s booths. Novelist Pete Hamill, for many decades teetotal, once wistfully remarked, “If I ever had a drink again, this would be the place.”

Frank McCourt, the author of “Angela’s Ashes” and a regular patron for decades, loved  one of the enduring Irish features of the Old Town: conversation, saying, “It’s a place to talk.” There are no blasting juke boxes in the Old Town or blaring sports events. One of the pleasures of a slow afternoon at the Old Town is a conversation with its affable bar staff who always greet regulars by name.

Larry Meagher inherited the bar and ownership of the building from Henry Lohden after  the German American passed away in the 1990s. Meager also died, leaving management of the Old Town to his children and now the next generation of Meaghers runs the bar. The present owners  appreciate the bar’s history and traditions and are committed to preserving Old Town as a unique New York icon and a living piece of the city’s history. They invite you to come in and enjoy this elegant old tavern’s timeless charm and warm hospitality.