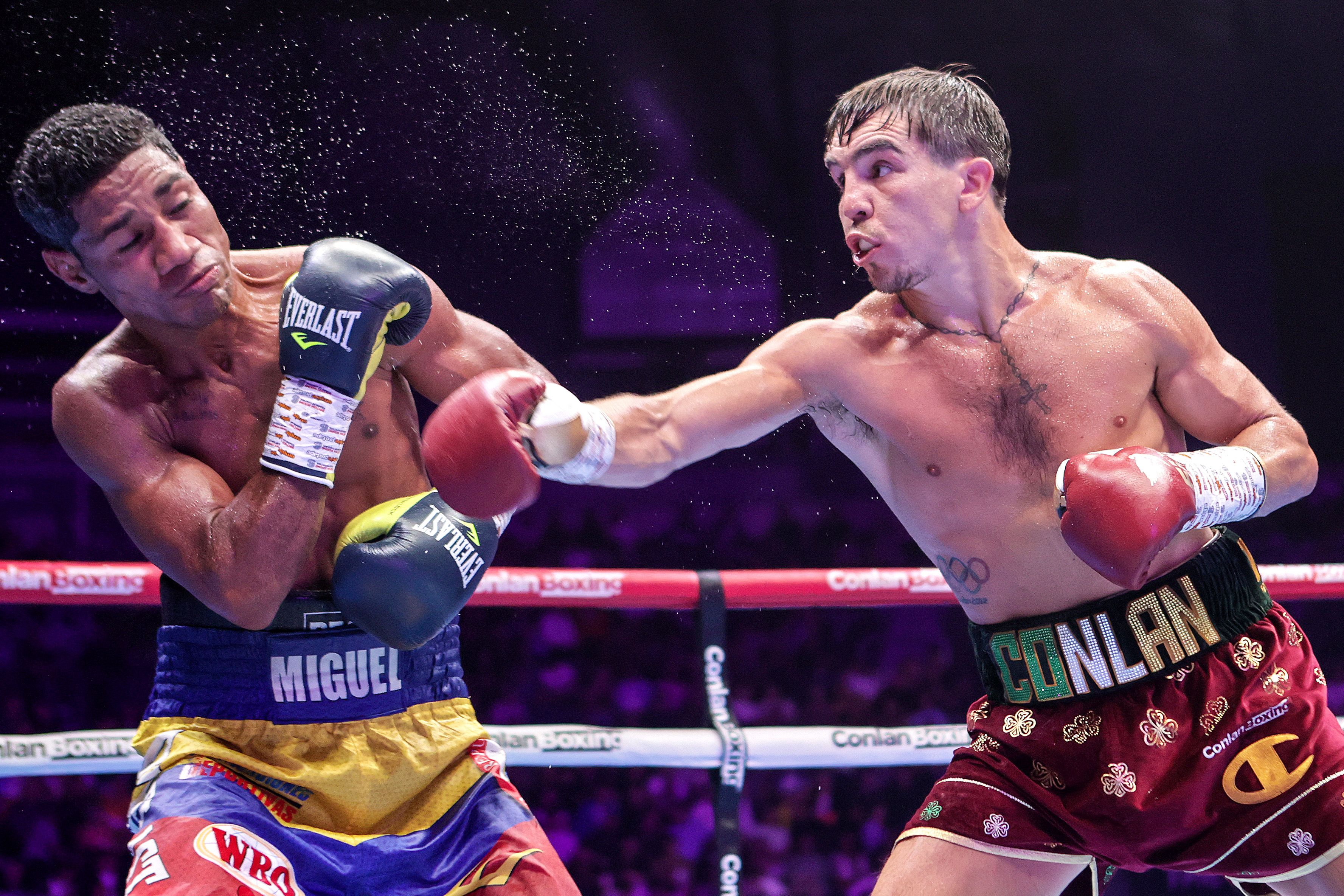 Michael Conlan going on the offensive against Miguel Marriaga on Saturday at the SSE Arena, Belfast. INPHO/LASZLO GECZO

Feargal McCrory will have to wait a little longer for his U.S. debut,  scheduled earlier for this Friday at the Amazura Concert Hall in Jamaica, Queens. The show has been pushed back to Sept. 16.

The undefeated super featherweight [11-0, 5 KOs] was to end a more than three-year lay-off with a six-rounder against Mexican-born Canadian citizen Alejandro Torres Rynn [7-3, 4 KOs].

Still training in Tyrone, McCrory was notified last week of the new date by the promoters. He subsequently delayed his return to New York where he moved to early this year.

“It’s a small setback but we’ll be even more ready to go,” he told the Echo, adding that as far as he was aware Rynn remains his scheduled opponent.

Rynn is no stranger to Irish fighters. He dropped an eight-round unanimous decision to John Joe Nevin in Bensalem, Pennsylvania, in March 2018.

Michael "Mick" Conlan was stellar in his first fight back after last March’s failed bid for the World Boxing Association [WBA] featherweight title. He returned to his Belfast hometown to outclass veteran puncher and three-time world title challenger Miguel Marriaga over 10 rounds last Saturday at The SSE Arena.

Conlan prevailed by scores of 99-88 [twice] and 99-89, decking Marriaga three times -- in the in the seventh, eighth, and ninth rounds – in the process. The once-beaten world title contender upped his ledger to 17-1 [8 KOs], while his Colombian foe dropped to 30-6 with 26 KOs.

The icing on the cake for the victor was taking Marriaga’s vaunted power, albeit Conlan’s knees were buckled in the 10th round.

Said Conlan: “Even in the last round, he hit me with a shot. That guy can punch. He has 10 more knockouts than I have fights. He hit me with a jab in the first round, and it was like, ‘Oh, this guy actually can bang.’ I had to be careful and use my skills, which I did.

“In the last round, he caught me with a shot. Listen, I've been using my legs all night. I was a bit off the pace. He was pushing it. He landed a good shot. He buckled me a little bit. I felt it, and for me, to kind of come through that and it’s the last round… I got knocked out in my last fight in the last round. I think that says a lot. I’m back, baby. I’m ready for any of them.”

He called out Wood for a rematch, five months after the Englishman – down on points -- had successfully defended his WBA title with a 12th round KO of Conlan in an epic bout.

“Obviously, I want Leigh Wood. It’s obvious, but Leigh has his own situation. So, hopefully he can deal with that and come through and the rematch can be done,” he noted. “If not, it’s any other champion. I will be world champion, and I know I will. Whoever I face, I know I’ll beat him.”

Conlan was one of four victorious Irish fighters at The SSE Arena promoted by Las Vegas-based Top Rank.

Junior middleweight Kieran Molloy improved to 2-0 [2 KOs] with a second round TKO of journeyman Evgenii Vazem [9-36, 7 KOs].  The Galway product landed a four-punch combination, punctuated by a right hook to the body, that put Vazem down for the count at 1:23.

"I fit right in here. I'm an entertainer. I'm a good fighter, and I proved that I'm a good boxer as well,” said the confident Molloy. “I didn't even   look for that shot. I just landed that uppercut a few times. His elbows were coming up, and it was a nice, sinking body shot, so I just took it."

Welterweight Paddy Donovan swept all eight rounds against Tom Hill to up his record to 9-0 [6 KOs].  The Andy Lee protégé, a southpaw like his famous trainer, was returning from a nearly six-month layoff.

“It’s very important to get the rounds in,” said Donovan, who was in his first eight-rounder. “Tommy is a very, very tough fighter. He’s beat the Irish number one welterweight, knocking him down twice in the fight, so we know what he’s capable of.”

Featherweight Kurt Walker, with a six-round unanimous points decision over Argentine Marcos Gabriel Martinez, was the other victorious Top Rank fighter. The 2020 Tokyo Olympian is now 3-0 with one KO.