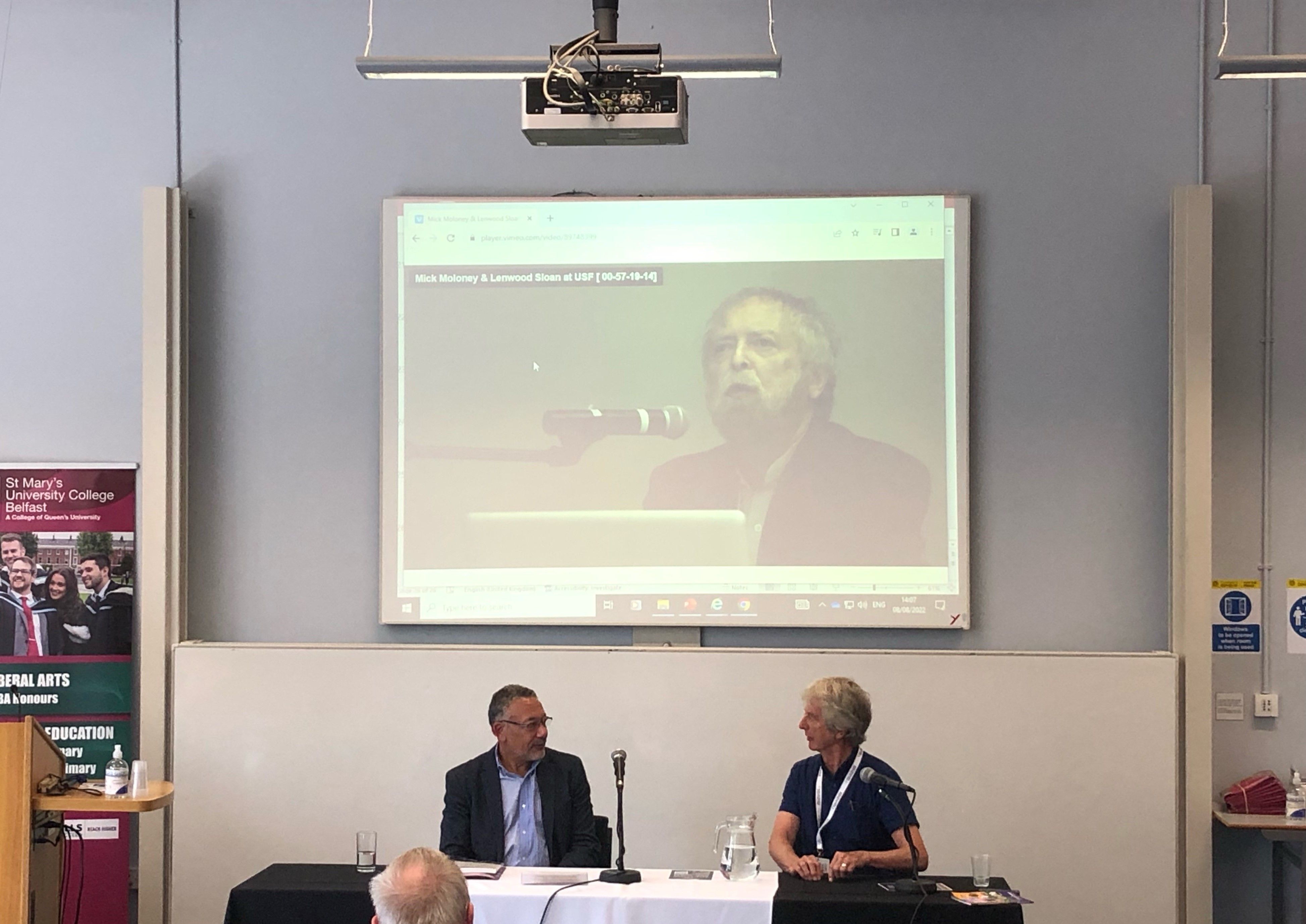 ROOTS: Dennis Brownlee discussed the links between the Irish and African-Americans. Behind the pair is a photo of the late music maestro Mick Moloney

Every Irish American is familiar with the searing images of a dispossessed people having to leave Ireland during the Great Hunger — an exodus that grew the Irish diaspora exponentially.

However, one aspect of the Irish Diaspora that hasn't (until recently) been extensively explored is the African-American Irish diaspora.

That was put right in Belfast last week when Dennis Brownlee, founder and Chairman of the African-American Irish Diaspora Network (AAIDN) addressed a Féile an Phobail audience in St Mary's University College on the strong, but understudied, links between Irish Americans and African-Americans.

AAIDN was established in February 2020 to promote shared history and culture, as well as to foster economic empowerment.

Really enjoyed catching up today with @SenKennedy in NYC, his team in the capital of Irish America, Buffalo, NY, to chat with Prof Christine Kinealy of Connecticut, Dennis Brownlee of D.C. who are pioneers of African American Irish Diaspora Network @aaidnetwork @IrishNetworkBUF pic.twitter.com/zgeOjDgqTX

Washington DC-based Brownlee began his talk by stating that up to 38 per cent of African-Americans in the United States have Irish ancestry. Among that figure were and are many notables, including Beyoncé, Shaquille O'Neal, Muhammad Ali, Barack Obama, Billie Holiday, the Rev Jesse Jackson, Colin Powell and Alicia Keys.

The first part of the talk explained the links that were fostered between Ireland and African-Americans when escaped slave and famed abolitionist Frederick Douglass visited Ireland at the height of the Famine in 1845.

"Frederick Douglass found his trip to Ireland to be a transformative experience," explained Dennis Brownlee. "He was awed that the people of Ireland treated him as a human being, they looked him in the eye when they spoke with him and addressed him as 'Sir'. He was shocked by the extreme poverty in Ireland, and noted that we are more alike, than we are different. His famous phrase, 'Agitate! Agitate! Agitate!' was influenced by Daniel O'Connell, who told him to agitate for change."

Speaking on his own Irish heritage, Dennis Brownlee stated his Irish links come through his mother, and go back to the north of Ireland. Growing up, Mr Brownlee said he wasn't fully aware of his Irish ancestry, until he spoke with his neighbour Stella O'Leary, who is a founder of Irish-American Democrats.

Mr Brownlee said his mother had attended Berea College, which was founded in 1855 by Ulsterman and prominent abolitionist, John Gregg Fee. Berea College was the first co-educational and racially integrated college in the American South, and charges its students no tuition fees, based on the founding ethos of John Gregg Fee.

The most noted example of this tension is the 1863 Draft Riots, when Irish-Americans lynched and killed hundreds of African-Americans over fears they would take their jobs whilst they were away fighting in the American Civil War. Equally discordant are the deeds of Irish settlers who became slave owners and the strong Irish presence in police forces which historically, and to this day, can be a negative presence in African-American lives.

This was contrasted however with the feelings of Irish people in Ireland, who rejected the discrimination and were appalled at acts of racism and intolerance. Mr Brownlee said.

"Irish people in Ireland were less willing to tolerate discrimination than Irish in America. Daniel O'Connell even warned Irish people going to America to not treat African-Americans badly and told them to treat them as they themselves would like to be treated.

"During the Draft Riots of 1863 there were also several examples of Irish people who came to the aid of African-Americans and worked to quell the violence that erupted, but this is often overlooked."

Cultural links between Ireland and African-Americans have blossomed especially in music and dance.

The banjo, which was remade in America by slaves, was incorporated wholly into Irish music, and also into bluesgrass and country music.

Based on the West African instruments, the kora and the akonting, the banjo has since become a staple of traditional Irish and Americana music.

JUST 1 WEEK until the virtual launch of #FrederickDouglass Way! Join AAIDN board member Christine Kinealy for this special journey following Frederick’s footsteps in Dublin, visiting venues where he met with Irish abolitionists along the way.
REGISTER 👉 https://t.co/JaRpN4P0eM pic.twitter.com/8qAXWQSYPR

In Seneca Village (a former settlement of African-American landowners and freemen, which is now located where Central Park stands in New York) and in the Five Points of New York, huge dance competitions were held between Irish and African-American competitors.

"The most famous of which was a dance competition between Jack Diamond and William Henry Lane. They were called Master Diamond and Master Juba. They held three rounds, one where they danced in their own style, so either Irish dancing or Juba, the next they danced in each other's and the final round they danced in a mix of the two. William Henry Lane came out on top in the competition, but it was developments such as this, which led to the development of modern-day tap dancing, which takes its influences from both traditions."

Our summer reading list has arrived! Catch the latest edition of GreenLight for our Irish and Irish American book recommendations at the link below.

In terms of social justice, the links between Ireland and African-Americans is also strong. Dennis Brownlee spoke of how links were formed during the Civil Rights movement, when the Northern Ireland Civil Rights Association (NICRA) took its influence from the fight against the Jim Crow laws which made African-Americans second class citizens in the Southern States.

AAIDN is also promoting scholarships for students from the University College Dublin Smurfit School of Business to attend Howard University, one of the most prestigious Historical Black Universities in America.