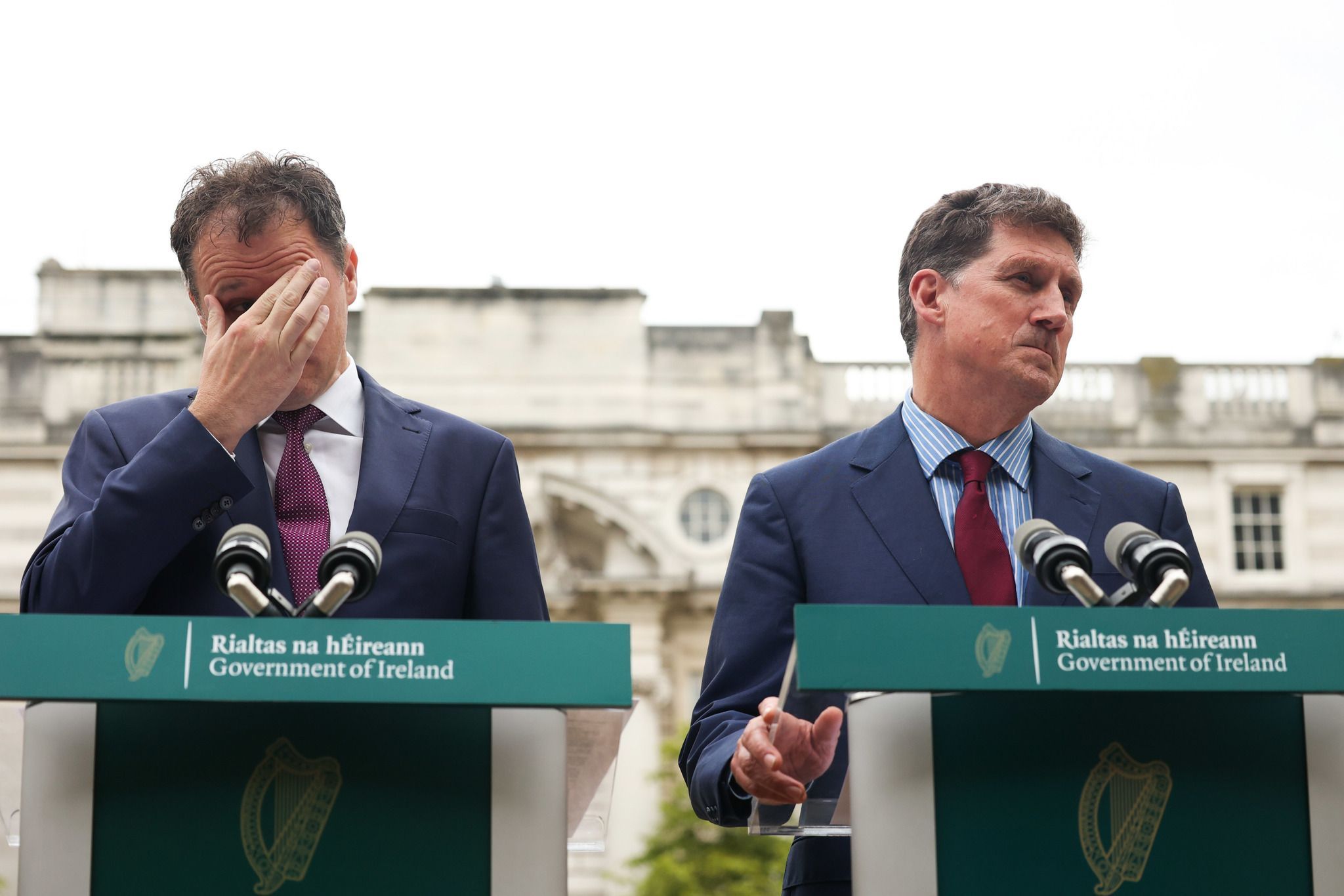 Pictured in the Courtyard at Government Buildings are (l to r) Fianna Fail Minister for Agriculture, Charlie McConalogue and Green Party leader and Minister for Environment, Climate and Communications, Eamon Ryan. Photo by Sam Boal/RollingNews.ie.

The headline on the front page of the Irish Times on Monday of this week could have appeared in any newspaper in any country on our overheating planet: "Climate targets mean huge lifestyle changes."

The headline could easily run in the United States where the matter of lifestyle has always been an imperative.

Lifestyle is a key ingredient in the life of today's Ireland so the first paragraph of the Irish Times story was certain to attract wary and weary eyes.

It stated: "The Cabinet has been warned that unprecedented step changes will be needed in lifestyles, business models and emissions reductions before 2030 if new climate targets are to be met."

Now it's fair to say that Ireland isn't anything close to being the world's greatest polluter, though in the matter of methane emissions from farm animals, specifically cows, the Republic is prominent enough in the global league table.

And it is emissions from cows that have dominated the Irish climate change and emissions reduction story in recent days. Last week saw the problem in a clear light by way of a joint press conference given by Fianna Fail Minister for Agriculture, Charlie McConalogue, and Green Party leader and Minister for Environment, Climate and Communications, Eamon Ryan.

These are not exactly the same tasks though of course there was always the possibility of compromise between the two. The maximum target for reductions in agricultural emissions by 2030 was pegged at 30 percent. The lowest level was 22 percent. The agreed level is now 25 percent.

This sounds like a good outcome, or at least an outcome. But as one columnist in the Sunday Independent noted, the atmosphere doesn't recognize or consider compromise.

But, in fairness to Irish farmers, they do not go out of their collective way to damage our shared atmosphere and environment unlike, say, the Bolsonaro government in Brazil, the current majority on the U.S. Supreme Court, or indeed the Russians who are causing untold environmental damage even as they go about their evil business of killing as many Ukrainian men, women and children as they can.

This very week four years ago - when the world was in slightly better shape - this page pondered the negative effects of Ireland's farting cows thus: "According to reports, Ireland is completely off course to achieve its 2020 and 2030 climate change targets, this according to the Climate Change Advisory Council’s Annual Review for 2018. Following on from last year’s review, Ireland is now in an even worse position, the Irish Times reported.

"Ireland isn’t home to many industries of the smokestack variety compared with much of the rest of Western Europe, though there are for sure a great many more road vehicles than was once the case.

"Ireland, however, is heavily agricultural and the result is significant agriculture-based and land use emissions which increased by 2.7 percent in 2016, and by 4.5 percent relative to 2014, this according to the advisory council’s review. The view ahead is that agricultural emissions will continue to rise.

"This is in large part due to farting cows - more and more of them.

"Ireland is gifted with a picturesque landscape and a climate which ranks as moderate – discounting the current drought that is – but when it comes to judicious management of land and the environment, successive Irish governments have been poor stewards."

Four years later, and taking into account the temporary emissions reductions due to Covid, the talk of emissions and targets is much the same, the climate change crisis a good deal worse.

There are 6.6 million cows in the Republic of Ireland's "National Herd." You can add on Northern Ireland's herd as emissions tend to be, well, cross border.

Reducing the size of the Republic's herd and other changes in agricultural practice designed to reduce emissions will be costly.

"Huge lifestyle changes" will indeed be an added cost. But what will be the cost if Ireland, the United States, and all the other nations on earth do nothing?