Home Pragmatic Kerry get better of hardworking Galway in final 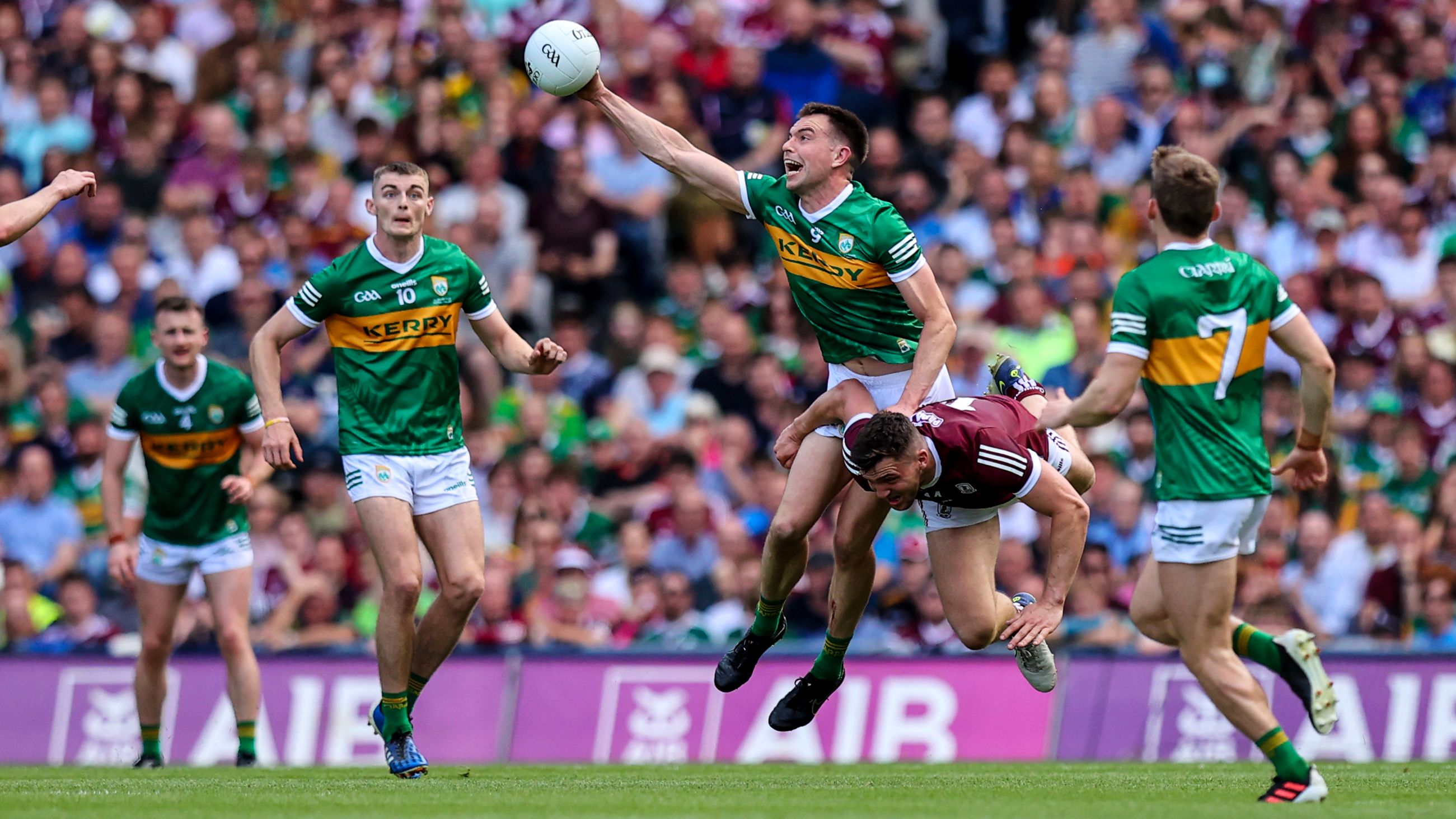 Pragmatic Kerry get better of hardworking Galway in final

Races are won at the end, not the start and Kerry proved that on Sunday before a packed house in sweltering Croke Park.

A good start may be half the battle… but it doesn’t trump a great finish and that’s what Kerry produced to finally ease daylight between themselves and Galway in an enthralling All Ireland Football final.

In fact it was the Tribesmen who got off to a flier in this game and led both 0-4 to 0-1 and 0-5 to 0-2 in the first 20 minutes before Kerry proved themselves the old dogs for the hard road as they got the measure of their combative opponents as the game went on.

Like a heavyweight boxer, they threw combinations for the first hour of the game and then went for the jugular, not with a knock-out blow, but with a series of point punches which saw them put an eight year famine to rest by getting over the line as Sam Maguire winners.

The closeness of the encounter for much of the scheduled 70 minutes plus five extra had elevated the game as the partisans supporters in the stadium cheered on their colors. The Galway hare never got too far away from the Kerry hound pursuing them and the feeling was there, even late in the first half, that Sam would be heading south rather than west when Jack O’Connor’s crew all started to row together.

O’Connor has now won four championship and league doubles in the same year during his three different stints at the held of Kingdom affairs and this one will have come sweetest of all. He has been the manager of the majority of this panel when he took charge of minor teams post 2012 which won All Irelands under his stewardship.  After leaving the senior set-up in ’12, he took over the Kerry minors in the middle of the decade and helped start a five in a row at the grade.

To see many of those same players now complement those wins with a senior Celtic Cross was the crowning glory, particularly after the disappointments of the last few years when Kerry lost All Ireland an semi-final (against Tyrone) and final (Against Dublin) that many felt they should have won, albeit the loss coming after a replay.

A point in arrears at the interval, having shot seven wides to Galway’s one, O’Connor tore strips off his charges in the dressing-room and showed his intent by hauling off  veterans David Moran and Paul Geaney and replacing them with the Spillane brothers, Adrian and Killian.

Immediately, Kerry looked sharper and more mobile and it was the performances of those lads plus other subs Joe O’Connor, Paul Murphy and Micheál Burns which was the difference between the sides at the end.

Truth is Galway had a shallower pool to pick from and when they needed guidance down the final strait, they hadn’t got a Murphy to send on; all their substitutes failed to make any impact and when four were used, that means a serious reduction in dynamism coming to the denouement of the encounter.

In the end you could say that Kerry won the game because they were more pragmatic in both their approach and application of simple plans. Their kick out were slicker than Galway’s – who lost their own first four before finding a man and crucially their attempt to exploit their opponents indecision under a high ball not only yielded early results but also helped bring their star player and ultimate man of the match, David Clifford, into the epicentre of the action.

Once he rose majestically to fetch two skyscrapers of balls in and shot over the resultant marks, his confidence and those of his colleagues rose measurably around him.

Kerry also ruled the air waves out in the middle third and most times when either side went long, it was a player in green and gold who rose highest to claim possession. And in the modern day, possession is indeed nine-tenths of the law.

It is from such inches that the yards to victory are paved!

Galway to their credit worked their socks off all over the pitch to make up for these deficiencies and when the likes of Paddy Kelly starting breaking  high ball in this middle sector, in many cases they were first to sweep up the possession in such instances.

However, as we had predicted here last week, by game’s end it was obvious that Kerry’s need was the greater of the two and this resulted in players stepping up their form because they knew they had no hiding place if they returned vanquished to the Kingdom last Monday.  The description by the legendary Páidí Ó Sé many years ago of Kerry supporters as “effing animals” is especially true when defeat is the bedfellow in a further Sam-less year.

Pádraic Joyce and his backroom crew will on reflection see that they have come a long way but there are still several areas that need to be improved. Conor Gleeson had the huge Tribe fan-base in Croke Park on nerves’ end every time he approached the ball – and that sort of feeling spread through his defence from the first moment to last when he dealt poorly with situations like high balls or running out to tackle an opponents who had got around the fullback line.

They are also short of one marauding defender, though Kieran Molloy played beyond himself over Sunday’s final. At midfield too Father Time has caught up with Paul Conroy and if Cillian McDaid with his four points from frees and Duracell bunny running had as good a pair of legs beside him, it might have tilted the game the other way.

In the heel of the hunt though Galway wouldn’t have been at the races without the massive contribution of Shane Walsh, who unfortunately for maroon supporters, was something of a one man band up front as he landed nine of his side’s scores.

He was sensational in virtually everything he did and had as good a marker as Tom O’Sullivan up a stick for the 70 plus minutes they went head to head.

While it is too simplistic to dub this game the Clifford and Walsh show, in terms of skill and movement and two-footedness, we witnessed two virtuoso performances on either end of the pitch in this July All Ireland.

Seldom has a man played so well and ended up top marksman on the day to still end up in the losers’ dressing-room come the final whistle.

Damien Comer has the potential and was hungry for possession but his runs were largely unfulfilled as players further out were too slow in lifting their heads to try to bring him into the play.

That must be seen as a major self-inflicted wound by Galway themselves for what good is a rose that blooms unseen? Comer managed one magnificent catch and made a score from this contribution but otherwise was largely anonymous simply because he was starved of possession by his own teammates.

The other Galway forward were lively without having a finished product  in their locker and the only one to score other than Walsh, Johnny Heaney, should have scored a goal rather than a deflected point with the big first-half chance that came his way.

He broke through the Kerry defence for one of the few times in the day but was kicking high instead of along the ground with his shot. The trajectory made it easier to block and arguably a defining moment in the game – its only goal – was lost by a player lacking in finishing poise.

Kerry are a different animal this year under O’Connor and that can be gleaned by the fact that they conceded only one goal – to Dublin’s Cormac Costello in the semi-final – this entire championship year. That is some transformation from a side that shipped three goals to Tyrone in last year’s All Ireland semi-final when losing by 3-14 to 0-22 last August) and was seen then as the Achilles heel they perished on.

The decision to play Jason Foley at full-back (who must be complimented for blotting out Comer as well) and Tadhg Morley at centre-back but acting as a doorman on the D to keep out allcomers seeking to get past was key to the transition from nearly men to champions.

These two men were the bulwarks around which Kingdom ’22 set sail and arrived safely into All Ireland port at Croke Park around five o’clock last Sunday. Aside from Heaney’s half-chance, daylight was snuffed out that end of the play, thus allowing the wizardy up front of the Cliffords and the hardwork and aggressive running of Sean O Shea and the vastly improved Stephen O’Brien  to cause all sorts of problems to the Galway rearguard.

Ultimately the game was won and lost on the decision made on the sideline and with O’Connor drawing first blood with his interval changes in bringing on the Spillane brothers; it is on him the accolade of winning manager deserves to rest.

Kerry though will know they are unlikely to embark on a Dublin like reign of two, three, four, five or six in a row with a midfield that was patched together and a forward line that is largely dependent on two or three players. Paul Geaney was below par all season and may call it a day while extra dynamism is needed if they are to defend their title against a better Galway, a rejuvenated Dublin or even a rested Tyrone who like to spend an idle year before seeking to win again as they did three times in the noughties.

All that though is for another day and Kerry folk will glow in the hallmark of seeing a  38th title achieved and  their first since 2014.