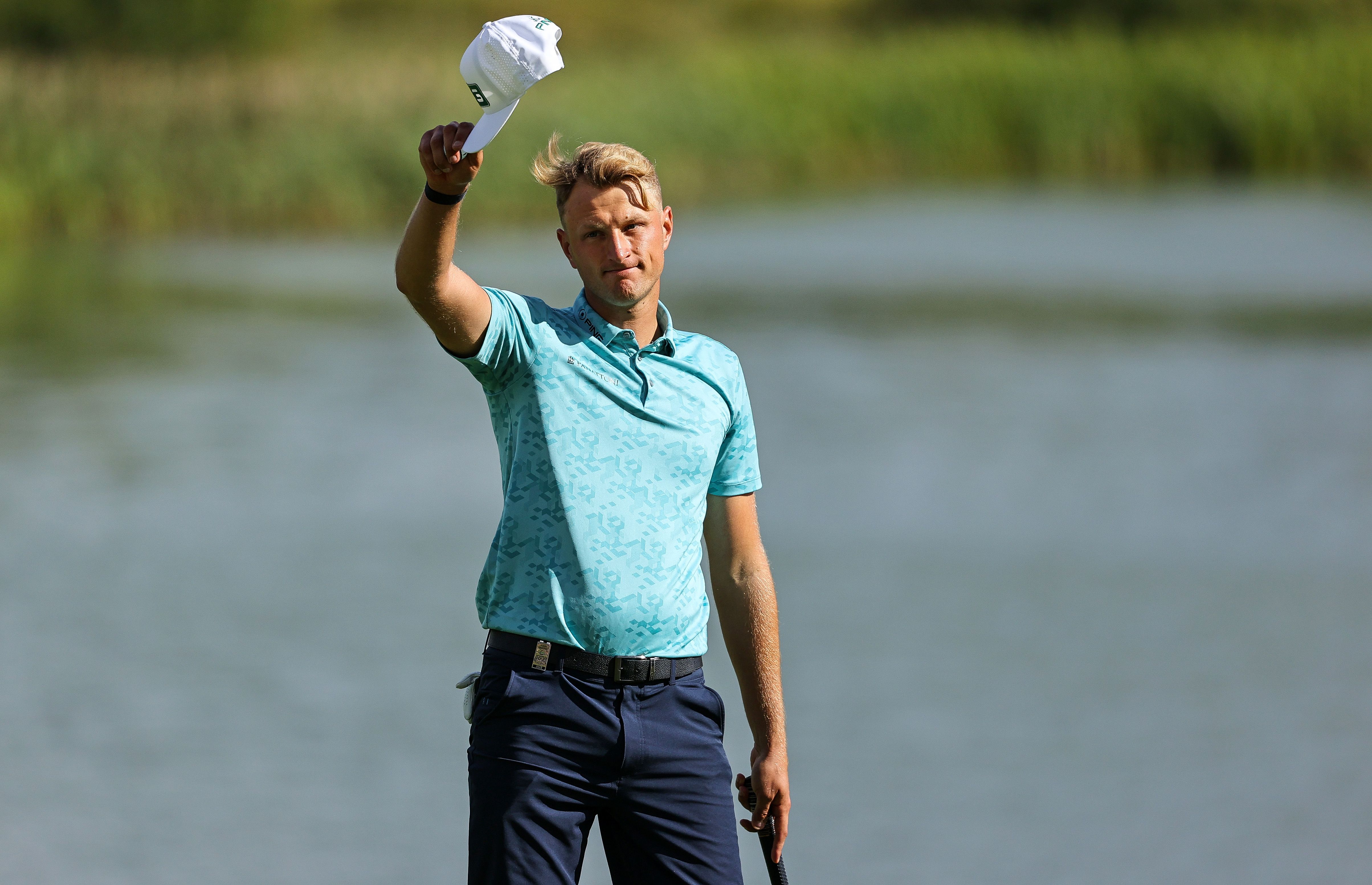 Adrian Meronk acknowledges the crowd after finishing his round on Saturday at the Irish Open, Mount Juliet Estate, Thomastown, Co. Kilkenny. INPHO/BEN BRADY

Adrian Meronk took this year’s Irish Open by three strokes, thereby becoming the first resident of Poland to win on the DP World Tour. Ryan Fox sandwiched rounds of 73 and 70 with 64s to finish sole second.

Shane Lowry was the low Irishman, claiming a slice of ninth place. Seamus Power and Padraig Harrington shared 30th place with five others, while Niall Kearney grabbed a piece of 58th place.

The tall, lanky Meronk arrived at Mount Juliet in County Kilkenny seeking his first DP World Tour win. Six top-6 finishes this year suggested that it could happen here and an opening 67 (bogey free) kept him in touch with Fox, who had the first-round lead. Meronk, 29, rolled another 67 on Friday.

Three bogeys tarnished Meronk’s card on Saturday, but seven birdies helped to stanch the damage. The overnight leader on Saturday, he maintained his advantage with birdies at the second and fourth holes before taking his only backward step at the sixth hole.

The next eight holes saw Meronk take just a stroke off par before putting the tournament away beginning at 15, where he began a birdie-birdie-eagle skein.

“Such a relief, to be honest,” Meronk said after he sealed the victory. “I’ve been a couple times close this year. So, to close it off in Ireland in the Irish Open in such a special event on the schedule, it’s really special for me and I’m very excited.

“To be honest, I had a good feeling about this week. I just focus on my game of stay patient and it finally paid off. I’m super excited of what’s ahead of me.”

Fox squandered his early advantage with a Friday round that resulted in more bogeys (four) than birdies (three). He trailed Meronk by five strokes going into Sunday’s finale and produced a stiff rally beginning at the fourth hole built on seven birdies and an eagle at 17. A closing bogey at 18 left him little to do but wait in the clubhouse to see if Meronk was up to the challenge of playing with a lead. Instead, Fox got his second runner-up finish in this event; he was second to Russell Knox in 2018 at Ballyliffin.

Top-10s were in the offing for the two most recent Irish Open victors. Californian John Catlin, who took the 2020 edition at Galgorm Castle, tied for fourth place, five strokes off Meronk’s winning number. Importantly for Catlin, he snagged one of three British Open spots available (David Law and Fabrizio Zanotti got the others).

“I’m going to soak it up for sure,” Catlin said. “It’s a pretty special place and I can’t wait to play at the Open.”

Lucas Herbert, who won this event last year at Mount Juliet, shared ninth place with Lowry and two others. Just three strokes off the lead teeing off on Sunday, Herbert dug himself a deep hole by going out in 40. An eagle-3 at 10 began a rally that saw him reel off four consecutive birdies beginning at 14. He then bogeyed 18.

Lowry started with 71 on Thursday and went lower each subsequent day, firing rounds of 70, 68 and 67.

“If only the tournament was six rounds,” Lowry said. “I’m happy with my weekend’s work and I can take a lot of confidence from this going forward.”

Power was in the mix through early rounds of 68. Saturday’s 77 saw him plunge well down the leaderboard. Another 68 on Sunday helped his standing. He now looks forward to next week’s British Open.

“That’s a dream come true, playing an Open and playing the Open at St. Andrews, you couldn’t ask for anything more,” Power said. “I really can’t wait.”

Harrington posted rounds of 70, 71, 71 and 69 to finish level with Power. He admitted to fatigue after a grueling stateside slate that yielded a win in the U.S. Senior Open just the week before. Sunday’s round began with birdie at each of the first five holes and he made it to the turn in 30. But the tides turned and a double-bogey 7 at the 10th hole began a back-nine 39.

The Irish Open also represented the professional debut of Alex Fitzpatrick, younger brother of Matthew Fitzpatrick, most recently seen winning the U.S. Open. Alex Fitzpatrick shot rounds of 76 and missed the cut by 10 strokes. His Wake Forest teammate, Mark Power, was also in the tournament; he shot consecutive 72s to miss weekend play by two strokes.

Tom McKibbin shared fifth place in the Italian Challenge Open at Golf Nazionale in Viterbo, Italy. He shot rounds of 71, 69, 65 and 70 to end up at nine strokes under par for the tournament and just two off the low number that resulted in a playoff.

McKibbin actually led at various points during the third round. He worked out a 65 despite three bogeys on the back nine. He moved up to 29th on the Road to Mallorca, just a peg below Ruaidhri McGee, who was in the mix for the first 36 holes before receding over the weekend.

Dermot McElroy continued his fine recent form by finishing joint-second in the PDC Championship at Abridge Golf Club in Romford, England. He strung together rounds of 69, 65 and 68 to finish the event 14 strokes under par and four behind Pavan Sagoo, who closed with rounds of 62 and 63 after opening with 73.

This follows on the heels of another second-place tie three weeks prior and missing a top-10 placing by one stroke at last week’s installment on the Challenge Tour. McElroy needs to finish top-5 on the Europro Circuit to attain full status on the Challenge Tour for 2023. He currently stands eighth; he finished seventh on last year’s Order of Merit.