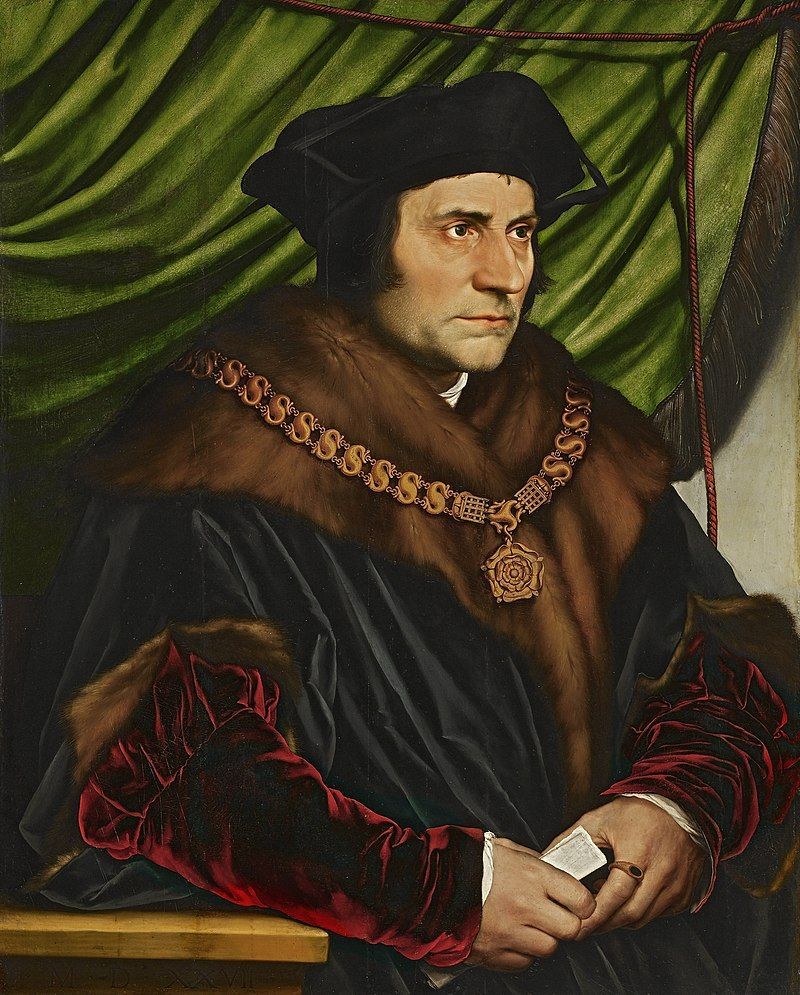 O'SHEA: The Views From Differing Utopias

Sir Thomas More (1478-1535) is remembered mainly because he was beheaded for insisting that his boss, Henry V111, was breaching divine law by claiming leadership of the Catholic Church in England.

Sir Thomas could never approve diminishing the authority of the pope, and, for his bravery and conviction he has been elevated by Rome to sainthood. Ironically, the Anglican Church, responding to the wheel of history, has also canonized him.

His most famous book by far is a novella called "Utopia." One of his contemporaries spoke of him as a man of “marvelous mirth,” and the new word he created for the title of his book certainly suggests a playful mind.

Utopia, based on its derivation from the Greek, has two distinct and contradictory meanings as the “u” letter can convey a good or perfect community, or it can indicate an unreal place that is too good to be true. The jokester author seems to be challenging his readers: take your pick – one or both!

The book imagines an island where the people live in harmony with nature and with each other. Everything there is owned communally and shared, from land to housing to food. This island of dreams conforms to life in Plato’s Republic, where private ownership is also outlawed because he too considered that a community that allowed different levels of wealth is bound to be riven by divisions and jealousy.

This egalitarian ideal also sits well with basic Catholic principles. It affirms that the goods of the world belong to all God’s people, and distribution should be equitably based on their needs, not on the expectations of the greedy, or claims of social importance. In Christian ethics the demands of the common good are always the pre-eminent consideration.

Obviously, this utopian paradise runs counter to the capitalist system which is always tied to private ownership. So this kind of idyllic living plays no part in modern communities except among monastic groups.

In these brotherhoods and sisterhoods, satisfying community needs is prioritized over individual acquisitiveness. They cast a cold eye on the prevailing culture which affirms a different set of values: greed, one-up-man-ship, and cupidity.

For Christians and Jews, Eden is the beautiful garden with an abundance of fruit and greenery where Adam and Eve somehow messed up and were banished from that ideal place. St. Augustine, in the fourth century, blamed Eve for causing the divine expulsion and women have fared poorly in Christian churches ever since.

The coming of a savior, a messiah, is somehow tied to a salvation story that harps back to the misdeeds of the first parents. One way or another the pristine beauty and purity that prevailed in the imaginary garden was lost and can never be recovered.

An enchanting Irish lyric, "Come Back Paddy Reilly to Ballyjamesduff," draws on the Eden imagery and assures listeners that unequalled beauty can be experienced if you travel to County Cavan and “turn to the left at the bridge of Finea and stop when half way to Cootehill.”

You will soon come to this magical paradise, “the grass it is green around Ballyjamesduff, and the blue sky is over it all.” To make everything perfect requires a human touch in the person of a wonderful local man called back from exile, “come home Paddy Reilly to me.”

According to Homer, the legendary Greek author, the idealized Elysian Fields were located in the western edge of the earth. They were also known as the Fortunate Isles, or the Islands of the Blessed “where life is easiest for men. No snow or heavy storm but the ocean sends up blasts of the shrill-blowing west winds that may give cooling to men.”

The Latin poet Virgil describes Elysium in even grander terms. It enjoys perpetual spring and shady groves, with a private sun lit by its own stars. In Paris, the Champs-Elysees still retain the name of the Elysian Fields first applied in the late 16th century.

For Buddhists and Hindus, Nirvana is the ultimate destination for perfect peace where a person may achieve enlightenment. This has no connection with worldly possessions, or natural beauty, but represents a perfect state of quietude, of inner peace. They stress the high value of liberation from attachment and pointless worrying.

A utopian state in this tradition involves realizing the individual’s insignificance in relation to the vast universe. This is a theme also of some Christian mystics who speak about their sense of unimportance in the light of a cosmos going back billions of years and encompassing millions of galaxies.

In 1933 an English writer, James Hilton, introduced us to Shangri-La in his novel "Lost Horizon." This was a Himalayan utopia, an enduringly happy place, an earthly paradise where the people maintain their youth and vibrancy for hundreds of years beyond the normal lifespan.

The Pilgrim Fathers set out from England in the 17th century to build a new world. John Winthrop articulated a model for Puritan perfection in New England. His ideal place was an urban hilltop community, living in peace and harmony, an example to the rest of the world. This wondrous city has three large gates that are always open to those who qualify as “saved,” which limits admission to a relatively small Protestant sect.

Aldous Huxley penned his masterpiece "Brave New World" in the 1930s when various forms of fascism were thriving as democratic governments tried to cope with the mass unemployment during the Great Depression. He described his book as portraying a “negative utopia.” It presented a futuristic World State whose citizens are all engineered into an intelligence-based social hierarchy. He provided a frightening vision of future obedient citizens created in test tubes.

George Orwell, writing a few years later, was greatly influenced by Huxley, and in his famous work, 1984, the protagonist, Winston Smith, re-constructs history at his nine-to-five job at the ominously-named Ministry of Truth. His boss, the ever-present Big Brother, realizes that Winston’s allegiance is problematic. Even thinking of creating a personal journal or, God forbid, falling in love is punishable in this dystopian world by death.

Back to Thomas More, who was asked what he thought of the utopian island he created. He replied diplomatically that he liked some of its laws but not others.

Sadly, he didn’t know about the allures of Ballyjamesduff!