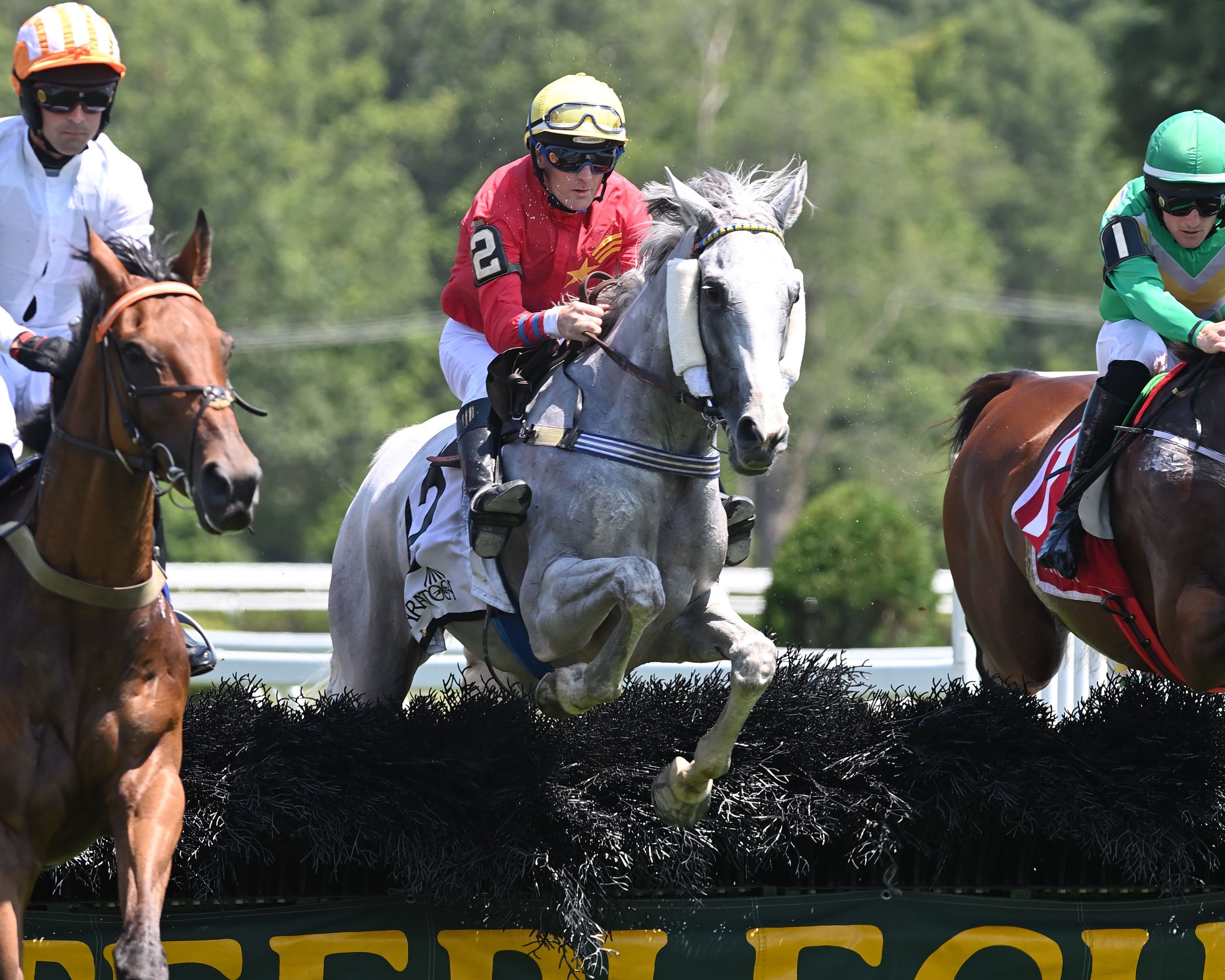 Down Royal, Bernie Dalton in red silks up, clears a hurdle en route to victory in the A.P. Smithwick Memorial Steeplechase at Saratoga. CHELSEA DURAND

Down Royal, an 8-year-old mare toting low weight of 141 pounds, was up in the final strides under Bernie Dalton to win the Grade 1 A.P. Smithwick Memorial Steeplechase at Saratoga last Wednesday. Dalton, an Irish native, not only rides Down Royal (named for the Lisburn racecourse) but bred and co-owns her along with his wife Kate, who is listed as the trainer.

Dalton kept Down Royal off the pace, although she was only about four or five lengths behind the leader during the early stages. She closed the margin around the far turn the second and final time and wore down a rival to claim the major share by a neck. She returned $15.60 to win.

“This [mare] got me my 100th winner as a jockey at Nashville over jumps in America and you can't write that script,” Dalton said. “To come here and win a Grade 1 on a [mare] that you [bred] and have ridden probably 99.9 percent of the time in our eight years, you can't describe the feeling it gives you to accomplish this.”

Since being taken off Lasix last year, Down Royal has won four of six races.

Thursday’s sixth race at Saratoga, a baby maiden special weight sprint on the main track, didn’t have the cachet that the previous day’s Smithwick did but for winning trainer Paul McEntee the occasion represented his first career win at the upstate New York oval. Jeremy’s Jet, which he co-owns with Alyssa Trawitzki, wired five rivals, pulling away in deep stretch to score by nine lengths under Dylan Davis.

“To come and win at Saratoga is what dreams are made of,” McEntee said. “By Street Sense out of a Scat Daddy mare, he’s definitely bred to get further.” He indicated that the August 13 Saratoga Special is a likely landing point for Jeremy’s Jet, already a hardened veteran, with four previous starts in Kentucky. He paid $6.60 to win.

McEntee spent the first 12 years of his life in Ireland until his late father, Phil, Sr., a former Irish apprentice champion, uprooted the family for England to begin a training career. Nephew Jake McEntee is also on the scene in Saratoga, where he overlooks Ken McPeek’s string. The younger McEntee saddled Classic Causeway for his upset victory in the Belmont Derby on the final weekend of the Belmont Park stand.

Declan Carroll’s situation at Woodbine keeps getting better. He rode Rene Hunderup’s Sir for Sure to victory in the Plate Trial Stakes there on Sunday. The Mark Casse-trained 3-year-old gelding sat off the pace, made his move around the far turn and closed strongly to tally by two lengths. He paid $45.70 to win.

“He traveled beautifully throughout the race,” Carroll said. “I was full of confidence going in and I’m happy to get it done for the team. I just bided my time and when I needed to make room, I was able to push out. That’s how racing is sometimes. It gets a little rough but I’m happy to come away with the win.”

Patrick Husbands aboard the second finisher, also trained by Casse, claimed foul for the bumping incident with the winner at the top of the stretch but it was dismissed by the stewards. As for the uptick in his fortunes, Carroll was self-effacing.

“All it has to do with is if you have horsepower, and I’m fortunate to have people backing me and, luckily, I’m coming away with a few winners,” Carroll said.

Less tickled about the Plate Trial was David Moran, who finished sixth aboard the previously undefeated The Minkster. The colt, 3-for-3, all with Moran in the saddle, fought the rider soon after leaving the gate, around the clubhouse turn and into the backside. He finally settled and made a move to engage the leaders in upper stretch but flattened out soon thereafter, likely having sapped his energy tussling with Moran.

The Grade 2 Dance Smartly Stakes was also run at Woodbine on Sunday and was one of several races over the weekend that displayed the Irish breeding industry in a most flattering light. Wakanaka, a 4-year-old filly bred by Jean Brennan and now owned by Team Valor International and Gary Barber, reeled in the pacesetting Fev Rover (bred by Manister House Stud) entering the lane and went on to triumph by two lengths with Rafael Hernandez aboard. Wakanaka, trained by Bill Mott, paid $4.60 to win and set up a $12.20 exacta with Fev Power.

Three-year-old fillies running a mile on the grass were on the menu in Saturday’s Grade 2 San Clemente Stakes at Del Mar. The result was a 1-2-3 finish for Irish-breds (of which there were seven in this field), all of which were saddled by Phil D’Amato. Bellabel, ridden by Umberto Rispoli, raced in midpack in the early stages and got the jump on her deep-closing stablemates, Sixteen Arches and Island of Love, which finished second and third, respectively. Bellabel was two lengths in front at the wire. She paid $8.00 to win and topped an exacta and trifecta that fetched $192.00 and $897.20, respectively.

Bellabel, bred in Ireland by Fergus Cousins, was 1-for-5 for Jessica Harrington in her homeland, breaking her maiden at Naas in her fifth try. She joined D’Amato shortly thereafter and won the Blue Norther Stakes at Santa Anita on January 2. Shelved since then, she didn’t lose a step in her return to the races.

In Saturday's third race, a first-level allowance optional claiming mile on the lawn for fillies and mares, Irish-breds Fearless Girl and Applecross finished 1-2. The winner, which featured the Rispoli/D’Amato connection, was good for $9.60 to win and set up a $138.20 exacta with the 23-1 runner-up.

Later, on that same program, C R K Stable’s Stayincotai, made his U.S. debut a winning one, rallying from far back under Joe Bravo to get up by one-half length for a $39.40 win mutuel in a first-level allowance/optional claiming route on the turf. Unconquerable Keen was denied second place by a nose in a photo and settled for third place. The winner broke his maiden for Natalia Lupini at Gowran Park on April 7 in his second career start and was soon thereafter dispatched to these shores and trainer Peter Eurton. Unconquerable Keen, likewise, is a recent arrival from Ireland, where he won two races from eight starts for Mick Halford. D’Amato now calls his shots.

The two graded stakes races on the turf at Monmouth Park on Saturday went to Irish-breds. Whereas D’Amato wields the strong hand in California grass stakes, that role is assumed by Chad Brown on the east coast. He sent out Adhamo, a 4-year-old colt, to win the Grade 1 United Nations, while Lemista was one-half length the best in the Matchmaker. Adhamo paid $5.60 to win as the favorite and Lemista paid $11.20 to win as the fourth choice. Flavien Prat rode both winners for Brown.

Friday’s first race at Saratoga seemed an unlikely spot to find a Joseph O’Brien runner but there he was, Alexis Zorba, fresh off runner-up performances at Dundalk and Naas. The 2-year-old colt, owned by Peter Brant, likely came over to be transferred to Chad Brown, while still running in O’Brien’s name in this maiden special weight sprint on the grass. Not even John Velazquez could help him do better than finish fourth here as the 13-10 favorite.

To rub salt in the wounds, he was beaten by a trio of Irish-breds, the fleetest of which is trained by Brown. Appraise, the longest shot among seven juveniles, held on under Manuel Franco to score by a head. He paid $24.80 to win and keyed a $126.00 exacta and a $441.48 trifecta on top of Inflation Nation and Wico in that order.