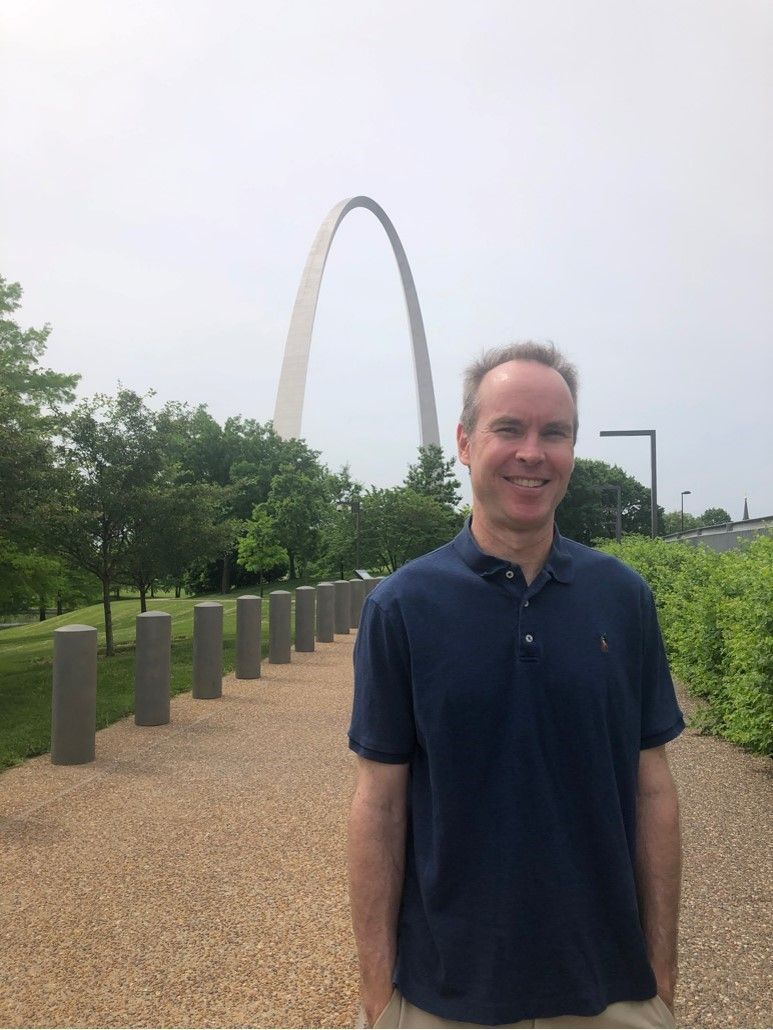 BUAIL LIOM I ST LOUIS: Under the Gateway Arch of St Louis, Kevin Scannell is creating software to help speakers and learners of the irish language

If we allowed ourselves to reminisce and think back on our school days, remembering how we rhymed off our 12 times tables and reeled off our agam, agat, aige, aici, could we have found a way to connect the two?

In St. Louis, Missouri, there’s a professor who is doing just that. Kevin Scannell, Professor of Mathematics and Computer Science, at Saint Louis University, has combined his love of the Irish language with his mathematical background and research in computer programming languages. Scannell uses machine learning to develop computer resources that support speakers of Indigenous and minority languages, especially Irish and other Celtic languages.

While studying math at MIT in his undergraduate years, the Boston native became more interested in linguistics, and Irish in particular, so started to teach himself the language alongside his formal studies in math.

“My learning of the language was purely through just books and anything that I could get my hands on. So, it was for me, for many years, just a purely written language,” says Scannell.

At that stage he had not visited Ireland but identified as Irish and felt connected to the language.

“I always had an interest in the language. My father always told us we were Irish, even though he was born in the States; his parents were born in the States. But we just sort of identified that way. It was very much a question of strong Irish identity and upbringing,” he says.

He studied the language in a mathematical way because that’s what came natural to him.

“It was very natural for me, I used it as sort of a puzzle, right? You're reading a text, and it's very complicated. And you're kind of working out the meanings of things, and it’s sort of my way of thinking."

He chose to learn Irish and he stuck to it: reading, dissecting, understanding, learning. He grasped every opportunity to learn Irish alongside an already heavy academic workload.

“It wasn't until many years later, when I could actually afford to travel and go to Ireland, that I started to learn how to speak it properly, more or less. My spoken Irish is not where I would like it to be, even though my understanding of grammar and the written language is quite good,” he says.

Today, Scannell has a very clear understanding of the language and an unwavering dedication to working across technical platforms to facilitate the language's reach to people of every age, ability, country, and demographic.

“I was participating in mailing lists and email lists, and whatever we had back in the 90s," he explains. "There was no Facebook or Twitter, and so on. But there were still ways that you could interact in the language online and I took all those opportunities."

And yet there was always a hesitation because he did not have the confidence in his Irish language skills and abilities.

“As a learner, I didn't have a lot of confidence. I was nervous about spelling things and putting a séimhiú in the wrong place and so on. So, I used my software development skills to produce some of those very early tools like a spell checker and a grammar checker, initially really just to help myself and to give myself a little more confidence in using the language on the computer.

“When I put some of those up online, they were enthusiastically received because there weren't really resources like that in the early 2000s. It’s just taken off from there and sort of turned into a full-time job over the last 15 years or so — I don't even do mathematics anymore,” he says.

Scannell has put many other Irish language learning resources online for free at cadhan.com. Input a sentence as Gaeilge on this site, and it’ll help with spelling and grammar. This website is a one-stop-shop for all the Irish language resources he’s been working on and includes tools in other Celtic languages including Manx and Scot’s Gaelic:

Scannell's work under the Gateway Arch of St Louis is being complemented by other academic teams in Ireland. Trinity College Dublin has developed abair.ie focusing on dialects and Dublin City University is doing groundbreaking work around English to Irish translation.

If you get your Firefox browser or Gmail as Gaeilge, then you’ll find Scannell and his team has been behind that.

“Together with a team of people in Ireland, we've translated a whole bunch of different websites and software packages and so on so that you can use things directly in Irish. The Firefox web browser was really the first big one in 2003. Gmail was the other really big, well-known example” he says.

For Firefox and Gmail what that means is that the menu choices and buttons are in Irish.

“I developed a way to connect Irish speakers with each other on Twitter. But that same approach was easily generalized to lots of other languages as well. I just would add to the website gradually, and there are now over 100 languages on the website. Some of them have pretty big presences on Twitter, like Irish, where there's something like 15,000 users, and we're coming up on five million tweets in Irish,” he says.

Some languages have only two or three people who only occasionally connect with each other, but Scannell still feels it is hugely important to offer those speakers a platform to connect.

“It could be people like me, who are geographically separated from the kind of homeland, the áit dhúchais. And social is one of the advantages of social media. There's lots of disadvantages too but one of the things that it does well is that it goes across those geographical boundaries and lets people reconnect with other speakers,” he says.

“I was happy to be the person, the friend in the court, so to speak, and be an advocate on the inside and tell them, yes, you should be supporting all of these other languages in ways that you're not. And in fact, I think that's one of the reasons that we have Twitter now available in Irish also,” says Scannell.

Awarded a Fulbright in 2019, Scannell went to Carna in Co. Galway and worked with researchers at Acadamh na hOllscolaíochta Gaeilge. Unfortunately, his visit coincided with the first Covid lockdown and he spent much of his time in lockdown.

As a professor who teaches computer science, Scannell encourages his students by describing software development and programming languages as a kind of “superpower.”

“If you’ve a really good idea, as a developer, you can create a computer program, and then put out a website. And then if it takes off, you might have thousands or millions of people that are willing to use it. I've also described speaking Irish as a superpower in the sense that it unlocks the whole history of Ireland. I thought I had all this knowledge of Irish history and politics when I was younger and growing up, but it's not until I really learned the language properly that I really unlocked a lot of that history: everything that's encoded in the place names and geography and so on. Without a really rich knowledge of the language that's all kind of hidden away."