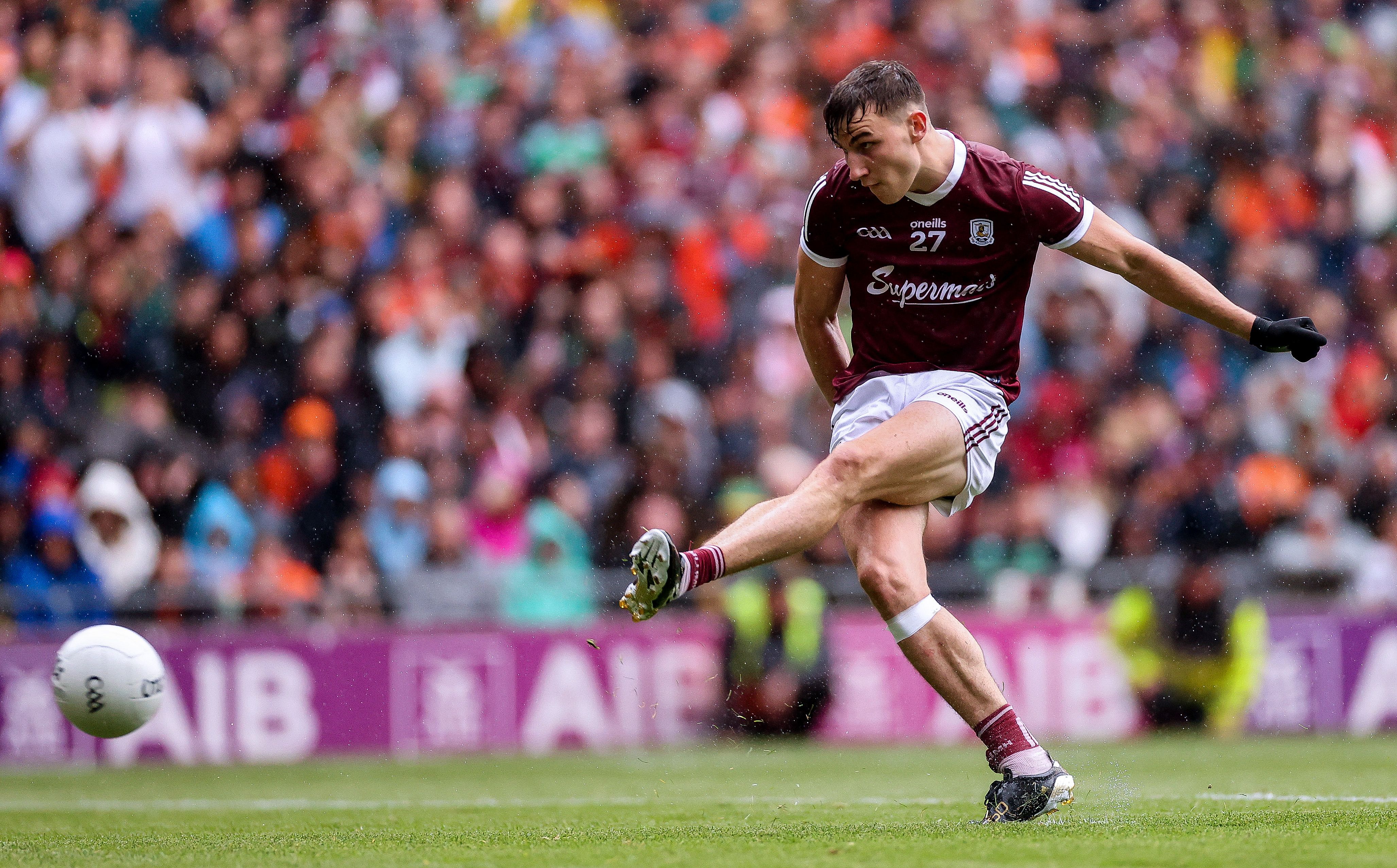 Westmeath was the fancied team in this senior clash, and the pundits seemed to have been right up to the last kick and moments of the game. Then Sligo triumphed by scoring a penalty, that some thought was dubious, or at least very harsh, with the last kick of the game.

Though the game was rather mediocre, it generated a few talking points that kept the small crowd keenly interested as the scorching temperatures began to subside. Meanwhile Sligo started well and had the ball in the net in the opening play as big Johnny Glynn was on hand to punch a well-timed cross to the net. Then Westmeath came very close to striking a major as a five-man field-sweeping movement ended with Killian Butler striking the outside of the net.

Glynn continued to make his presence felt as he fielded a long ball from Patrick Moriarity for a mark, and then a point. Dan O’Sullivan got Westmeath’s opening score, a point, and they were unlucky not to draw level as Daragh Carbury saw a powerful shot rebound from the crossbar and be cleared.

Sligo were winning the possession stakes, but their GPS failed to accurately locate target man Glynn, hence they wasted several scoring chances. Phelim Finnegan soloed straight through from a kickout to land a fine point, and Eric Monahan pointed at the other end to leave a goal between the sides at the first water-break.

After hydration Jeff Farrell entered and the big man had a big impact, he scored a goal. Sligo hit back with two points, courtesy of Dylan Rooney and Danny Corridan, but the Yeats County then lost their chief target man with an eye injury. Westmeath always looked dangerous on the counter-attack, but keeper Cadden saved superbly from Finnegan. Just before the intermission Ruairi O’Caoleain goaled, after Monahan set up the opportunity.

After the break Jeff Farrell attempted a shot for a point, and both umpires waved it wide. However a veteran Westmeath official strategically seated a few yards from the post, and casting an unopproving glance, appeared to get the umpires to reevaluate their decision. It was then flagged a point. However the Westmeath official was soon summarily dispatched from his preferential spot to a more neutral position with less potential for obtrusiveness by a justifiably irate Sligo official.

Both sides exchanged scores, Monahan and Butler, with pointed frees. Then color became the central topic, should it be black or yellow, but of course that seemed to depend on which team you were supporting. Thankfully the referee had the final decision on that.  Sligo then had a short scoring spree to hit three points in a row, leaving them leading by double scores, 2-8 to 1-4, entering the last quarter. That would soon change as Westmeath appeared to have kept the good wine for the last stanza. Butler began the revival with a point from a free and Luke Kelly quickly followed with another.

Then an uncharacteristic error by Cadden saw a Butler effort dribble over the line for a major, and Westmeath were all fired up as they were just two points down and Sligo appeared to be in disarray and a spent force. Another Westmeath attack, which left bodies sprawled on both sides ended with Luke Kelly blasting the ball to the net, and the lead for the first time. Then it looked as if cream was being added to the victory cake as Kelly and Butler belted over a brace of points. Cadden came up to land a “45”, but there was still two points in it when Sligo were awarded a close in free as Westmeath packed the goal-mouth. Then just before the buzzer sound, a Westmeath player was adjudged to have committed a physical infringement in the penalty area. Eric Monahan blasted the ball to the net, much to the joy of Sligo, and of course to the dismay of Westmeath.

Rangers retained their under-20 title in 90 degree temperatures on Sunday. They were the better team for most of the hour and were capably led by Emmett Loughrane, center forward, top scorer and man of the match. It was far from a one man show as he had a great supporting cast in Mulvihill, McElligott, Grace, Walsh, McKenna, Ryan and company. Though Shane Brosnan got the opening score, Rangers soon stamped their authority on proceedings as Loughrane goaled to culminate a sequence of good passes from Conor Crosby and Conor McCormack. Goal number two soon arrived as Asthon Walsh set up Shay McElligott for the major.

Then Joey Grace displayed his fine placed-ball skills as the game seemed to be getting away from the combo squad. Tiernan McLoughlin halted Rangers momentum with a point and Ian Kavanagh followed with another.  When play switched to the other end a good pass from Chris Kennedy set up chief scorer Loughnane for a minor.  Then came a major strike at the other end, Tiernan McLoughlin, the team’s best player, fielded well before sending a sizzler to the net leaving the score at 2-2 to 1-3 with ten minutes left in the period.

Once again Rangers showed their authority and considerable skill as they put four unanswered points on the board, courtesy of Grace(2), Loughrane and McElligott, while their opponents just had a black card for their efforts, leaving the score 2-6 to 1-3 at the break. Upon resumption Loughnane continue to add to his tally and Owen Cole struck a fine long range effort on the other side. Both scores were prefaced with discussion/dissension about the color of cards issued. McLoughlin tagged on another point for his team, but the Rangers continued to attack and might have been further ahead, but the post came to the rescue, plus the ball was cleared off the line as well.

Still it was 2-8 to 1-5 at the last water break. In the last quarter Celtics/St. Barnabas seemed to rally as some penetrating runs from Shane Brosnan set up McLoughlin for a brace. The deficit might have been reduced further but a bone fide goal chance was sent horribly wide. Then it was back to the Ranger playbook as Mike Ryan set up Loughrane for his second goal. Rangers kept the pressure on as Ashton Walsh capped off a fine performance with a point. The combo squad had the last few scores, a goal from their best and most productive player Tiernan McLoughlin, and Sean Considine coolly sent over a “45”, but at that stage Rangers were eyeing the victory podium. Overall a great team performance, with good supply channels, and of course a bit too much firepower up front for the over-worked opponents to curtail.

Way too easy for Clare

The score line tells the story in this senior hurling clash as Tipp were no match for this awesome Clare squad. Not alone is this a very powerful team, but it is supported by a very sizeable and strong bench. Right now they are in pole position for championship honors. In the first two minutes Clare had 1-1 on the board, the point from Trevor Fallon and the goal from Aidan Kennedy. Then Joey Grace, a fine dual sports athlete, tapped over two points for Tipp. By the first water break it was 1-6 to 0-3 as Cathal Darcey, Aidan Kennedy, Seanie Dilger, Tadgh Connellan and Sean Collins were all on target, while Grace had Tipp’s third point. The game was well and truly over as a contest by half time, the score being 4-14 to 0-3, as Kennedy banged in two goals and Connellan had other while points rained over from Darcy, O’Carroll, Connellan, Brady, Barry and Ryan.  Thankfully common sense prevailed in the second half and the clock-man had the proverbial blinder as minutes just flew off the clock. Tempus fugit definitely.