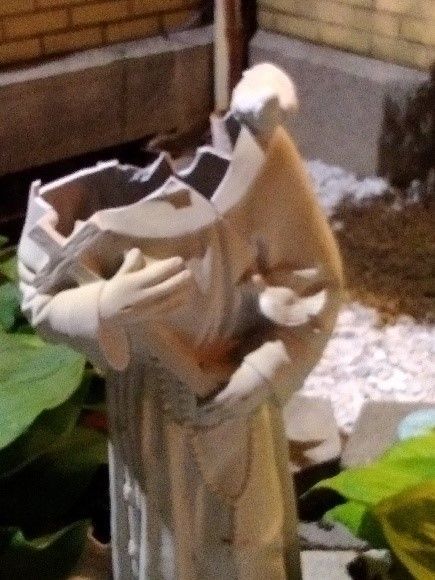 One of the broken statues

The Buffalo Police Department is investigating what the Ancient Order of Hibernians is calling "a brazen crime of disrespect and hate" in which four religious statues were desecrated at the outdoor grotto of St. Margaret Catholic Church, located at 1395 Hertel Avenue in what is New York State's second largest city.

Said a Hibernian statement: "The perpetrator (s) knocked down four religious statues, decapitated their heads and proceeded to smash the heads of the statues with a sledgehammer."

New York State Ancient Order of Hibernians Catholic Action Chairperson James Russell said: “When is enough, enough? Yet, again our churches have been desecrated. Why is this incident not being considered a hate crime? Again, we encourage in the strongest terms possible that if you see something that isn’t right, say something!”

The attack on the church is but the latest in a series of such incidents in recent months. most recently a church in Brooklyn suffered an attack.

Anyone who may have information that can help police with their investigation is asked to call the Buffalo D District detectives at (716)851-5857.