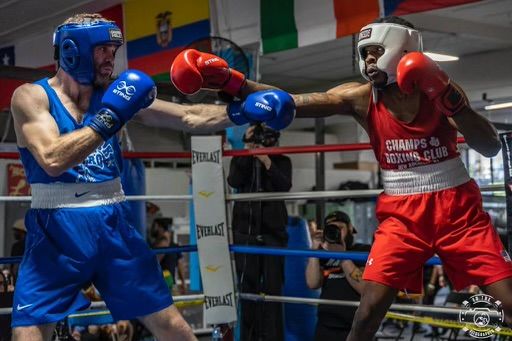 In 2019, Glynn, representing the New York Athletic Club, won the novice heavyweight belt in the inaugural Ring Masters competition, the successor of the famed New York Golden Gloves amateur boxing tournament. The 32-year-old, who emigrated to New York in 2013 and took up boxing in 2018, returns to the Ring Masters as a cruiserweight following two Covid-necessitated cancellations.

Standing between the 12-2 Glynn, an unattached fighter now, and a second Ring Masters belt is Matthew Pagan of the Morris Park BC in the Bronx.

They had a common opponent in their respective runs to the finals in the awkward, southpaw Jawanda Taylor. Glynn dropped a decision to Taylor, from New Rochelle’s Champs BC,  in the first round but then defeated him in the semi-finals of the double elimination competition at John’s Gym in the Bronx to reach the final.

“He had a really awkward style, but he was also in good shape. I had to figure him out,” said Glynn

“He’s an orthodox boxer,” Glynn said of Pagan. “He must be pretty good to beat Taylor. Taylor is a good fighter.”

Glynn makes his second Ring Masters final appearance after besting Jimmy Diamond of the Freepoint PAL for the 2019 novice heavyweight title. The 6-foot-three Woodlawn, Bronx, resident won two fights and had one walkover on his way to that final.

He had three fights after defeating Diamond before the Covid pandemic shut down the world and fought just once in the run-in to the 2022 Ring Masters tournament. That was against super heavyweight Jonathan Velasquez on a FDNY show on Long Island.

With the NYAC boxing program out of commission, Glynn -- under the tutelage of trainers EJ Burke and Mike Fulham -- had to train in a boiler room in Manhattan while sparring at Trinity Gym in the financial district.

The two men had the crowd on its feet for most of the exciting brawl. Martins was quicker to the draw, mostly beating Browne to the punch in a very entertaining fight. Both fighters smoothly changed from orthodox to southpaw throughout looking for new angles. The fight turned into a bloody brawl in the middle rounds as a clash of heads caused a cut under the left eye of Browne, and a later clash of heads caused a cut over the right eye of Martins.

When the decision was announced, it was Martins stiff jab, effective punches and “be first” mentality that would earn him the unanimous decision by scores of 78-73 [twice] and 80-71. Browne’s ledger dropped to 5-2 while Martins improved to 14-1 with 11 KOs.

USA BOXING VS. IRELAND
A youthful but strong Rathfriland ABC team from Co. Down with one All Ireland champion, three Ulster titlists and Antrim’s best 125-pounder, takes on a USA Metro side at John’s Gym in the Bronx on June 26.

Led by Bobby Lavery and two other coaches, the Irish side comprises:

Yaqub Kahlifa, who’s 15 and an Irish finalist at 119 pounds; and

Tickets are $25 and the first bout is at 2 p.m. John’s Gym is located at 2323 Haviland Ave, Bronx 10462. The Irish team’s visit is partly sponsored by New York-based construction company Navillus.