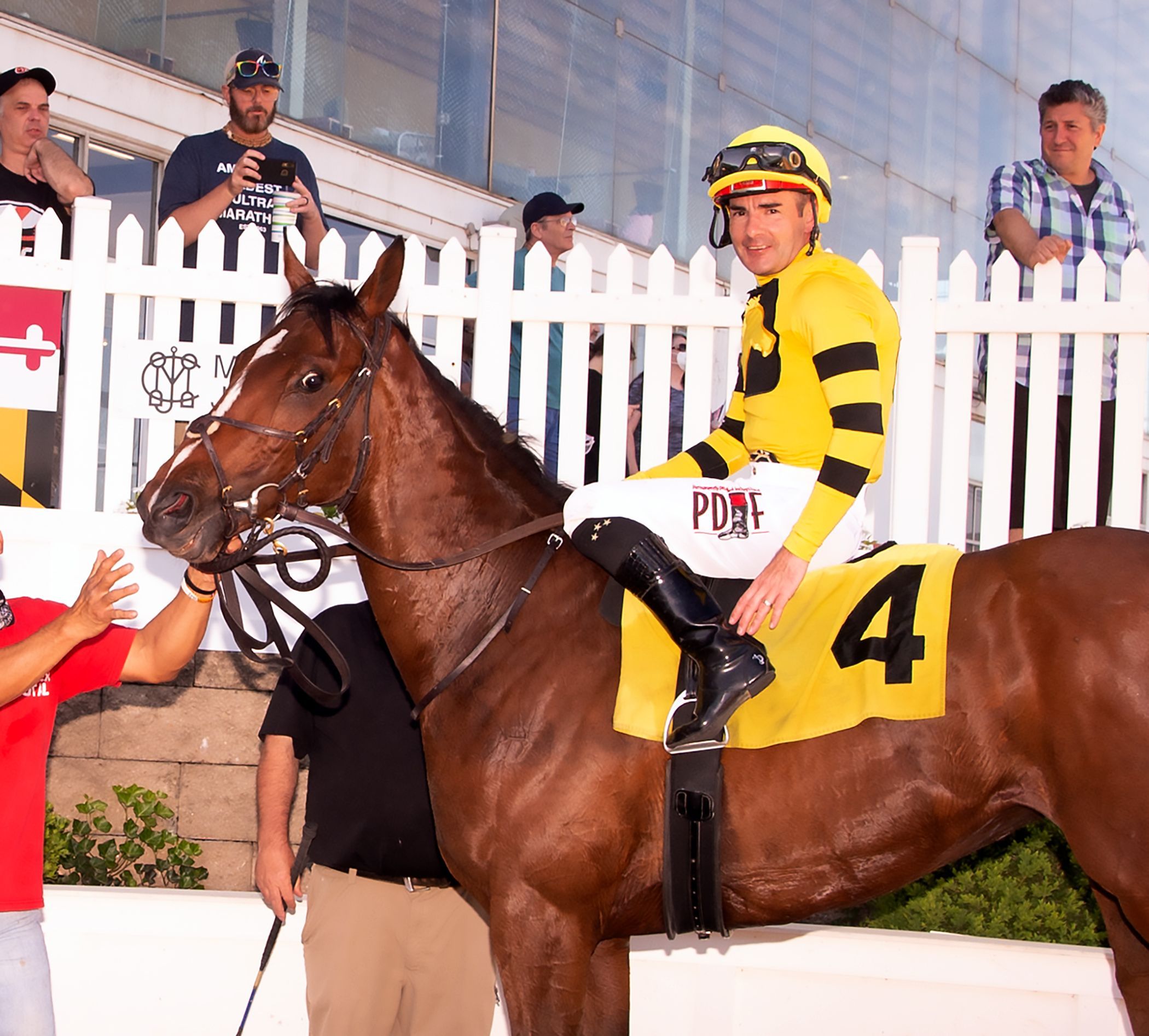 Fergal Lynch aboard Irish-bred Belle Belisa in the Laurel winner's circle on Sunday, after his third victory of the afternoon. JIM MCCUE

Until his victory in the Toboggan at Aqueduct in February, Drafted hadn’t won a race in nearly three years. Now it’s June, and the David Duggan trainee has won three of four starts in 2022, having taken the Mr. Prospector at Monmouth Park on Saturday.

The 8-year-old gelding trailed the field early in this six-furlong sprint over a fast main track, leading to some anxious moments for Duggan.

“He has his running style and you can’t change it,” Duggan said about Drafted’s propensity for closing into the speed. “I was kicking myself after the opening quarter. I said, ‘We have no chance.’ It looked like he was taking the dirt and climbing a little bit.”

Monmouth is known as a speed-favoring surface but that didn’t help the pacesetters as they used each other up. Luis Rodriguez kept after Drafted and they rallied wide into the stretch, reaching the front inside the sixteenth pole and hitting the wire three-quarters of a length clear of the second finisher.

John Haran pulled off a pair of doubles last week and might have made for three if not for a cancellation. Maybe it was the bump while racing between rivals that stirred Manuelito to win Wednesday’s fifth race at Horseshoe Indianapolis. After all, the 4-year-old gelding had been the runner-up eight times after breaking his maiden at this oval in October 2020. But this time he got the brass ring, denying the odds-on favorite by a head. Joshua Morales rode the $43.60 winner in this first-level allowance sprint for Indy-breds.

Thirty minutes later, a return to bottom-basement maiden claimers was just what Haran’s Wicked Justice needed to break her maiden in career start number 10. She was always involved in this sprint under Chel-C Bailey and reached the wire in front by almost three lengths. She paid $14.80 to win and completed a $286.80 Haran double.

Haran came right back on Thursday and got the lion’s share in Indy’s first race, a nickel claiming sprint for statebreds with only one career victory. His Royal to Be, a
4-year-old filly, didn’t have the best of racing luck early on, including a poor start and lacking running room around the turn, but Bailey kept her cool and got the filly home in front by two lengths. Royal to Be paid $4.20 to win as the heavy favorite.

Haran had an entrant in Thursday’s ninth race there but the card was scuttled after the third race when a storm front blew into the area.

Haran then hit the Chicago area, winning two races at Hawthorne on Saturday. His Alpine Ghost, a 4-year-old gelding, whisked Bailey to a frontrunning score by two lengths over sprinters at the $20,000 claiming plateau. He paid $12.40 to win.

The sixth race at Hawthorne, a grass mile at the $15,000 claiming station, found Bailey on the lead again, this time on River Finn. The 5-year-old gelding tallied by a length and returned $10.60 in the win slot.

Brendan Galvin entered the Sunday program at Golden Gate Fields with two wins on the year. By day’s end, he’d doubled that production with a pair of Four Quarters Corp. homebreds. Stateforest, a 5-year-old mare, led her rivals in this main track mile at the $6,250 claiming level the whole way, clearing by just under two lengths at the wire. Pedro Terrero had the seat on the $9.20 winner, which was claimed out of this race.

Galvin was back half an hour later with Premiumonsaturday in another mile on the main track, this time written for $12,500 claimers with just one career win. Catalino Martinez kept the 4-year-old filly in midpack early on, advanced upon the leaders around the far turn and gutted out the victory by nearly three lengths. She returned $14.60 to win. The Galvin double came back $52.00.

Kieron Magee was the closer over the weekend, winning nightcaps at Delaware Park on Saturday and Laurel on Sunday. He claimed Mutakaamil at Delaware last fall out of the now-6-year-old horse’s maiden breaker for client Gokmen Kaya. Saturday’s eighth race there was a starter/optional claiming sprint, which resulted in a two-length triumph for the Magee runner. Jose Rodriguez rode the $6.20 winner.

At Laurel, Magee won off the claim with Al Brown, a 4-year-old gelding that he took on his own behalf in late April for $8,000. He dropped him to a nickel here and was rewarded with the victory by nearly five lengths with C.E. Lopez in the saddle. The $5.60 winner went unclaimed.

A seven-length win from a 2-year-old first-time starter will stir the imagination. Cathal Lynch has just such a prospect in Sansa Ariel, winner of Delaware Park’s eighth race, a maiden special weight sprint on the main track, on Wednesday. The filly, owned by MN2 Racing, was sent to the front by Jorge Ruiz right out of the gate and never looked back. She returned $5.60 to win. The $24,000 winner’s purse puts her well on the way to earning back her $50,000 purchase price at the Ocala sale in April.

The victory margin doesn’t necessarily have to be seven lengths, though. Charles Biggs’ Wild Army Brat, another 2-year-old lass that Lynch picked up in Ocala for $47,000, put four lengths’ separation between her and the nearest pursuer in Parx’s third race last Tuesday. Angel Suarez had the seat on the “Brat,” which fetched $4.80 to win at the windows in her racing debut.

The other Lynch family representative won with all three of his mounts at Laurel on Sunday. Fergal brought in the first of those in the third race, when he rallied Transit to victory by a length in a maiden claiming turf route for a $6.80 win mutuel. The sixth race, an allowance sprint on the grass, saw him close to get up by a length on Spun Glass for a $13.60 payoff. He closed out his skein in the eighth race, an allowance mile on the sod, when he scored by six lengths on Belle Belisa. The Irish-bred filly returned $5.00 to win.

The $16,000 that Michelle Nevin spent to claim Scott Alaia last December at Aqueduct continues to have been money well spent. The 4-year-old filly has appeared under silks on four occasions for Nevin, yielding two wins, and two other in-the-money finishes. On Friday, she led the field every step of the seven furlongs over a muddy surface in Belmont Park’s third race, a claiming event at the $25,000 tier limited to two-time winners. Luis Saez kept after her the entire race, resulting in a one-length margin of victory and a $9.00 win mutuel. Nevin, Winfield Racing and Horse Shoe Farm own Scott Alaia, which was not haltered out of this race.