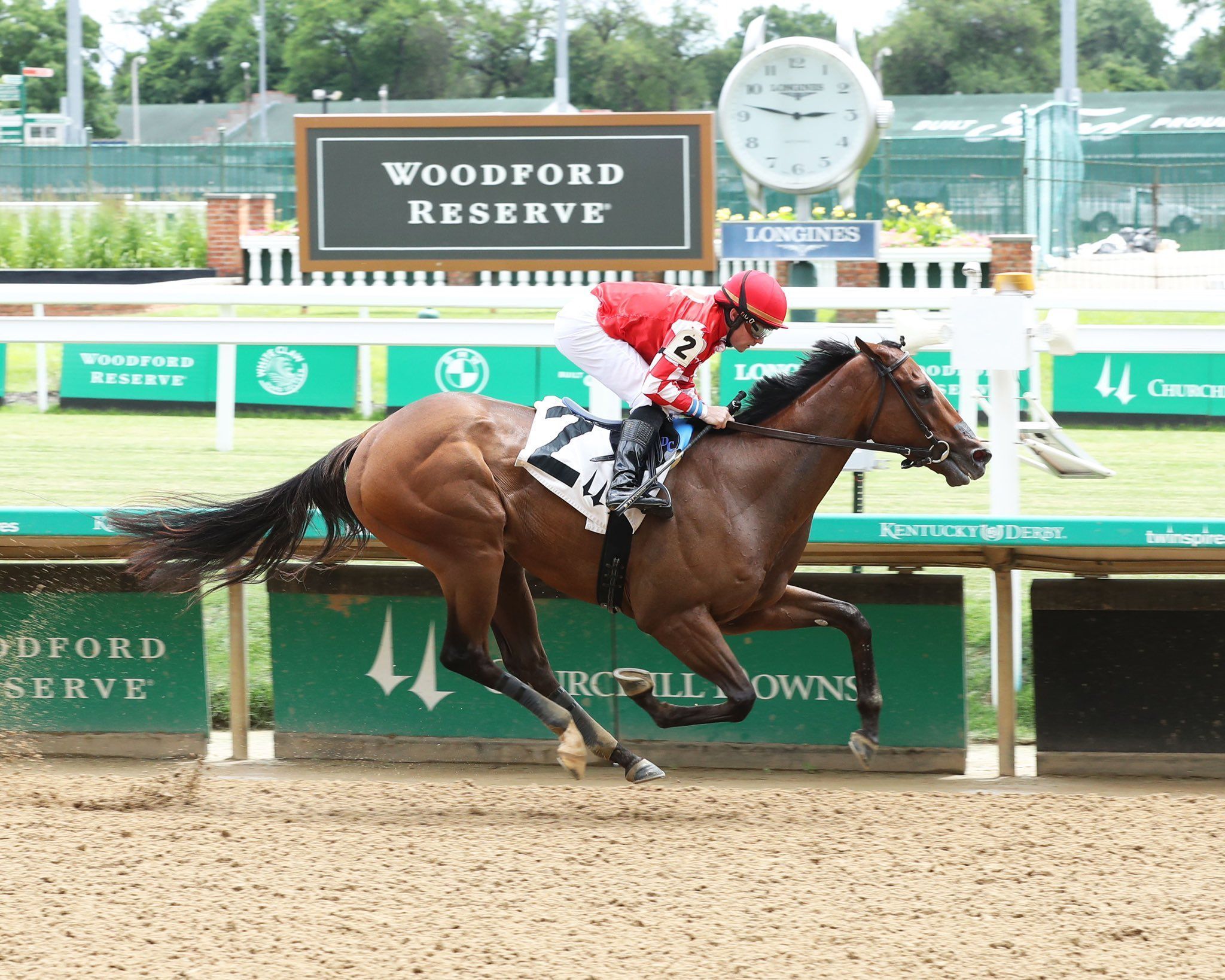 The hazards of raceriding are driven home by the sight of the ambulance that trails the field every time they leave the starting gate. There have been some gruesome stories over the last year but the worst was averted and happy endings seem to be in the offing.

Declan Cannon returned to jockeying this past winter after going down in a spill last September that left him with three fractured vertebrae. Limited opportunities in a hypercompetitive jockey colony in Kentucky had him “sporting” an 0-for-41 mark going into Saturday’s third race, a maiden special weight sprint on the main track, at Churchill Downs.

Cannon, originally from Drumshanbo, Co. Leitrim, rid himself of that goose egg by piloting Top of the Charts to a nearly three-length victory in wire-to-wire fashion. The 3-year-old colt, a first-time starter trained by Brian Lynch, paid $17.20.

As bad as Cannon’s injuries were, they were nowhere near as horrific as those suffered by Vince Halliday after he went down in a spill at Delaware Park last July. The native of Antrim Town had to be intubated after brain bleeds and multiple fractures left him unable to breathe unassisted. Getting out of bed and walking was, itself, a huge triumph.

Halliday isn’t back to the races yet but he’s amazed many by getting on horseback at a training center in Middletown, Del. recently. He mounted a barn pony to guide a fractious filly through her paces during training hours. His goal is to reappear in silks sometime during the summer.

Sometimes the ending isn’t all that pleasant. Charlie Tohill was a Belfast native who came to America to ply his trade, becoming a fixture at tracks in the Pacific Northwest in the 1970s. His career came to an end in 1981 when a spill left him with severe head injuries. He recovered enough to cheat death for a decade until he expired in 1994 after several years in a convalescent home. That didn’t stop his son, Ken, from following in his father’s bootsteps, however.

Ken Tohill recently became the 79th jockey to reach 4,000 career wins, which he achieved at Prairie Meadows in Iowa. He rode his first race in 1979 and spent the first phase of his career chasing Russell Baze on the northern California circuit. A move to New Mexico proved fortuitous and has accounted for the bulk of those 4,000 wins. This year has seen him on horseback at Oaklawn Park in Arkansas, Fonner Park in Nebraska and, now, Prairie Meadows.

David Moran hasn’t any harrowing tales to tell of near-death experiences from raceriding and hopes to keep it that way. Instead, he can boast of having guided Artie’s Storm to the 4-year-old gelding’s third straight stakes score in Sunday’s Grade 2 Eclipse Stakes at Woodbine.

Moran rated Artie’s Storm off a mild pace in this main track route race, got his mount into contention rounding for home and needed little encouragement to get the gelding to complete the job. That’s the fifth career victory for Artie’s Storm, owned and trained by Paul Buttigieg, from 11 starts. Moran has been aboard for all 11 races. The win yielded a $17.10 mutuel payout.

“This horse has been training lights out,” Moran said of Artie’s Storm. “The only thing we were worried about was first run, two turns off the shelf, against these kind of horses. We didn’t really get a prep for him but his breezes have been amazing.”

Brendan Walsh maintains a hot hand at Churchill Downs. He sent out Temple City Terror, owned by Pocket Aces Racing, to win the Keertana Overnight Stakes at
12 furlongs on the lawn on Saturday. The 6-year-old mare persevered through a long drive to get up by one-half length under Adam Beschizza and return $7.60 in the win slot.

On Sunday, John Halley and Ciara Hogan’s Flirting Bridge made her American debut for Walsh a winning one. The 4-year-old Irish-bred filly, ridden by Julien Leparoux, trailed all nine rivals early in this mile and one-sixteenth first-level allowance tilt on the grass but switched into overdrive once pointed for home in the lane and drew off to win by five lengths. She paid $9.60 to win. She previously ran under the tutelage of Henry De Bromhead in Ireland, making little impact in Group races there in 2021.

The year 2022 is shaping up as a highwater mark in David Duggan’s training career. He’s won a couple graded stakes in New York with Drafted and might be looking to make some noise in Penn-bred stakes with Kingsport Farm’s King Kumbalay. The 4-year-old gelding was a solid victor in a second-level open allowance/optional claiming route at Parx last Tuesday. Luis Rodriguez got him to the wire in front by two lengths for his third victory in his last four starts. He paid $6.00 to win.