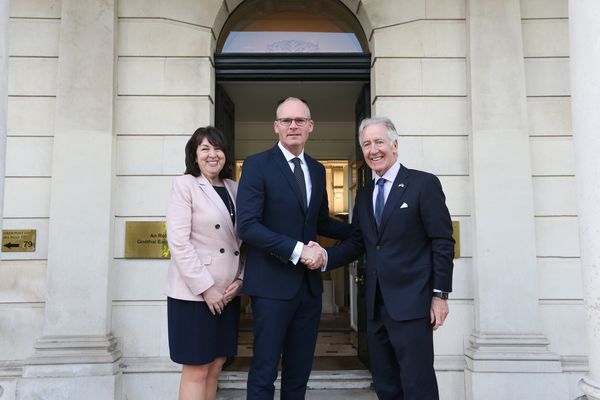 A Bipartisan Condemnation of British Moves

Congress is united on one thing: British moves to change the Northern Ireland Protocol are not a positive thing in this troubled world.

In a joint statement, Congressman Bill Keating, Chairman of the Foreign Affairs Subcommittee on Europe; Congressman Richard E. Neal, Chairman of the Ways and Means Committee and Co-Chair of the Friends of Ireland Caucus, Congressman Brendan Boyle, Co-Chair of the Congressional EU Caucus, and Congressman Brian Fitzpatrick, Ranking Member of the Foreign Affairs Subcommittee on Europe, have issued a joint statement in response to the release of the legislation by the British government that they say undermines the Northern Ireland Protocol.

Said the four in a statement: “The introduction of legislation in the United Kingdom undermines the Northern Ireland Protocol, threatens international law, and, most concerningly, could jeopardize the almost twenty-five years of peace established by the Good Friday Agreement.

"The Protocol is a negotiated solution ratified by UK lawmakers and signed by Boris Johnson to ensure an open border on the island of Ireland and to protect peace and security following Brexit. We encourage the UK and EU to continue negotiations in good faith to achieve durable solutions to post-Brexit trade challenges.

“As members of the United States Congress, we remain committed to protecting and upholding the important legacy of the Good Friday Agreement. We have and will continue to signal to the United Kingdom our support for a negotiated outcome with the EU. The people of Northern Ireland are counting on their elected officials to govern and maintain peace and stability in the region—now is the time to deliver.”

Separately, Congressman Neal said in a statement of his own: “I continue to urge the U.K. and the EU to find joint, negotiated solutions to post-Brexit trading arrangements.

"We must cooperate and stay united in rebuilding our global economy in the wake of the pandemic and in supporting the Ukrainian people through Russia’s unprovoked war. The U.S. remains a guarantor of the historic Good Friday Agreement and peace on the island of Ireland, which all parties must protect, and build on for future generations.”

And Congressman Boyle in a statement of his own said: “The legislation on the NI Protocol that the British government is introducing today clearly violates international law. Just last month the people of Northern Ireland held its Assembly election. Almost 60% of those elected support the Protocol. The people of Northern Ireland have spoken loud and clear. The British government needs to listen to them.

“With war raging on European soil, this is a time in which the western Allies must stand completely united. Thus I urge the British government to cease its divisive actions on the Protocol and work constructively with its Allies to resolve the issue.”
--