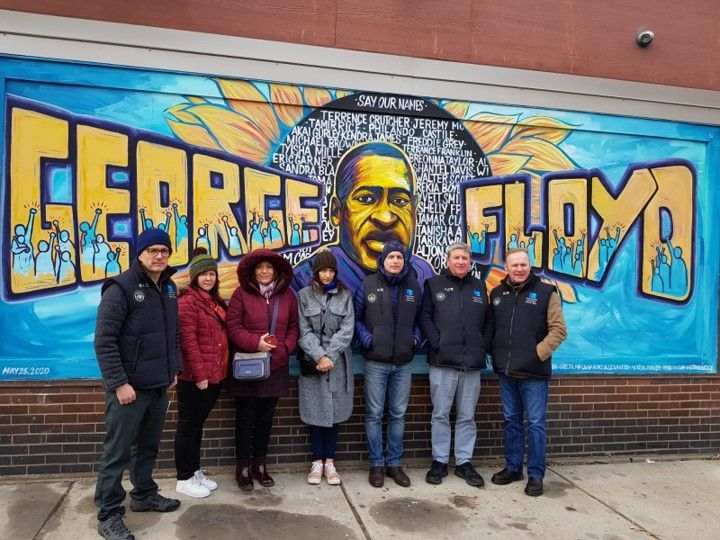 While we normally reserve Saint Paul’s twin city status with that of Minneapolis, on this occasion the Celtic Junction twinned with Armagh’s Aonach Mhaca to bring knowledge, friendship, and fun to their inaugural Deireadh Seachtaine na Gaeilge.

“The impetus has been there for a long time,” she says. “We've been dancing with this love of the language for some time and to really bring it to fruition in a dedicated three-day intensive weekend,” she says.

Very passionate and extremely knowledgeable about the surrounding history of the area, O’Shea digs a little deeper into the Irish language and its connections.

“It started really with the fur traders, and into the logging camps, which were mostly Irish, into the early cities and soldiers — a lot of them were Irish as well. Saint Paul is really considered an Irish founded city,” she continues.

"While not a lot of documentation exists about when and where the language was used, we know it was spoken in the logging camps. And we also know that it came over with the Famine."

An Irish language learner herself, O’Shea speaks with conviction of the Irish language: “It's so incredible to look what's happened to this beautiful, powerful ancient language, and to think how precious it is with its description of the land; its poetry; its songs; its place names.”

O’Shea and the Celtic Junction Arts Center not only honor the Irish language but actively acknowledge and celebrate the history of the many different peoples, immigrants, and communities that once lived in those lands and the languages that they used.

“We are working and living on Dakota and Anishinaabe land. And part of our work is to take that forward," she says. "Land acknowledgment is one small part of supporting Indigenous communities. There is an incredible interweaving of Irish and Ojibwe here in Minnesota and Wisconsin.” Celtic Junction have celebrated and examined the cultural connections between the two including the cultural trauma endured by both.

The weekend of 22-24 April saw their work for the Irish language bear fruit with Deireadh Seachtaine na Gaeilge.

A group of seven traveled from Ireland to the Celtic Junction for the event, but their friendship began a few years earlier by happenstance when paths crossed.

Réamonn Ó Ciaráin, Director of Education Gael Linn, and Chairperson of Aonach Mhaca in Armagh, was part of the delegation who made their way across the pond to Saint Paul’s.

O’Shea put her all into the weekend. All studio activities were shut down and normal rehearsal spaces shuttered only to be reopened as four Irish language classrooms for those from near and far: Gaeilge agus fáilte.

“In August 2019, I was attending the Minnesota Irish Fair where I met Patrick O’Donnell (Head of Education) from Celtic Junction Arts Center at the scattering, in the final minutes of the fair. From that chance meeting a great cultural exchange and friendship began to grow,” says Ó Ciaráin.

Covid came and plans to meet again were shelved, but the seeds were sown, and a cultural connection and friendship blossomed.

“This friendship was very meaningful despite being conducted virtually during lockdown. One highlight was an hourlong webcast dealing with issues of language revitalization, music, and song,” reflects Ó Ciaráin.

Witness a musical collaboration between instructors from the Traditional Arts Partnership (Armagh) and the @IrishMusicCtr with a set from Ojibwe artists, The Sullivan Squad of Lac Courte Oreilles, WI on Friday, April 22. In-person AND streaming.https://t.co/LiAJgCpQ20

Spring was in the air, and with restrictions lifting and the support from many in Ireland, the group from Aonach Mhacha in Armagh city and Traditional Arts Partnership in South Armagh made their Easter journey to Saint Paul’s, exploring the local landscape and connecting with its land and language.

“We are all very keen to plug into the power of the rich indigenous culture and heritage of Turtle Island, and our shared colonial trauma in particular. We all find this intriguing,” says Ó Ciaráin.

The Irish language weekend tapped into all the authentic resources available at the Celtic Junction: language, history, scholarship, music, and dance.

"The Irish delegation brought their own talents and expertise to this first visit, which includes Irish language, music, song, and history” says Ó Ciaráin.

Combined with the stellar cast already in place at the Celtic Junction, this was only ever going to be a showstopping weekend.

Starting next month, we are pleased to offer the class "Arranging Traditional Songs for Guitar" led by master Irish guitarist Dáithí Sproule. Each week, Dáithí will guide students through specific arrangements of songs that he has recorded and performed through his career! pic.twitter.com/ZZf6bKzFQK

He is “our resident sage and renaissance man,” says O’Shea, and is “really quite incredible.”

O’Shea put her all into the weekend. All studio activities were shut down and normal rehearsal spaces shuttered only to be reopened as four Irish language classrooms for those from near and far: Gaeilge agus fáilte.

Ó Ciaráin also taught one of the classes, and he brought a little something from home to tempt his Irish language learners. Tayto chips, or crisps as they say in Ireland. Teanga agus Tayto: who could resist?

“There is an encouraging growth in the interest in the Irish language across the USA," says Ó Ciarán. "And yes, if they are learning Irish in the USA, then those back home should also be learning when it’s on their doorstep."

O’Shea, who modestly claims to have “enough Irish to be dangerous,” hopes this is the first of many more Irish Language weekends.

“Hopefully this will be the inaugural first weekend of a 20-year run — that's our goal," she said. "We want to make this something that happens going into the future."

With her passion, diligence, and determination, the Irish language is in safe hands in the Celtic Junction and Twin Cities.