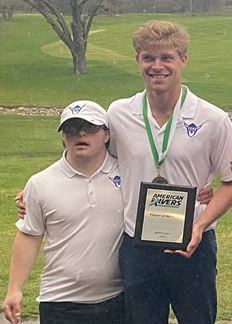 Ben Phipps, right, celebrates his victory in the American Rivers Conference golf championship with a friend.

Ben Phipps dug a big hole for himself in the first round of the American Rivers Conference championship at Geneva Golf & Country Club in Muscatine, Iowa but the Luther College senior from Ardee, Co. Louth had the fortitude to claw his way back to earn champion honors for himself and his team.

Due to a forecast of near-certain rain, the 54-hole event was played over two days instead of three, the golfers tackling 27 holes each day. Phipps opened with 80, nine strokes off the round’s low number. Subsequent nine-hole totals of 35 and 38 still left him eight behind.

The third and final round proved decisive, however. Phipps, who plays out of Ardee Golf Club, helped himself by shooting 4-under-par 68, while the pacesetter skied to 83. But there was still golf to be played as teammate Jay Fjelstul (son of Head Coach Scott Fjelstul) matched his 54-hole total. A sudden death playoff was decided in Phipps’ favor on the second extra hole.

Luther, which is located in Decorah, Iowa, won the team scramble by 21 strokes and has earned a berth in the NCAA Division 3 National Championship at the Mission Inn in Howey-in-the-Hills, Fla. beginning May 10.

The University of Washington won the Pacific-12 title at Aldarra Golf Club in Sammanish, Wash. Alan Murray, a native of Bray, Co. Wicklow, is Head Coach of the Huskies, who had a three-stroke advantage on Stanford at the end of 72 holes. Unlike several other conferences, the Pac-12 does not move to match play to decide a champion.

Evidence of the Huskies’ depth is evident in that they placed only two golfers in the top 20, although one of those was medalist Noah Woolsey. This was their first conference crown since 2010. Murray, who played college golf at Toledo, assumed his duties at Washington in 2016.

“The lead was like the tide,” Murray said of the scoreboard battle amongst the Huskies, Stanford and Arizona State. “It kept going out and it kept coming back in. When all the cards were signed, we were leading, and that’s the best time to lead. The guys really were clutch and played some phenomenal golf down the stretch, all of them.”

Washington awaits its assignment to one of six sites for the NCAA Division 1 Regionals, which begin May 15.

Jordan Hyland came up a stroke short in the Golden Bear Classic at Glade Springs in Daniels, W.V. The Davis & Elkins junior from Belfast led after opening with 73 but 75 in the second and final round saw him passed by two rivals who went to a playoff to settle matters. Hyland had third place to himself. Teammate Sean McAufield took a share of 10th place. The freshman from Ardee, Co. Louth shot 77 and 79 to land nine strokes off the low number. Davis & Elkins won the team crown with a five-stroke edge over Concord University.

Josh Robinson of Marquette shared 13th place in the Big East championship at the Callaway Resort in Pine Mountain, Ga. The sophomore from Lisburn, Co. Antrim combined rounds of 72, 74 and 71 to finish the event a stroke over par and 12 behind the low duo. Marquette took second place among teams, three strokes off champion Seton Hall.

Shane Lillis of Tennessee Southern overcame a first-round 82 to rise to joint-15th place in the Mid-South Conference championship in Bowling Green, Ky. The junior from Cooraclare, Co. Clare improved to 73 and 72 to finish the event 17 strokes off the low number posted by Jarryd Elliott of the University of the Cumberlands.

Sam Murphy of Grand Canyon University staked a claim to a share of 20th place in the Western Athletic Conference championship at Boulder Creek Golf Club in Boulder City, Nev. The Galway freshman signed to rounds of 75, 69 and 75. At three strokes over par, he trailed medalist Nathan Cogswell of Seattle by 12 strokes.

A final-round 78 derailed Alex Maguire in the Conference USA championship at Texarkana Country Club in Texarkana, Tex. The junior from Mornington, Co. Meath posted consecutive 71s, which had him four strokes off the lead heading into the third and final round. He plunged to joint-26th, 10 strokes in back of medalist Michael Barnard of Middle Tennessee State. Regardless, Florida Atlantic topped the team table, although they were eliminated in the first round of the subsequent match play. Maguire lost his match, 4&2.

The Jacks, Hearn and Madden, both finished tied for 29th place in the Sun Belt Conference championship at Mystic Creek Golf Club in El Dorado, Ark. Hearn, a South Alabama senior from Carrick-on-Suir, Co. Tipperary, posted rounds of 84, 75 and 71, while Madden, an Arkansas State junior from Dungannon, Co. Tyrone, signed to rounds of 81, 74 and 75. Their scores left them 14 strokes over par and 14 in back of Texas State’s Evan White, the medalist and the only entrant no to finish above par.

Laura Mooney, a Providence College sophomore from Cappincur, Co. Offaly, took second place in the College Women’s 10,000 Meters Championship at the Penn Relays on Thursday. It wasn’t a close second, though. Her time of 33:23.95 was well off the winning standard set by Rice’s Grace Forbes, who broke the tape in 32:59.15.

Providence’s Alex O’Neill won the 800 meters at the Brown Spring Invitational in Providence on Sunday. The sophomore from Ennis, Co. Clare got the job done in 2:06.07.

Providence College traveled across town on Sunday to pick up a couple victories at the Brown Invitational. Michael Morgan, a freshman from Sligo, captured the 1500 meters with a 3:47.41 clocking. Shane Coffey, a sophomore from Naas, Co. Kildare, was fleetest in the 3000 meters. The teletimer caught him in 8:17.24.

Tulsa’s Michael Power, a junior from Dungarvan, Co. Waterford, took fourth place in the 1500 meters at the Payton Jordan Invitational in Palo Alto, Calif. His time of 3:40.97 was only a couple seconds off the winner’s 3:38.17.

The 5000 meters at the Payton Jordan was split into two sections. Butler’s Barry Keane, a senior from Waterford, got third place in the faster section. He reported home in 13:26.29 in a race won in 13:25.62. The Tulsa duo of Peter Lynch and Cormac Dalton finished 1-2 in the other section. Lynch, a grad student from Kilkenny, ran a winning 13:43.52, while Dalton, a junior from Mullingar, Co. Westmeath, was along in 13:43.77.