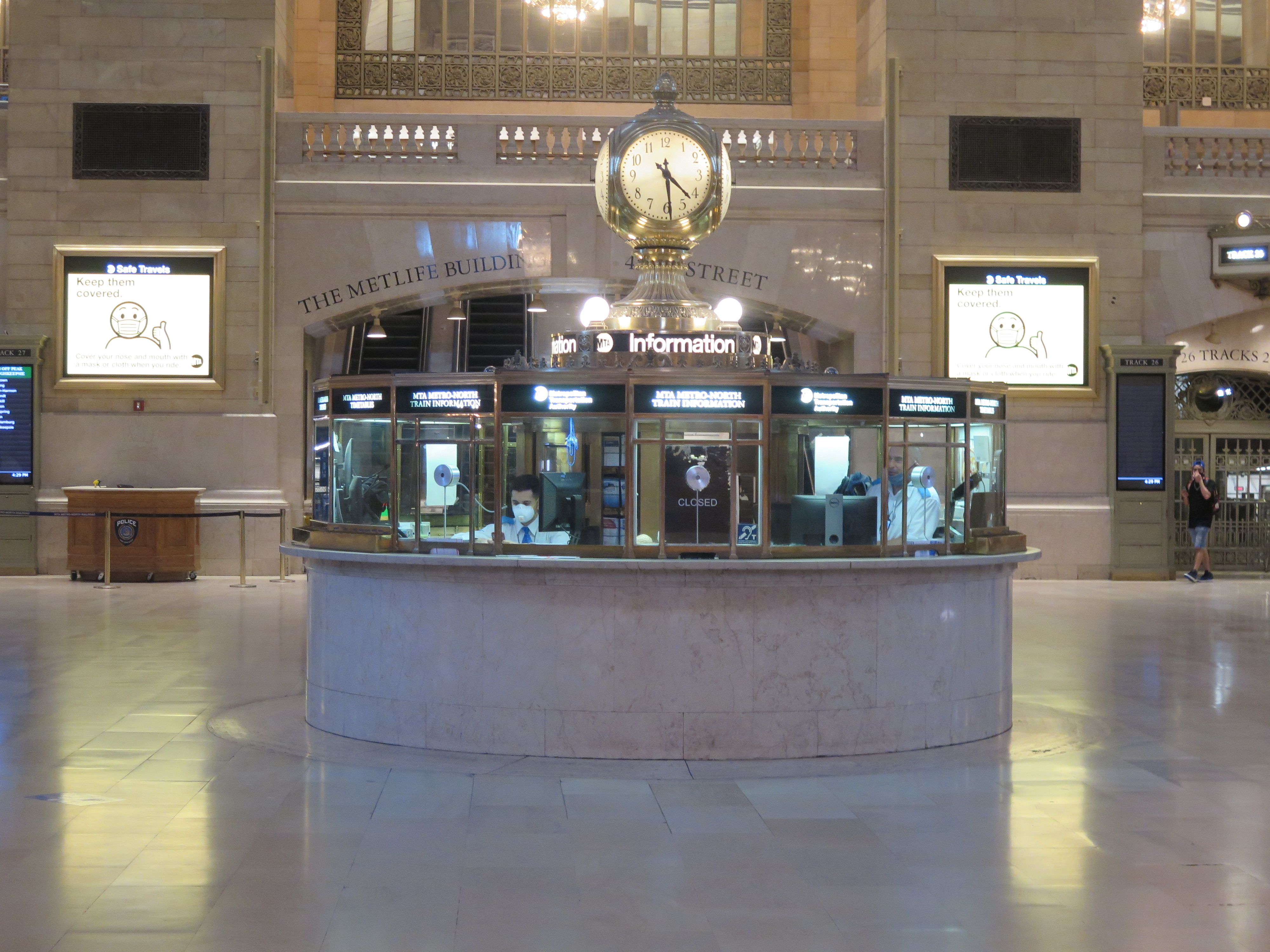 Janno Lieber has a message for the Irish.

Well, specifically the MTA Chairman and CEO has in mind people living in Woodlawn, when getting out word about the $5 flat fare for weekend and weekday off-peak Metro-North trips between the Bronx and Manhattan.

“It used to be much more expensive than the subway – we’ve reduced the price to get more people access and better commutes,” he said.

At a multicultural media roundtable at MTA Headquarters in Downtown Manhattan on a recent Friday morning, the Chairman and CEO may have name-checked the Irish first, but he took questions and comments in short order from outlets serving immigrants from Senegal, Poland, China, Pakistan, the Caribbean and elsewhere as well as media based in Black, Jewish and other local communities.

The Lieber approach is upbeat, even when talking about the system’s $2 billion deficit. The MTA saw a 90 percent drop-off in the number of subway riders during the height of the pandemic and the figure was 95 percent for commuters on the railroads, amounting to $200-million-a-week losses in what is a $18 billion a year business. In their new boss’ view, the MTA was saved by the courage of its workers, who showed up to get the doctors and the nurses to the hospitals and the grocery workers to the grocery stores.

The Federal stimulus helped a great deal, too.

“We need state government to come up with a plan,” Lieber said.

Then he added in relation to the short-term picture, “Gov. Hochul’s budget allows us to keep fares flat for the second year in a row.

“We need a lot of new revenues to make sure we don’t have to raise fares.”

His strategy is to win hearts and minds.  A first step is recognizing the competition posed by the various other options – working from home, Citi Bike, private cars and services like Uber. “We’re trying to make it [mass transit] a lot more appealing and faster,” he said.

The Chairman and CEO’s approach is underpinned by a philosophy. “It’s not just moving people around,” he said. “It’s a connection to jobs, education, economic opportunity, seven days a week, 24 hours a day.”

“If we are going to make progress on equity in our society, fairness for people of all communities and all income levels, we need a better mass-transit system – safer, faster and more affordable,” he said.

Lieber made a number of references to new discounts, particularly OMNY, the fare-capping, Monday through Sunday, touch and go system.

In addition, the Chairman and CEO wants to get the word out about “Fair Fares,” an underutilized program offering half-price subway prices for which up to a million New York City residents are eligible.

Asked about the possibility of the MTA advertising in ethnic and community media, he said that it seemed to him a “great idea,” and when it was raised again later by a second reporter, he promised to look into it and “address the issue” at a later date.

Lieber said, elaborating on one of his central themes, “The bus system is truly an engine of equity and equality in our city.”

He added that the MTA had embarked with Mayor Adams on an “ambitious plan to improve the speed of buses. This is really important for outer-borough neighborhoods especially.”

The Chairman and CEO said the MTA is going to double the number of bus lanes; and there are going to be more cameras. Increased enforcement was working with only one in five of those ticketed reoffending, he revealed, and less than one in 10 of second-timers offending a third time.

He also stressed the move to electric buses and cleaner emissions: “Mass transit is the antidote, it’s the solution to climate change.”

“There’s no reason why we shouldn’t have an all-electric bus fleet. We’re committed to achieving that, so that buses become even more friendly to the environment,” Lieber said.

In Queens, the bus redesign is a “conversation and it’s just beginning,” with 14 meetings scheduled for the spring and summer.

Part of the aim of the redesign is to reconfigure routes that end up in places for long-obsolete reasons – for example, at trolly terminals, the docks and warehouses.

“We did it in Staten Island. It’s been a success. It’s improved bus speeds. We’ve done it in the Bronx; we’ve gotten everybody’s agreement,” he said.

In the context of the Bronx, Lieber also spoke about the five-year plan to link Penn Station and new Metro North stops in the borough, as well as to Westchester and Connecticut. The project will take over and upgrade Amtrak’s existing Hell Gate Line.

“We’re moving ahead with the $52 billion five-year capital program, maintaining the physical system,” he said.

Lieber was speaking with specialist knowledge, for as President of MTA Construction & Development from 2017, he led the creation and implementation of the 2020-2024  capital program. The former President of World Trade Center Properties LLC was then appointed last summer as the interim head of the MTA and was confirmed in the position in January.

As for the “iconic” subway system, said the MTA boss who takes the Q train from Brooklyn, a lot of work was done on it during the pandemic.

He said: “We’ve been making progress on projects.”

“We redid the Times Square shuttle [to Grand Central],” he said, by way of example. “That is the oldest part of the system and we completely redid it during Covid.”

The $5 billion plan to overhaul the signal system has been continuing and has been completed on several of the busiest lines, notably the E and 7 that link Manhattan and Queens neighborhoods.

The L train, which takes 300,000 people daily between 14th Street stops in Manhattan and neighborhoods in Northern Brooklyn, was due to shut down before Covid happened; its upgrade was completed ahead of schedule by six months, and $100 million under budget, without the line closing down.

The MTA did more during the pandemic on accessibility and the requirements of the ADA than at any other time in its history; 14 stations were completed and work is being done on another 26.

Speaking on issues of safety, including antisemitic and other bias attacks, the Chairman and CEO said, “For people to come back to mass transit, it has to feel safe and it has to be safe.

“No one is more focused on this than Governor Hochul and Mayor Adams,” he said. (He was speaking four days before the April 12 attack on the N train in Brooklyn).

“We’re going to increase the police’s visibility in the system.  I hope some of you are starting to see that. More cops are on platforms, more cops are on trains, I’ve been pushing that for a while,” Lieber said, adding that the new administration at City Hall has been rather more responsive in this area than the previous one.

On the issue of homeless people being increasingly visible in recent times in the subway system , Lieber said there was a need to get people help.

“That effort at the end of the line stations is really under way. They’re offered opportunities into services,” he reported.

Asked about one problem many commuters see often, he responded, “Fare-evasion is not a small thing.

“People who want to play by the rules in all parts of their life. They see people jump the turnstile or going in the [fire-safety] gate and they start to feel like they’re suckers, and we have to make it feel like everybody is playing by the rules. It starts by the police actually enforcing against fare evasion. And the number of summonses they issued since the beginning of the year is way, way up, four or five times what they were last year.

One by-product of a clampdown on fare evasion is that police frequently “catch the bad guys,” often with weapons.

Lots of cameras can help, but also the MTA is looking at ways to make the gate less easy to access from the outside.

Technological approaches are also central to tackling the issue of “track intrusions,” in terms of systems that detect people before the crews do. Lieber reported that the great majority of such incidents are individuals voluntarily leaving a secure area like the platform – in the last year more than 2,000, each of which can potentially cause danger to everyone. Meantime, the actual “pushings” are rare -- there were four last year -- even if they get almost all of the publicity.

In his concluding remarks the Chairman and CEO said, “I spent 14 years on the rebuilding of the World Trade Center. So, you know that I’m an optimist. I believe in New York. I fully believe that New York is always getting better.”

And referencing the “immigrant spirit” of New York, Janno Lieber said, “People have overcome so much to get here and to make a life that I’m always optimistic. I think that our best days are yet to come.”