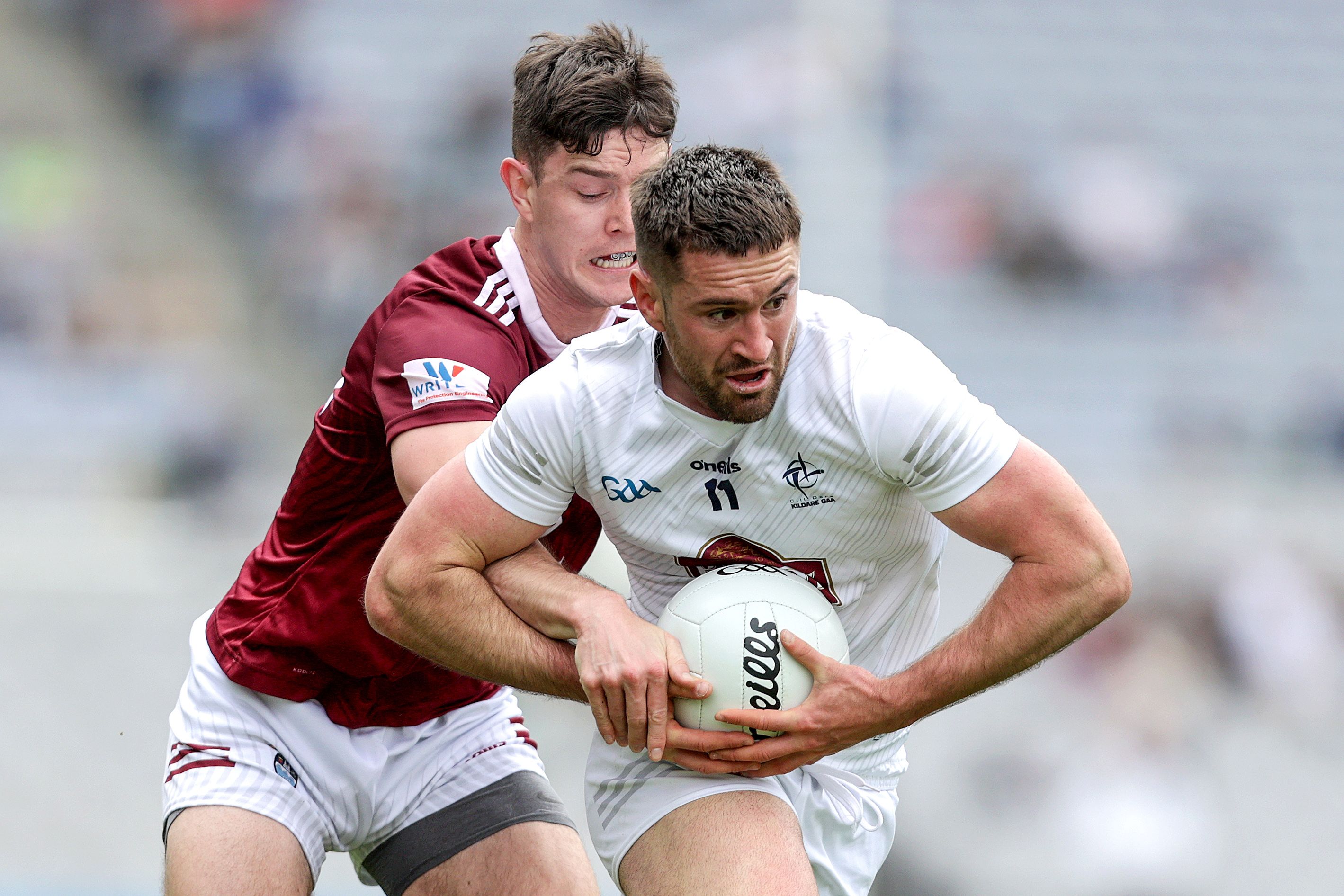 Kildare got past Westmeath in the Leinster semi at Croke Park. See results below. INPHO/LASZLO GECZO

On a beautiful Sunday afternoon, the sizeable crowd in Gaelic Park, enjoyed the first final of the 2022 season as Mayo goaled their way past Cork in extra time in an exciting and enthralling Intermediate League battle. Indeed Cork had a chance to claim the spoils in the waning moment of regular time, but an effort for a goal or glory, got neither, thus setting in motion a sequence that allowed Man of the Match Ollie McLean to level for Mayo at the other end.

Cork started strongly as Dara Walsh and Jack Divilly hit early points. However, for the remainder of the first quarter Mayo were in maurauding mood, as first, their chief danger man Adrian Varley forced a great save form keeper Casey. Mayo would hit six unanswered points courtesy of Varley (2), Shane Slattery (2) and McLean had a brace as well. Cork then stifled Mayo’s momentum and went on a small scoring spree, with points coming from McCullagh (2), Alan Rafferty and Divilly.

However for the remainder of the first period Mayo were in control as Conor Bowden and Tom Conway held sway in the middle, and Adrain Varley was causing havoc up front as his team led by 0-10 to 0-6 at the short whistle. The former Galway player added three, while McLean had the other. Indeed Cork were lucky not to be further in arrears as Shane Slattery sent a blistering shot outside the upright.

On resumption, the busy Stephen Curly pointed from the corner but Pa Glynn responded likewise at the other end. Mayo were still extending their lead as Slattery and McLean chipped in with two points before a powerful vignette of skill from Dara Walsh ended with him crashing the ball to the net after travelling more than half the field and selling multiple dummies in transit.

Mayo were still calling the shots as McLean and Slattery (2) added minors and Matt Queenan sauntered up from defense to hit a brace as the Westerners appeared to be comfortably ahead by eight midway in the period. Over the next 10 minutes that perception changed rapidly as Carroll O’Connor started a Rebel rally. Midfielder Conefrey motored in for a point and Michael Sheedy quickly followed with a goal. Then with five minutes left, Tom Joe Sullivan blasted a penalty to the net to tie the game, plus the Mayo perpetrator was black-carded for his indiscretion, thus adding to Mayo’s concerns. Cork now seemed to be temporarily in the driving seat as Cathal O’Carroll put his team ahead for the first time since the early minutes. Then play switched to the other end and a great diagonal ball from Curley set up the chance for Ryan O’Neill to level with just under two minutes left on the clock.

Possession was now precious and pivotal as veteran Ger McCullagh won the ensuing kick-out and he carried deep to shoot over a fine point for the lead. Cork won the resultant kick-out, and looked destined to increase the lead with a handy point, but instead opted to go for a goal, but blasted wide. When play was hastily transferred to the other end, Ollie McLean made no mistake with his chance to point, leaving the score tied at full time, 0-20 to 3-11. In extra time Andrew Burke pointed for Cork, but McLean restored parity after Curly was fouled.

Then McLean added a superb point from away the field, his best score of the game, before David Ponds goaled after a Curly mark set the stage for the major strike.  Tom Conway and Ger McCullagh closed the first extra period with points, leaving Mayo ahead by four, 1-23 to 3-13.  On the changeover Cork were just back to a point behind as Andrew Burke blasted in a goal. However, they would get no closer as Conor Bowden goaled and he was downed for a penalty in his next attack, which McLean tucked away. Then it was a case of defenders Queenan, Cuniffe, Varley and company sealing up the attack routes, while a late goal from Shane McNeilis ensured that Mayo’s victory cake was well and truly iced.

In this Junior B semifinal a young skilled and fleet-footed Rangers squad had little difficulty dispensing with a more seasoned Kingdom squad.

Rangers were quickly out of the blocks as Chris Mulvihill chipped in with a brace before Keelan Hickey pointed to capitalize on a great run by Davis Langan. However, at the other end young Mulvihill was torturing the Kerry rearguard as he added two more points. Still in the early exchanges Kerry were doing their best to stay in touch as penetrating runs by Keelan Hickey, set the scene for minors for himself and David Monaghan. However midway in the period Rangers firmly stamped their class and authority on the proceedings as Jack Rooney drove in a fine point from midfield.

Joey Grace followed up with a brace before Man of the Match Mulvihill struck their first goal. Indeed Kerry didn’t have much luck as they then conceded a goal with the keeper being AWOL or on outfield duty, while they spurned the chance of a major by hitting the upright from the penalty spot. Still points from Rory Grogan and Hickey, their best player, had them adrift by 2-6 to 0-5 at the break. Gary O’Driscoll enter the fray for the Kingdom but his first effort came back off the post before Rangers tagged on three points courtesy of Niall McKenna, Michael Lonaghan and Joey Grace. Kerry would briefly break up the Rangers’ flow with points from David O’Connor and Rory Grogan, but a goal by Eoin McCaffrey, resulting from an interception, definitely killed off the game as a viable contest. In fairness to Kerry, though they might as well being shoveling sand against a Rangers’ riptide, they kept trying. Sean Kelly landed two fine points, but scores from Grace, Loane, Mulvihill and company polished off a fine performance by this young side with plenty of scores, skill and stamina.

This Junior B league semifinal ended all square, though it looked midway in the second period that Shannon Gaels were cruising to victory. They led by seven points and also had a numerical player advantage. Perhaps you shouldn’t count your chickens until they are hatched, or in this instance, the deployment of the bench may be the issue. Meanwhile the exchanges were well balanced in the opening ten minutes. Shane Slattery and Stephen McAfee scored for Rangers, while Sean Smith and Cormac Maguire did likewise for the Gaels. Then Rangers stepped up production as Slattery had a brace and Stephen Curly curled over another, plus they had another shot rebound off the post.

Shannon Gaels weathered the storm and would go on to comprehensively dominate the remainder of the period, accentuated by the statistic that they hit an additional 1-5, while holding their opponents, namely to a solitary Conor Bowden point. Pascal Kavanagh, Sean Smith, Shane Reid, Dylan Gunning and Rory Duggan combined well to lead by 1-7 to 0-6 at the break. Upon resumption a goal from big Dave Hansbury reduced the lead to a point, but the Gaels continued to dictate. Julian Jamahais added a point before Rory Duggan burrowed his way in for a goal. Sean Smith and Shane Reid would add further points as they now led by 2-10 to 1-6 with just a quarter left. Indeed St. Raymond’s chances seemed slim for a comeback as they had a player in the sin bin.

Raymond’s revival began with a Stephen Curly point. This busy corner forward soon followed with another well-worked point, and capped his scoring spree with a pointed free after he was fouled. St. Raymond’s were now camped in Shannon Gaels’ territory as Shane Slattery and Stephen McAfee points left a goal between the sides. However an Eoin McCaffrey goal had the sides level as time expired. Naturally St. Raymond’s were quite happy with the end result, while I’m sure Shannon Gaels will review side line strategies. Getting everybody in the game is very commendable, but that, and, the victory securely in the bag may occasionally be incompatible.