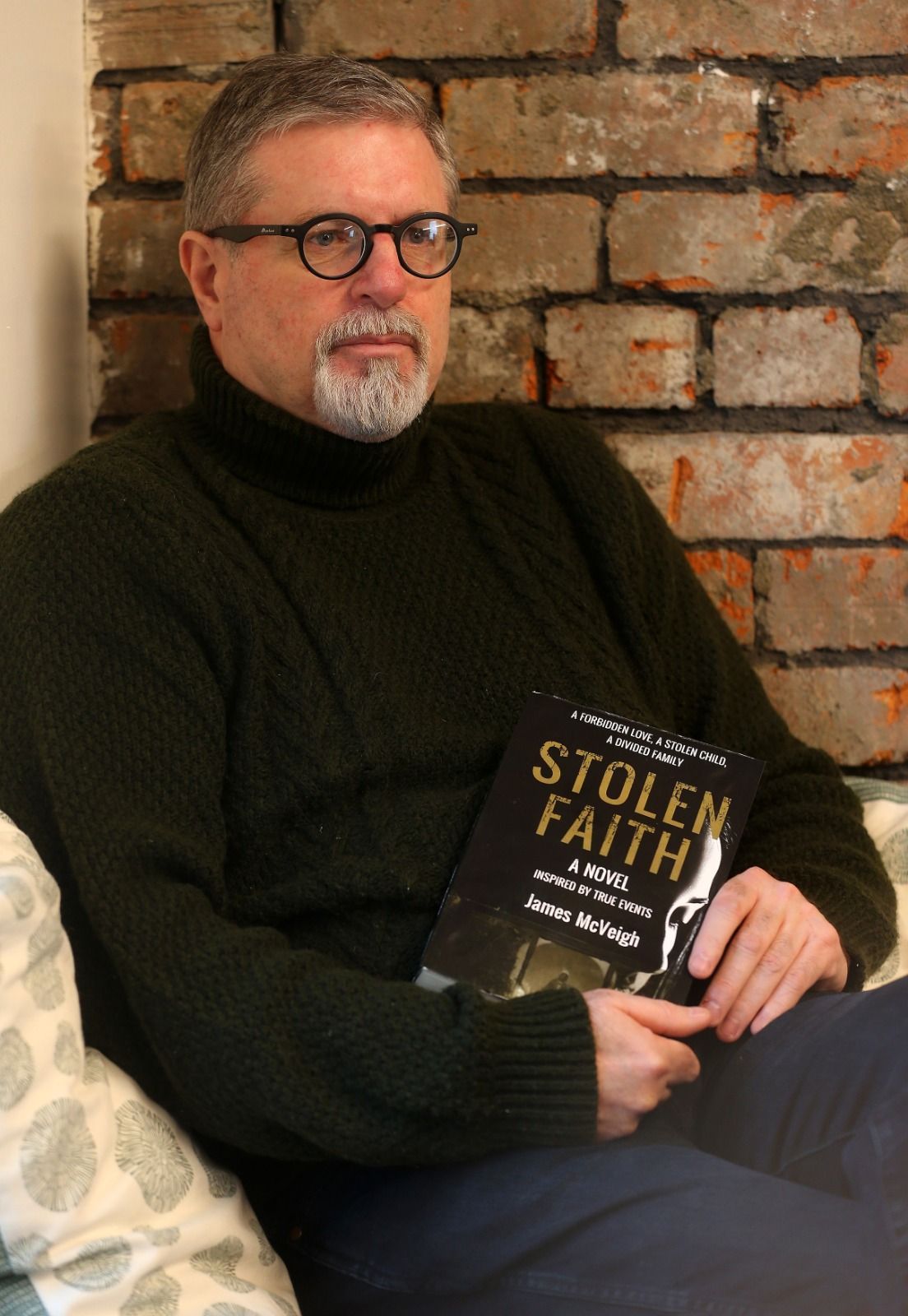 Love story based on true events

James McVeigh’s first novel begins in a Belfast at war.

James McCann meets a spirited and beautiful young woman named Rose Rafferty and a romance develops, quickly by necessity, for the young GI from Boston is one of thousands of servicemen about to be shipped out to fight on the Continent. It’s early June in 1944.

“It is a tragic love story and thriller,” McVeigh said about "Stolen Faith."

“It’s partly an Irish story but largely an Irish-American story. Three quarters of it is set in modern Boston.”

He added, “I don’t want to give too much away, but after he is sent to France, she learns she is pregnant and is sent to a mother and baby home in Tuam, Co. Galway, to have her child.”

The author said, “What follows is the dramatic story -- one family’s fight to find a stolen child in America, to uncover the truth and to hold the church and state to account.

“There are lots of twists and turns. Tragic, brutal at times, but it’s ultimately uplifting, I hope,” McVeigh said. “It’s a work of fiction at one level but it is inspired by true events – many thousands of children were stolen from their mothers and trafficked to the U.S. by the Catholic Church.”

McVeigh, who spent 16 years in prison, was the “last OC of the IRA in the H Blocks” and released in 2000 under the terms of the Good Friday Agreement.

“I wrote my first book in prison,” he said, “I studied for a history degree in prison and went to Queen’s University when I was released and got a master’s degree.”

He was a Sinn Féin councilor in Belfast for eight years and is a founding member of the James Connolly Visitor Centre in the city.

McVeigh pointed out that he’s an organizer with Connolly’s union, SIPTU. “I’m doing my best to follow in his footsteps in my own small way,” he said.

The author’s previous two books were well-received works of historical non-fiction, while his brand new work of fiction has been described by Andersonstown News as a “definite page-turner.”

Family: Married with three boys and one grandchild, Koda, which means “little bear” in the Dakota language.

I’m a full time trade union organizer, so I write in my spare time. I try to get down to Donegal for quiet weekends and inspiration and write. If “Stolen Faith” is a hit in the U.S., well, I’d love to write full time. This won’t be my last novel, I hope.

Well, in the words of Nike, just do it. Begin, make a start. Write the first line, then the first para, etc. You don’t have to have a degree to write. You can do it. Believe in yourself. Work out what you want to write about, fact, fiction or fantasy? Then read the best in that genre and study how writers write.

“Lord of the Rings,” an incredible work of sheer imagination; “Labour in Irish History” by James Connolly; “Trinity” by Leon Uris, still hard to beat — a great introduction to our history of resistance to British occupation.

A biography of Brendan Behan, the Borstal boy himself. What a raw talent and what a character! Brendan wasn’t a professor of literature – he was a Borstal boy, an Irish rebel with raw talent. And of course he was Irish. That explains a lot. It’s in our blood and DNA.

“In the Skin of a Lion,” by Michael Ondaatje, the Canadian-Sri Lankan writer. It is a wonderful lyrical love story set in a time of great change and revolution in North America. Magical. I’m always on the side of the underdog, the ordinary people who built the world we live in. The hands that built America.

Brendan Behan and to have had a beer with him in the Old Town Bar in Manhattan, him and a young Maureen O’Hara. So a beer with them both and a dance with Maureen. How’s about that for a Saturday night out?

Bobby Sands’s sacrifice and then his diary and writings changed my life. He lit in me that inner thing, the spirit of freedom.

Playing in the sea with my grandson Koda on Mullaghmore beach in Sligo with the beautiful Leitrim mountains and Benbulbin in the background.

“Stolen Faith” is available at Barnes & Noble, Bookshop.org and Amazon.