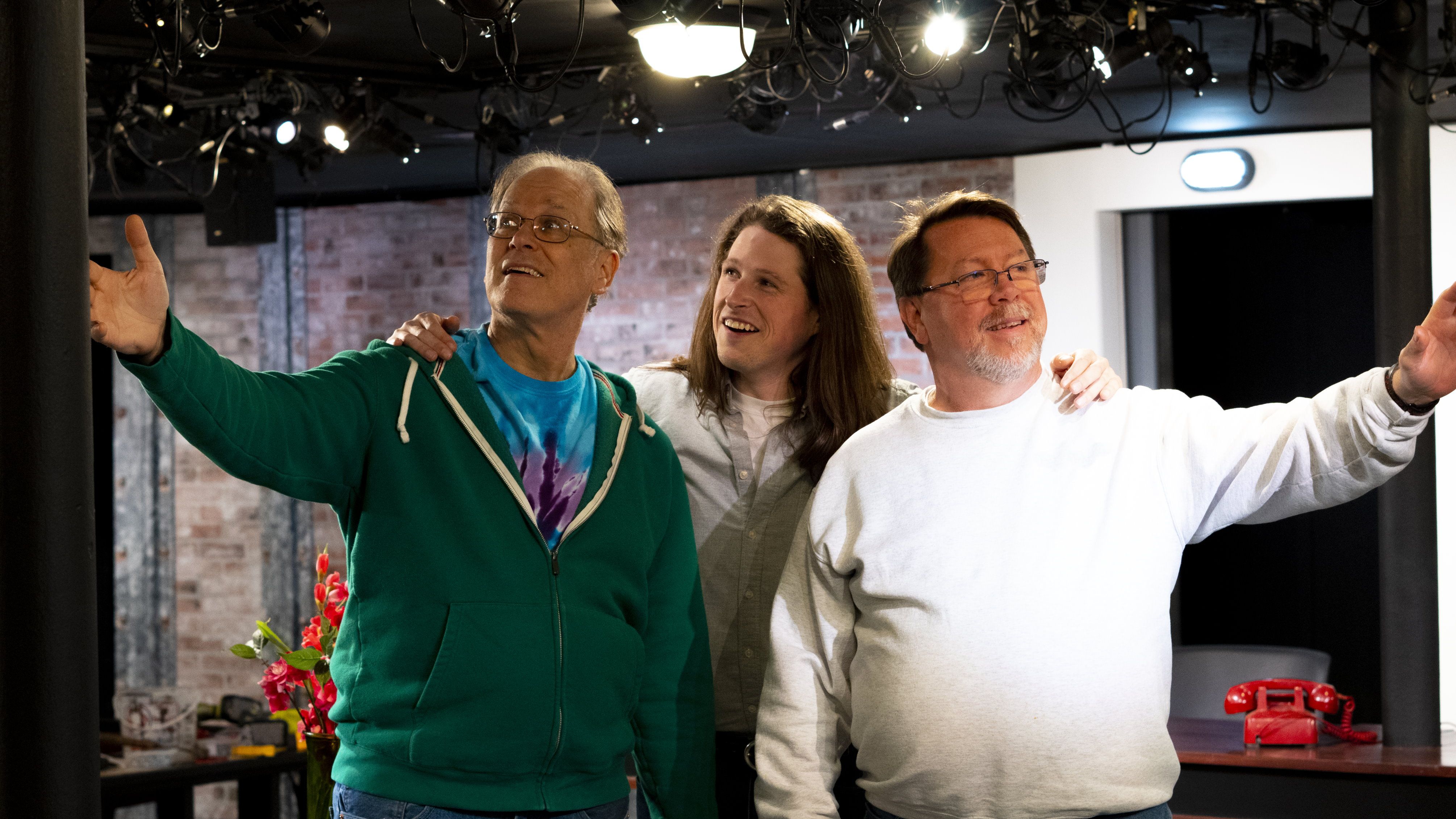 Irish gather, ponder in 'The Lobby'

Someone leaves, and the person they’re looking for arrives. That happens more than once in “The Lobby,” it being a comedy farce.

The opposite was the case with Lou Ursone and Ellen Cohn, strangers who were seated next to each other at a play and got chatting.

For the Dublin-born playwright Don Creedon, it was serendipity.

“Ellen is an independent theatre producer and a good buddy of mine. She read this play [‘The Lobby’] years ago and loved it,” he said.

Ursone, it turned out, is the executive director of Curtain Call in Stamford, and he read “The Lobby” subsequently on Cohn’s recommendation and was taken with the story of Creedon’s main characters, Jimmy Burgess, the unassuming night doorman of a posh downtown loft-space, and his old friend Myles O'Riordan. The result is the world premiere production currently on stage in Stamford.

"I love producing/nurturing new works," said Ursone, in a statement. "I am always on the lookout for original pieces that are looking for a first home, so I was thrilled when fate brought me ‘The Lobby.’"

Director Stephen Emerick said, "Rarely in community theatre do you get the opportunity to work on a new play, so I am very excited to direct the first full-scale production of ‘The Lobby,’ and even better at Curtain Call where I've been volunteering and performing since 2007."

Myles and Jimmy are best friends from Dublin, Creedon revealed, but whose differences in personality are magnified in their status as immigrants.

“Myles wants to make partner at his architecture firm. He has high aspirations,” the playwright said. “Jimmy is not here as long as Myles. He has not settled into his groove.

“Myles sees an opportunity to make himself look good in the eyes of his mother, who decides to visit on her darling son. Myles drags Jimmy into a big elaborate hoax around where he actually lives.”

Creedon added about Myles, “While he’s trying to make a go of it, he’s also a bit of a scoundrel. He parties hard, he overspends.

“So it revolves around their relationship and the hoax,” the playwright said. “The lobby is perfect to get people in and out of scenes, the perfect place for tenants or wannabe tenants in the building. It’s set in New York, but all eight characters are Irish.

“Figuratively, a lot of them are in the lobby in their lives – 20-somethings trying to find their way in the world. There’s the extra element of them being from somewhere else. Some of them find that they do belong here, they feel at home in America.  And others are saying maybe this lobby of America is not what it’s cooked up to be. ‘I don’t really belong here, I want to go back.’ I think that a lot of the characters do make that realization for themselves,” he said.

“Two elevator doors are used, I hope, to good comic effect, There is a lot of physical humor, and there are two painters who are a couple of chancers, as well.”

Asked if he enjoyed the process of his own work being developed on stage by others. “Totally, yeah. I’ve fun with it,” Creedon said, adding that the late director of the Irish Arts Center Nye Heron “used to be amused at how much I liked to laugh at my own stuff.”

Usually, though, the Dubliner is more centrally involved in a production. That’s almost always the case with his Poor Mouth Theatre Company, which is based in An Beal Bocht in the Bronx. That group got back on track after an almost two-year layoff with its annual Christmas panto.

The Poor Mouth had been due to perform its annual mini-festival “Puttin’ on your Shorts” a week after lockdown. “It was great to get back up there,” Creedon said, referring to the panto. “We’ve been steady since, doing readings and performances.”

As to “The Lobby,” he said, “We work-shopped it over the years. I was happy with the shape it was in.”

Creedon believes that sometimes in the Irish theatre-going community in New York they like a play because it’s Irish. “It will be interesting to see this in a different context, because this theatre company doesn’t really have Irish connections.

“I’m hoping this piece will stand alone as a well-made play. While they might be charmed by the Irish characters, hopefully they’ll relate to more than that.”

Creedon is also interested to see how the genre works for audiences. He said, “The British farce we all know, but there aren’t too many Irish farces.”

Director Emerick said, "I hope audiences enjoy this charming and hilarious story of Irish immigrants living in New York City, as much as we are in creating it”

"As an actor, for me, there is nothing more exciting than creating a role," said Ursone, who has mounted more than a dozen concert readings or full productions of new works. "Each season I try to find at least one new play or musical to produce."

Emerick added, "Collaborating with this cast and creative team has been extremely rewarding. As we've worked through the script, we've created a space where everyone can voice their input and try new things, often resulting in fits of laughter at each other's jokes and attempts. Plus, everyone's willingness to discuss the details of the story, and create three-dimensional characters has really ensured that we are on the right track."

Performances are on Thursday, Friday and Saturday evenings at 8 p.m. and Sunday afternoons at 2 p.m. through May 22. The Dressing Room Theatre is located at The Sterling Farms Theatre Complex, 1349 Newfield Ave., Stamford, Conn. Doors open one hour before show time. Tickets are $35 for adults, $25 for senior citizens and $20 for children under 21. (Discounted Flex Pass subscriptions offer savings of 25% and more.) Box Office: 203-461-6358 or on the web at www.curtaincallinc.com.

“The Lobby” is produced in cooperation with The City of Stamford with support from the CT Office of the Arts and funding from the Shuttered Venue Operators Grant. The show is sponsored by Britta & Denis J. Nayden Charitable Foundation Ltd. It is produced through special arrangement with Concord Theatricals, N.Y., N.Y.