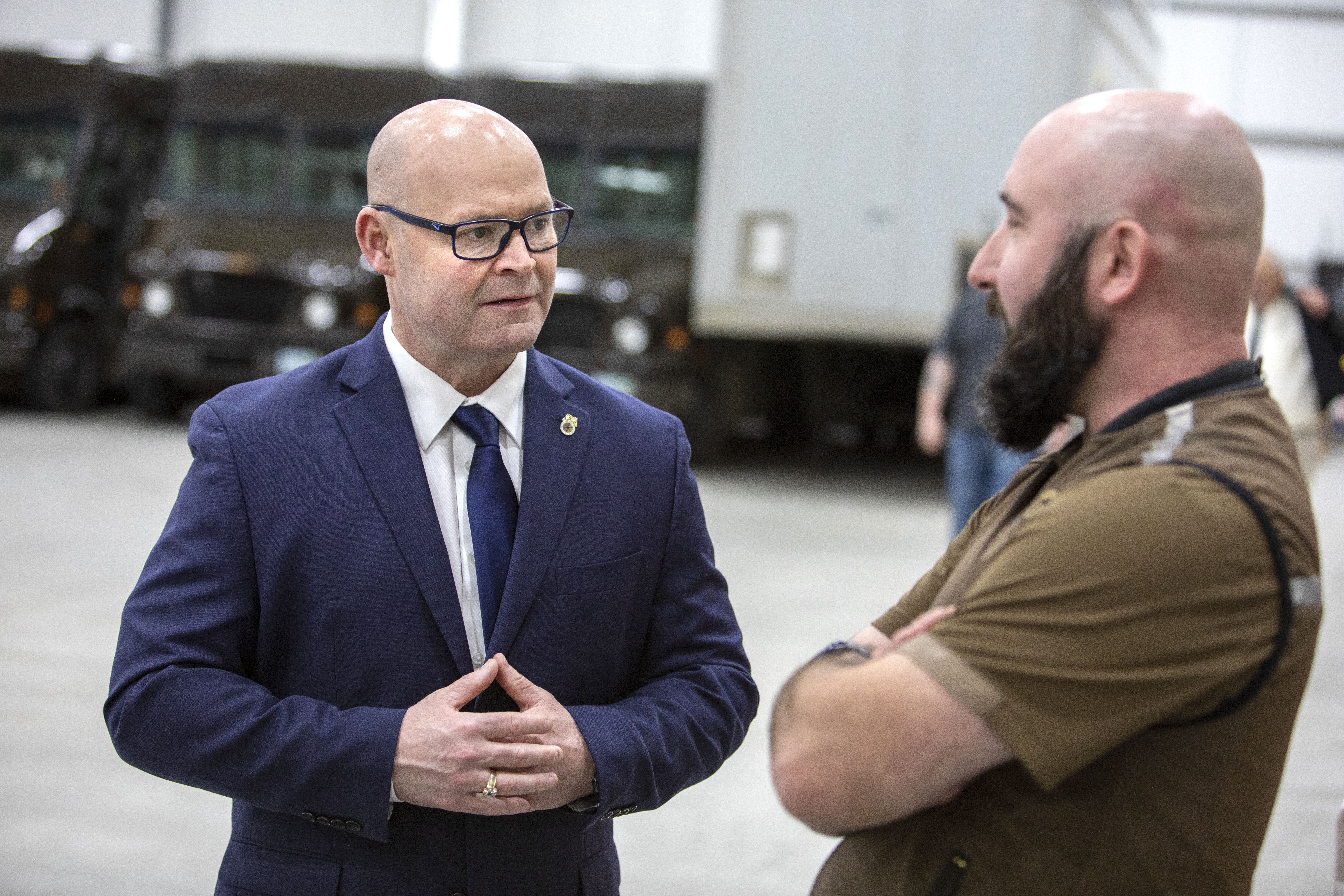 LABOR LIVES: Boston-Irish Teamsters Pres has Amazon in his sights

Since taking over the job of General President of the International Brotherhood of Teamsters on March 22, Sean M. O’Brien has been a man on the move.

Speaking recently by phone to the Irish Echo from a loudly bustling Florida airport, O'Brien discussed his first days at the helm of the nearly 1.2 million member union.

“For the transition we decided to be on the road,” O’Brien began, “visiting workplaces every Monday and Tuesday, and back to D.C. on Wednesday for International business.”

Born and raised in Charlestown, Massachusetts, described by O’Brien as “a very strong Irish community in the city of Boston,” the newly minted General President became a Teamster at 18 years old.

Now 50, O’Brien, who comes by his Irish roots through his father’s side of the family, started in the rigging industry hauling heavy equipment. He has hit the ground running: “we are going to try to be in every workplace over the next year, in every part of the country we possibly can,” he says.

An ambitious goal but O'Brien appears to be well on his way, having been able to meet with workers in New Hampshire, Florida, Maryland, California, Minnesota and Georgia in less than a month on the job.

Asked if he considers himself a militant union man, O’Brien did not hesitate. “Yeah, we definitely are a militant organization under our leadership team of Fred Zuckerman (General Secretary-Treasurer) and myself and all the rest of the General Executive Board members.”

O’Brien and his team intend to bring that militancy to bear “negotiating the strongest contracts and making certain that we take on corporate America for the benefit of our members, and reestablish a strong middle class.”

Teamsters General President Sean O’Brien met with @POTUS today during an event on the U.S. trucking industry at the White House. #TruckingActionPlan pic.twitter.com/m0LZS5YndD

One of those contracts is the United Parcel Service contract representing close to 340,000 Teamsters. The 2018 UPS contract played a major role in O’Brien’s election victory over then General President James P. Hoffa’s preferred candidate Steve Vairma.

O’Brien had been assigned as chief negotiator for the Teamsters by Hoffa only to be removed for what O’Brien called “reaching across the aisle” to Hoffa opponents, including Zuckerman, who had narrowly lost when he challenged the longtime General President in 2016.

When sent to the membership for ratification, the contract with UPS was rejected, although the contract was enacted using a rule - what O’Brien termed “a loophole” - that required a two-thirds vote to reject a contract when fewer than half of eligible members cast ballots.

O’Brien notes that the 2/3 rule has since been eliminated. "No matter how many people vote in that ratification, whether it’s UPS national freight, DHL and the other contracts you have the majority to accept or reject the strike.”

Organizing has always been at the heart of O’Brien’s union game plan, going back to his days as the youngest ever President/Principal Officer of Local 25 in Boston, where he boosted membership by 30 percent.

It was no surprise then that organizing and increasing membership was a key plank in the O'Brien platform, in particular organizing delivery behemoths Amazon.

For O’Brien the stakes in dealing with Amazon are high.

“Amazon's a top priority for our organization,” O’Brien began. “The biggest threat not only to the parcel delivery business, but also in many other industries that we represent.”

It's the union's first change in leadership in more than 20 years.

O'Brien's promising to take on UPS and organize Amazon. He and his leadership slate ran on creating a more militant, strike-ready union. pic.twitter.com/l1tUvBDDc6

O’Brien ticks off the airline industry, rail, maritime, and trucks, calling Amazon “our most formidable opponent” in those sectors.

Referring to Amazon’s use of the independent contractor model, O’Brien says they, “have the advantage over our largest employer UPS and DHL, who do similar work.”

He adds: "The Teamsters plan to leverage up political strength to get some of these independent contractor models changed and expose them for what they are, a scheme to skirt the direct employee model.”

O’Brien comes into his job at a seemingly fortuitous time for union organizing with President Joe Biden calling himself the "the most pro-union president in American history” and unionizing efforts led by young workers at companies like Amazon and Starbucks emboldened by low unemployment rates.

Although the Teamsters have no role in the Starbucks revolution, O’Brien is all for it.

A recent meeting between O’Brien and Chris Smalls and Derrick Palmer, two of the leaders of the stunning April 1 pro-union vote at an Amazon facility in Staten Island, New York was treated as a major summit meeting across media platforms, both social and traditional.

How, the Irish Echo asked, could the Teamsters help the upstart Amazon Labor Union (ALU) as they move ahead?

“The one thing we can offer is strength,” O’Brien began.

Despite the lingering euphoria of the ALUs' unlikely victory over the anti-union forces of Amazon it is a long way from certification of the union to sealing a contract. "We will help with resources, providing attorneys, providing communications, whatever it takes to get a contract," he says.

“Any election, whether it's a local union election, a national election, or an organizing election is only as good as if we get a positive end result. Meaning that if you get a first contract in this, in this organized drive, which is going to be very difficult, we are going to provide as many resources with no agenda.”

Unfortunately no discussion of the Teamsters can take place without the question of organized crime being raised. The Teamsters operated under a consent decree that gave the federal government oversight of the Teamsters since 1989 when then incumbent Ron Carey had his win over James P. Hoffa overturned for receiving illegal donation kickbacks.

A five year sunset clause expired in 2021 meaning that the Teamsters are no longer under U.S. government oversight, a state of affairs that O’Brien intends to continue.

“‘We’ve come leaps and bounds from the consent decree and the sunset clause,” O’Brien states. “But, you know, the reality is we are going to police our own.”

We don't want the government involved, we want to make sure that we can prove to the government that if someone is not doing the right thing, regardless of whether they are organized crime, and they’re violating the constitution and our members rights, we’re going to hold them accountable and follow the procedures and take appropriate action.”

In taking on the role of General President of the International Brotherhood of Teamsters, the father of two sons, aged 18 and 21, had to leave his Boston home behind for the nation’s capital.

“It's been an okay adjustment,” O’Brien said. “My boys are grown. I can be home in an hour and 10 minutes. I live six minutes from Logan Airport. So it works out well. Very convenient.”