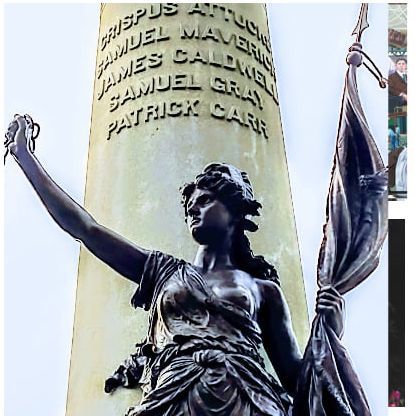 Many people assume the Irish first arrived in Boston during the Irish Famine period of the 19th century, but in fact they had a strong presence here throughout the 18th century, especially during the Revolutionary War years.

From naval leaders like John Barry and Jeremiah O’Brien and the fighting Sullivan brothers to Boston Massacre victim Patrick Carr, and the Scots-Irish who fought at Bunker Hill, the Irish were everywhere.

Here are some Revolutionary stops along the way:

The Granary Burying Ground, established in 1660, is located on Tremont Street in downtown Boston, about two blocks from City Hall. Largely used in the 18th century to bury Puritan leaders, the Granary Burying Ground has several Irish buried in its ground. Among them is James Sullivan (1744-1808), lawyer, orator and governor of Massachusetts. The son of indentured Irish servants from County Cork, Sullivan was a delegate to the Continental Congress and governor of Massachusetts in 1807.

Robert Treat Paine (1731-1814), a signer of the Declaration of Independence with Irish roots, and William Hall (d. 1771), a founder in 1737 of the Charitable Irish Society, the nation’s oldest Irish organization, are also buried in the Granary.

Perhaps the most visited gravesite in the Old Granary belongs to the Boston Massacre victims, which include Irishman Patrick Carr. Described by the Boston Gazette as a leather-breeches-maker, Carr and fellow Irishman Charles Connor heard the shouts on March 5, 1770 and moved toward the scene of the crime, according to Connor’s testimony.

Carr was the last man to be shot. He lingered for several days before dying of his wounds and was buried in the plot with the other four martyrs on March 17, 1770.

The Boston Massacre Memorial along Tremont Street was erected in 1888 by Irish leader John Boyle O'Reilly and other Bostonians, including African-American leaders. Mayor Hugh O'Brien, the first Irish Catholic elected as Boston mayor, called the Boston Massacre “one of the most important and exciting events that preceded our revolution." At the ceremony, O’Reilly read his poem about Crispus Attucks, the first man shot.

A few hundred yards away, a memorial plaque to Commodore John Barry was unveiled along Tremont Street in 1949 by Mayor James Michael Curley. Commodore Barry was a naval hero in the Revolutionary War who was chosen by George Washington to create the first U.S. Navy. He was born in Tacumshane, County Wexford in 1745, and was a favorite historical figure of President John F. Kennedy.

John Singleton Copley, America’s first great portrait painter, was the son of two Irish immigrants from County Limerick and County Clare. He was born in Boston in 1737, and by the Revolutionary War had painted the portrait of the town’s leading citizens, British and American alike. Copley Square Park in Boston's Back Bay was named in his honor in 1883. In 2002, the city of Boston unveiled a statue of Copley by artist Lewis Cohen. Copley’s original home on Beacon Street also has a plaque in his honor.

Jeremiah O'Brien created the "first act of Colonial piracy" in the Revolutionary War, when he and his four brothers led an attack on the British cutter Margaretta on June 12, 1775 at Machias, Maine, defeating the ship and taking its munitions as bounty. In 1937, a plaque was placed on the staircase next to the Hall of Flags honoring O’Brien “for winning the first navel engagement in the War of the Revolution and of his subsequent exploits in said war as the first regularly commissioned naval officer and commander of the Revolutionary Navy of Massachusetts." A portrait and a bas relief of Governor James Sullivan can also be found in the State House.

Finally, a number of famous paintings by first generation Irish-American John S. Copley are in the State House, including portraits of John Hancock, Samuel Adams and Thomas Gage.

Of the New England militiamen who rushed to Charlestown for the Battle of Bunker Hill in June 1775, nearly 200 were Irish-born, and several hundred more were born of Irish parents, according to historian Michael J. O'Brien. Among them was Colonel John Stark of New Hampshire, one of the heroes of the day-long conflict.

Major Andrew McClary of Epson, New Hampshire, whose parents were from Tyrone, was killed at the very end of the battle after fighting bravely throughout the day. Also fighting was Captain Ebenezer Sullivan, whose brothers James, who became governor of Massachusetts, and General John Sullivan, who forced English troops to evacuate Boston on March 17, 1776.

General John Sullivan, who led the Siege of Boston from Dorchester Heights in March, 1776, forcing British troops to withdraw from Boston, was the third of five sons born to Owen Sullivan of Limerick and Margery Browne of Cork, both indentured servants from Ireland who settled in New Hampshire. Sullivan commanded a brigade at Dorchester Heights during the Siege of Boston. The password used to enter the fortifications that day was "St. Patrick."

You can pick up a free map of the Irish Heritage Trail at the Boston Common Visitor Information Center, or download a copy at IrishHeritageTrail.com.