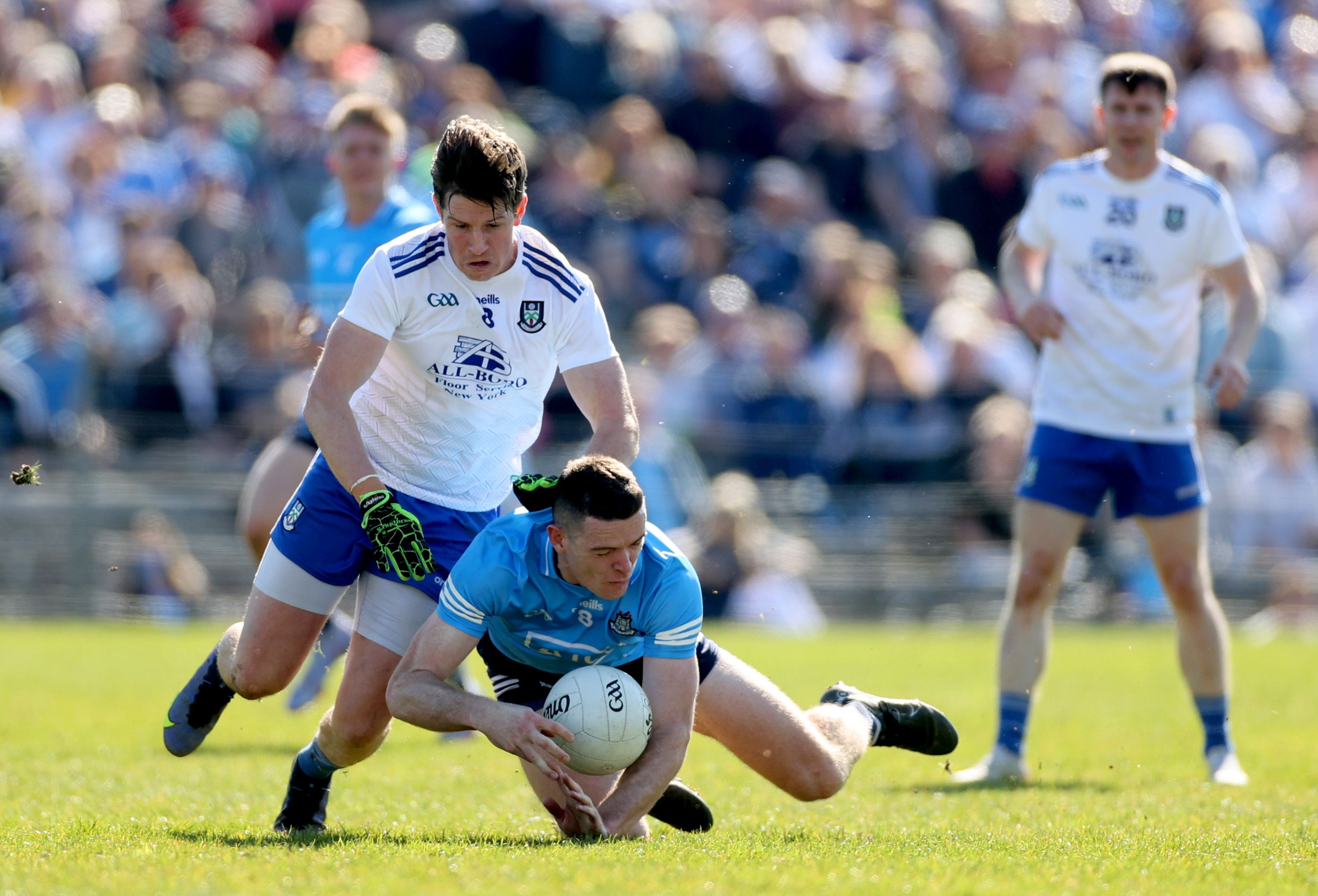 What an absolute cracker of a game that had everyone watching on the edge of their seats until the end at sun-drenched Clones on Sunday afternoon.

Jack McCarron’s last gasp free from 45 metres in the end won it for Banty McEneaney and his merry men after Dublin had fought back magnificently to level with time almost up through a Dean Rock penalty.

The game had championship intensity because of the prize of maintaining top flight status and both sides slugged it out with might and main to the very end. The home side led for large tracts of the game but then looked like being caught at the winning post by a Dublin team finishing like a train.

However, it was Monaghan who stood up in the white heat of endgame battle to clinch a free which Jack effortlessly slotted over as if it was a practice kick in a training session. That brought his total to 2-6 for the day and made him the man of the match and Monaghan saviour on the day.

It wasn’t the first time he had saved his county as it was his scores which kept Monaghan up in their relegation play-off against Galway last year.

Dublin entered the game as favorites following their showings against Tyrone and Donegal in previous weeks. They looked like they had settled down and they started as if they meant to get business over with quickly with Seán Bugler and Cormac Costello cutting through the home defence for early scores.

However Dublin’s failure to drive on from purple patches is something that Manager Dessie Farrell will look back on with alarm as no sooner had they looked comfortable than Monaghan were able to rock them with 1-3 without replay – the goal from Sean Jones a real confidence booster for the hosts.

Leading by 1-7 to 0-8 at the interval, the game was still quite evenly balanced. However it was Banty’s boys who showed the greater desire as great points from from Gary Mohan and Kieran Hughes, was followed by McCarron slotting home a penalty to push them  seven points clear.

This forced Dublin to respond, which they did with minors from Cormac Costello, Bugler and lively substitute Lee Gannon, who scored two really excellent points to reduce the arrears to a solitary goal.

With their captain Ryan Wylie seeing red after being flashed with  two quick yellow cards, it looked as if the game would turn on its head but once again McCarron popped up with the score of the day when he lobbed Michael Shiel to give Monaghan a six-point advantage.

Then it looked bad for the Dubs when James McCarthy also picked up a second booking and had to leave the field.  Rock  kept showing for possession and scoring when chances came his way  and his  penalty on 71 mins had the sides level with one play left in the afternoon.

Who would it favour? The brave home side won possession and a free which resulted in McCarron’s dagger to Dublin hearts with a score that confines them to Division 2 for 2023. Dublin fans will now hope that the imminent return of Con O’Callaghan can fire them back up to the level which brought them six Sams in a row.

There were so many permutations going into the last round of Div. 1 games that only a fool could have confidently predicted the outcome.

All Ireland champions Tyrone knew a victory in Kerry would take them out of the relegation equation and duly travelled back north with two  league points and safety following a one-point victory in Killarney by 1-15 to 2-11.

Donegal had a similar victory margin over arch-rivals Armagh in Letterkenny. In a tempestuous game which acted as a dress rehearsal for their upcoming championship encounter in less than three weeks, Declan Bonner’s side held out for a 1-14 to 1-13 win.

It was easier for Mayo at ‘home’ in Carrick-on-Shannon when they had eight points to spare over Kildare on a 2-20 to 0-18 scoreline which saw Kildare relegated.

In Div. 2 Roscommon had to beat Galway to be sure of promotion and duly did so by 1-20 to 1-15 against a weakened side put out by Padraig Joyce. It should be a totally different game when both sides meet in this weekend’s final in Croke Park. At the other end with Down already gone through the trapdoor, Cork and Offaly met in Tullamore with the winners maintaining their divisional and Sam Maguire status while the loser lost both of those cherished status situations.

Offaly showed great character to come back from a three point disadvantage to lead late in the game but it was then that Cork showed their class with late scores to win the day.

point victory over Wicklow in Aughrim while Limerick recovered from a poor start with one point after two games to beat Fermanagh and clinch a berth in Div. 2 next season.

Cavan and Tipperary finally got their acts together to emerge as the top two in Division 4 with respective victories over Waterford and London.

Relegated – Offaly and Down