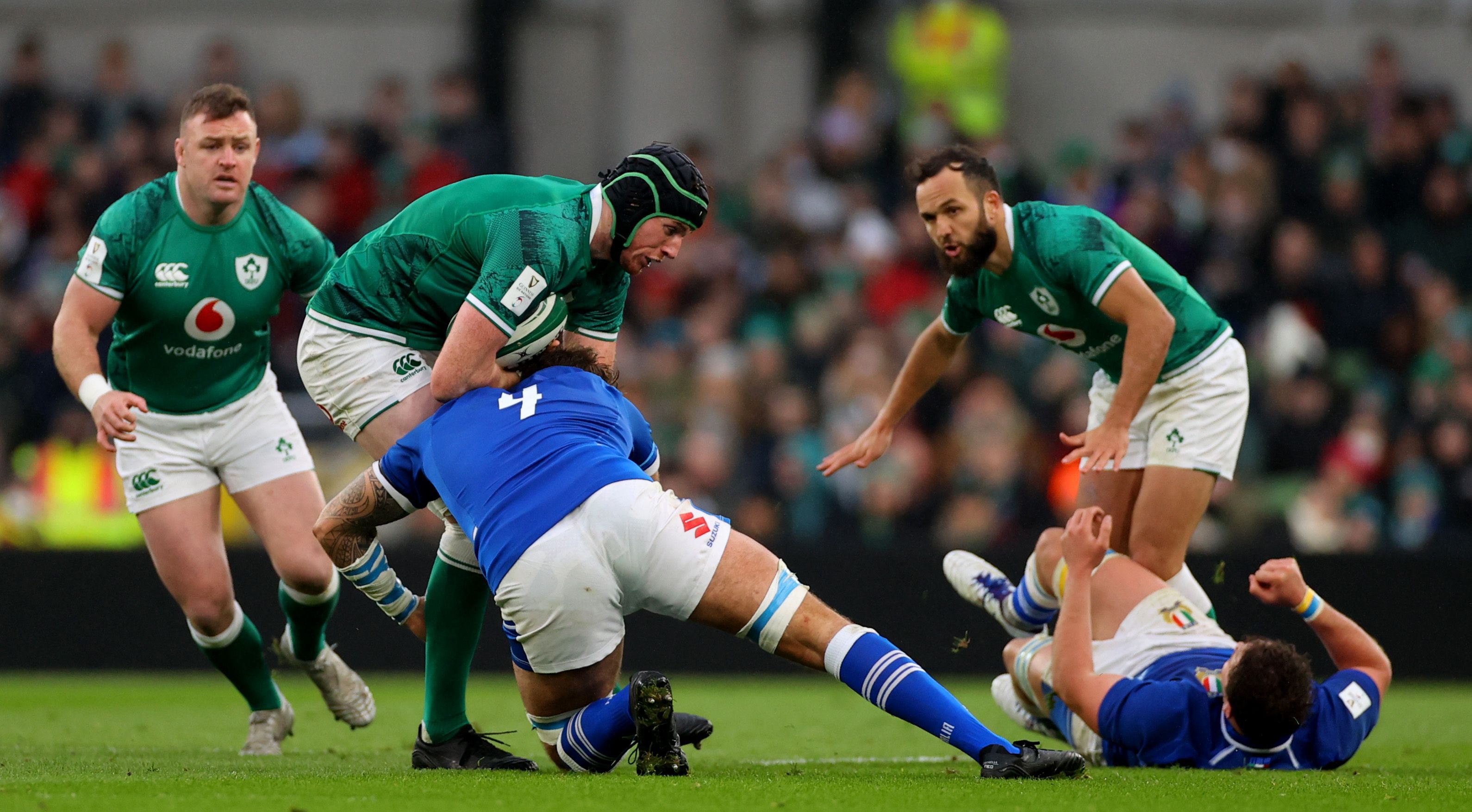 In the end it wasn’t even a good training session as Ireland, with two extra players on the pitch for three-quarters of the game and three for the last six minutes, routed hapless Italy nine tries and six conversions to two penalties at the Aviva Stadium on Sunday.

Georgian referee Nika Amashukeli, making his Six Nations debut, was involved in controversy after sending off the visiting reserve hooker Hame Favia in the 18th minute for a high tackle of his Irish counterpart Dan Sheehan.

As their starting number two Gianmarco Lucchesi had earlier been forced off with a shoulder injury, it left the traveling party with no other trained hooker on their bench, and the game had to switch to “uncontested scrums” for the remainder of the game, i.e., whichever scrum-half fed the ball would automatically receive the ball back.

The referee correctly told the Italians that they would have to remove another player (and an Italy winger left the field) – under a law implemented by the rugby authorities to stop penalized teams adapting to and exploiting the no-contest situation by bringing on, for example, faster back-row players to take their place in scrums against regular front-row players.

Leading 7-3 at that stage, Ireland went on to dominate by running in a further eight tries, but it took time for them to dominate on the scoreboard. Eventually, the Italians were reduced to 12 men when Braam Steyn was sin-binned near the end for batting the ball into touch to stop Ireland scoring a try.

The increasingly influential playmaker at scrum half, Jamison Gibson Park, and skipper for the day, Peter O'Mahony, finally added tries in the first half, while impressive debutant at full-back, Michael Lowry, crossed for two and eschewed his chance of a hat-trick later on by passing out to James Lowe for him to touch down for his second of the day.

Second rower Ryan Baird got his first international touchdown as did replacement Kieran Treadwell while Joey Carbery set the ball rolling with the first try of the day.

The introduction of Johnny Sexton as Carbery’s replacement in the 53rd minute very noticeably strengthened an Irish effort that had been getting sloppy due to the inevitably of victory.

Ireland now are up to second place and next up face England on March 12 in Twickenham before rounding off the tournament with a home game against Scotland.