Home Community Features & Events For Ava and Her Sisters Everywhere 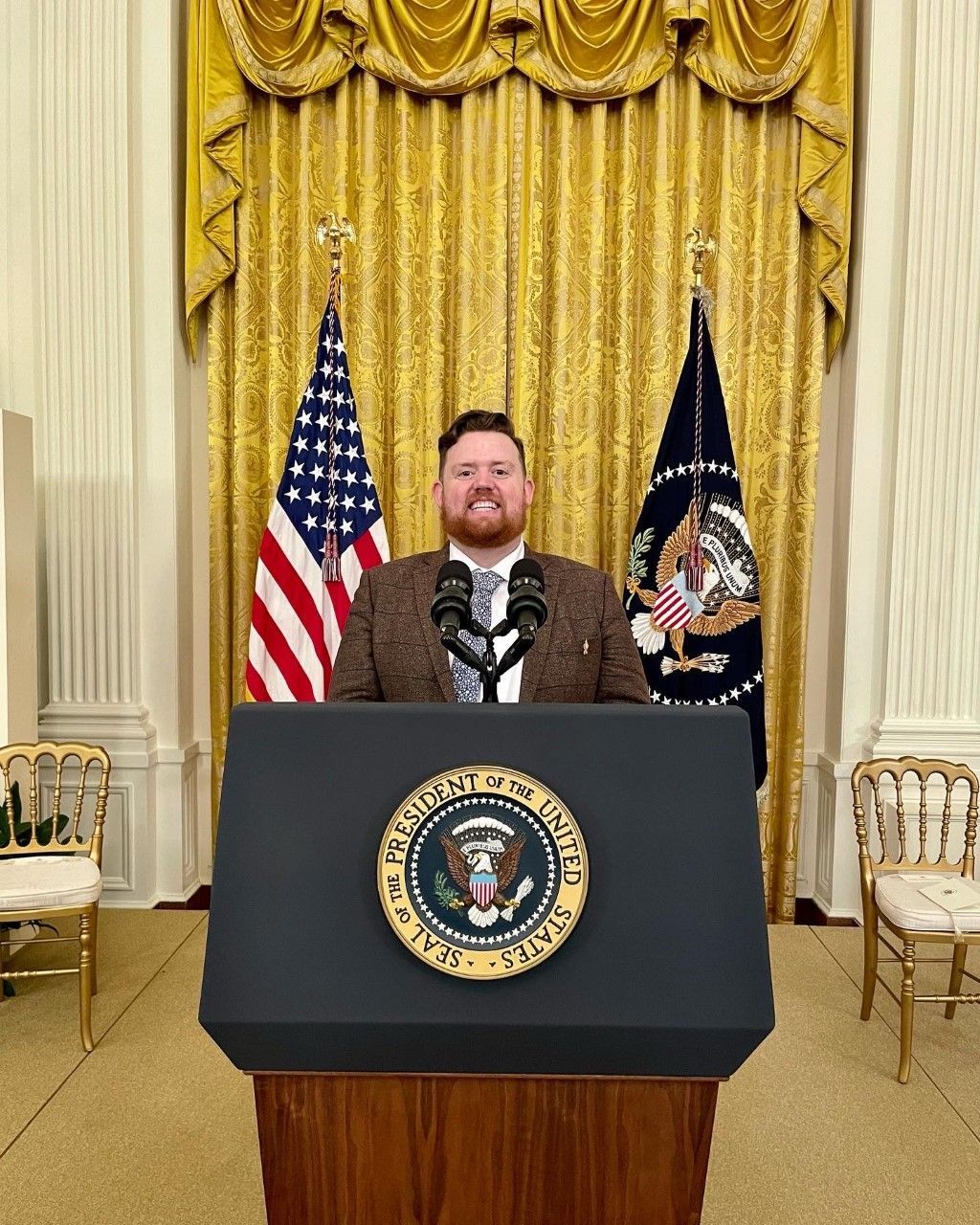 “My Fellow Americans.” Maurice Barron in the East Room of the White House.

For Ava and Her Sisters Everywhere

All you need to say is, "The President asked me to be here today."

This is the advice I get from my seatmate Joseph, who, unlike me, has been to the White House on many occasions. A friend of the president, he seems genuinely amused that he is seated next to someone who can't quite believe that they are sitting in the fabled East Room of the White House and who is failing to articulate why.

After entering through the Northeast Gate and bonding with the Secret Service agents over the relative toughness of rugby vs. American football, I struggled to coherently explain to other guests why I am in attendance for the announcement on the Cancer Moonshot.

I'm asked what organization I'm with, or the hospital I'm affiliated to. I say, "My daughter had a rare form of pediatric cancer." I talk about being a parent of a child with cancer, writing poetry, writing a letter to the president, and finally, maybe because I'm Irish.

By themselves, these answers are not very satisfying. Still, as Joseph explains, my story is precisely why President Biden would want me there today as he announces his bold ambition to reduce the death rate from cancer by at least fifty percent.

To understand that story, you must go back to April of 2020. My then 13-month-old daughter, Ava, who will turn three this month, suddenly became incredibly unwell. So unwell we had no option but to take her to a pediatric emergency room.

Initially thought to be a minor infection, an ultrasound found a massive lump on one of her kidneys. Without delay, Ava was admitted to the pediatric oncology unit. Over the next few days additional scans showed more clearly the rapidly growing cancerous tumor that had thankfully not yet spread to other parts of her body.

After moving her to Memorial Sloan Kettering Cancer Hospital, Ava underwent a nine-hour surgery to have her right kidney wholly removed. Genetic testing showed Ava's tumor as a very aggressive type of cancer. She began an arduous treatment plan which included radiation therapy and eight rounds of chemotherapy.

Over the next nine months, Ava spent countless days in the hospital, often in the pediatric ICU, as she battled against the effects of the drugs designed to destroy the cancerous cells still in her body. Then, finally, on Christmas Eve of 2020, after scans showed she was in remission, she had her last surgery and began the long road to recovery.

As a parent of a child with cancer, it is almost impossible to explain how agonizing the experience is, and how utterly brave Ava and my wife have been.

While I would have been outwardly optimistic about Ava's chances, inwardly, I was gripped with feelings of despair and hopelessness. At my lowest, when it looked like Ava wasn't going to make it, I resolved that "If she goes, I can't stay."

Often alone because of the single parent rule in the hospital, I found myself watching hours of CNN to distract myself from Ava's illness. Unfortunately, the only news coverage was the pandemic, or the presidential election. I knew everything I ever needed to know about Trump, but I found myself learning more about Joe Biden. I saw how he had known both suffering and loss in his own life, but somehow found a way out from that sorrow.

In one of his speeches, Biden talks about failure and loss but that "Giving up is unforgivable" and how even in the worst of times, you must "Steal the moments of joy no matter how small." Those words and his actions helped me resolve that it was possible to go on even if the worst was to happen.

As Ava's condition improved, I knew I had to write to the president and tell him how he had inspired my family. In my letter to him, I said that “your strength gave me strength, and the embrace of your emotions allowed me not to feel as if I was somehow less when mine overtook me.”

I also needed to thank him for "helping a fellow Irishman be brave when they most needed to be."

I sent that letter not expecting a response, and only to express my gratitude. But, improbable as it sounds, that letter reached the Resolute Desk and the president. The letter led to the invitation to the White House to witness the President, First Lady, and Vice-President speak in the humblest of ways about the shared experience cancer brings to all the people it touches. Being present that day was such an incredible and unique experience and something I will remember for the rest of my life.

I believe this is a truly American story. Is there another country in the world where an immigrant, married to the daughter of immigrants, could find themselves in that position simply because I wrote a letter? My only regret was, because of Covid protocols Ava, and my wife Kandice, could not be present also.

In recent days, as my family and I prepared for Ava's quarterly post-treatment scans, an envelope arrived from the White House. The envelope contained a letter written and signed by the president, dated two weeks after the Cancer Moonshot event. The timing of this letter could not have been better as it lifted us on a week where our "scanxiety" levels are at their highest

Given the current global turmoil and the gravity and responsibility his office brings, I'm so grateful we have a president who still finds time to help lift the burden of the people who reach out to him. I drew so much strength from a man who so publicly grieved about the losses in his life, and showed that embracing, not hiding, your pain was the only way to move forward.

As we have learned from the previous resident of 1600 Pennsylvania Avenue, words matter, and the words of a president have the power to inspire or incite. This president's words have inspired my family, but more remarkably, our words seemed to have inspired him too.

In his letter to me, President Biden writes: "We Irish are the only people who are nostalgic for the future."

His words and his embrace of his Irish heritage instill such pride in my Irishness. Being Irish is, and will always be, at the center of my soul. Still, after fifteen years, my life now is here in the U.S. and I became an American citizen last spring. Yet, until President Biden, l had not felt that special American patriotism which is so often proclaimed by the people lucky enough to live here.

The president's letter, with his request to give Kandice and Ava his best, and for me to "Keep the Faith" makes me as proud to be an American as I am being Irish.