Home Community Features & Events For Ashling, and for Women Everywhere 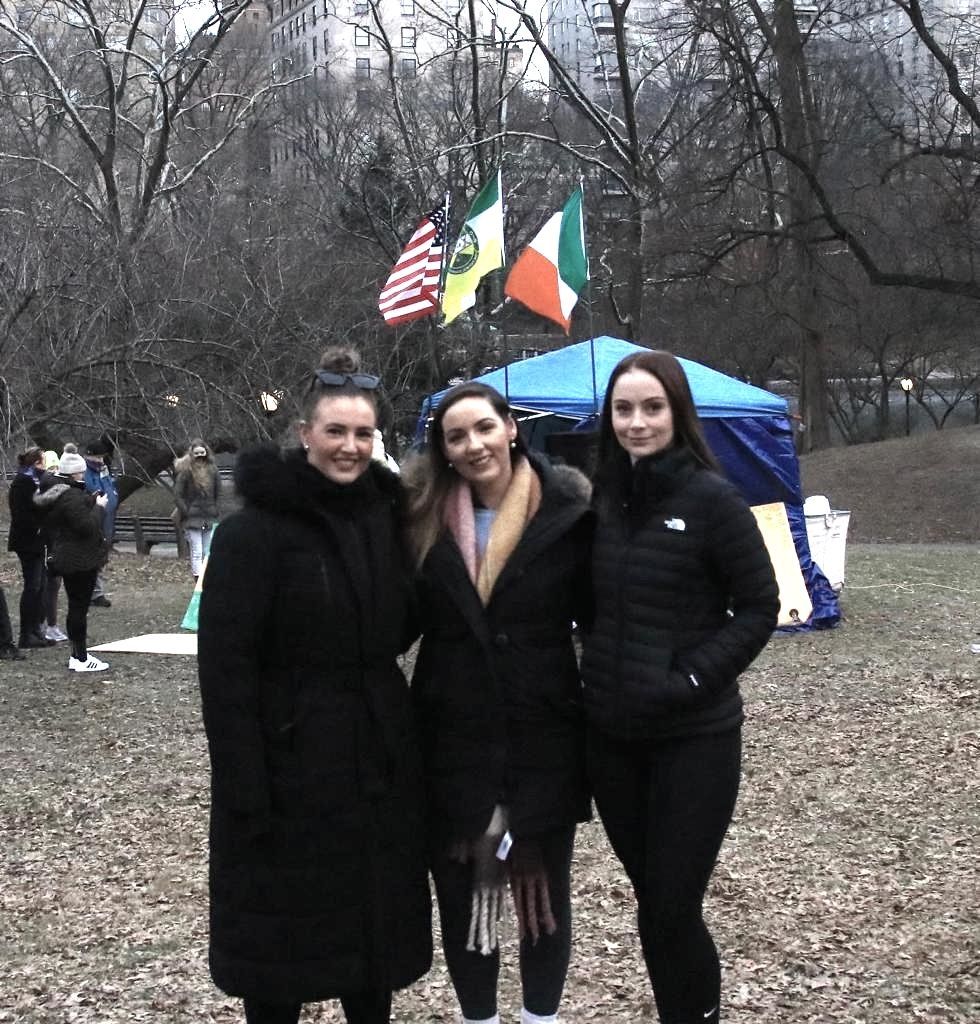 For Ashling, and for Women Everywhere

The dark news ricocheted quickly throughout Ireland and across the global Irish Diaspora.

On January 12 a young woman was brutally attacked and murdered while running alone, her body found by the Grand Canal in County Offaly, along her usual jogging route near Tullamore.

Ashling Murphy was just 23 years old, a teacher, at the very start of her career, and a talented traditional Irish musician.

A beautiful and gifted young life had suddenly been taken in a senseless act of violence.  The Irish people responded, as they always do. Vigils in memory of Aisling sprang up throughout the country. Revulsion, and heartache for her family and loved ones were universally felt.

But something else was universally felt, mostly, if not exclusively, by women. It was the feeling of vulnerability. That violence against them, not men, lurks in every shadow for even the most confident, independent female.

Across the Atlantic, Sarah Cosgrave, raised in County Mayo, read the awful news on her phone. She had complete her 5 a.m. run in Central Park in Manhattan before beginning her day as a pediatric physiotherapist at NYU Langone Hospital in midtown.

Perhaps it is the well-known story of the assault on the Central Park Jogger decades before, or the more recent killing of a girl out for a run in Queens in 2016, or it may simply be the signal the world has given her, as a little girl, from her earliest childhood, but Sarah is forever mindful of her safety, especially when running solo.

Though she knows she can never be one hundred percent safe, she won’t set off without at least some precautions in place.  Says Sarah: “Every girl has unfortunately gone through some situation where they felt unsafe. We definitely take extra considerations in everything we do.  Things, I know from talking to most lads, would never even cross their minds when they leave the house, but it is something that we as girls do without thinking.”

As the news sank in that day, Sarah realized it could have been her, or any one of her girlfriends among the vibrant community of young Irish she knows in New York.

“And unfortunately, it still could be any one of us,” she says. “Feeling so vulnerable, it’s scary.”

It was a feeling that would not leave her.  Within a day she’d decided something, anything, had to be done for Ashling, the people that suffered her loss, and for women.

And she knew just where to start.

Her friend Amy Brett, a fellow Mayo woman, sprang immediately to mind.  They say if you want something done, you give it to a busy person, and Amy is one such busy person with a stellar reputation for getting things done.

Sarah sent a text to Amy that Friday night, barely 48 hours after the tragedy, proposing an event to honor Ashling's short life, and to raise money to support awareness of violence against women.

Amy was immediately on board, and soon her friend Niamh Reilly, from Dundalk, was in the conversation. By chance, Niamh was friends with Ashling's sister, also named Amy, from their time together at college in Dublin, so for her, Ashling's story struck even closer to home.

Both were the right women for the job of helping Sarah. Last December, in the days coming up to Christmas, Niamh and Amy had organized a fundraiser for a worthy Irish charity, “Join Our Boys,” raising over $16,000.

For Ashling's event, “Women’s Aid in Ireland” (WomensAid.ie) was selected as the recipient of the proceeds. And the format for the fundraiser?  With all three active in sports - Sarah the runner, and Amy and Niamh being avid Gaelic footballers, playing for the O’Donovan-Rossa club and the Manhattan Gaels respectively, where, incidentally, no love is lost between these two friends on the field of play - it was decided to make it a run in Central Park.

All three rolled up their sleeves. By Sunday, a poster had been created, and a shared hosted spreadsheet for registering participants had been set up.

All this then went out on social media, mainly Instagram, with the O’Donovan-Rossa and Manhattan Gaels networks alerted first, and from there the Camogie chat groups for the Liberty Gaels and Annie Moore’s, were contacted.  Then the Aisling Center in Yonkers picked it up and gave it a boost.  And viral it went.

“We really only expected 40 or 45 people to show up,” says Niamh. “Then on the Tuesday it just blew up. It was more and more people joining. We got to 100. Then we got to 200 on the Wednesday. 400 on the Thursday. The spreadsheet was just growing and growing.”

On Sunday January 23, at 4 p.m., the approximate hour of Ashling's murder, an estimated 850 people from New York’s Irish community showed up in Central Part to run, or walk. It was a mere nine days after Sarah’s first text to Amy, the one that set everything in motion.  Anyone who has ever organized anything will recognize this as a tremendous feat.  Even with three laptops and several phones handling registrations and accepting payments on the day, it was almost impossible to keep up.

According to the three organizers, the crowd was made up mostly of native Irish people in their 20s and 30s, with young men well-represented, along with a healthy number of those of Irish decent.  But there were also many in their 40s, 50s and above too, and several families with young children.

“That was actually one of the nicest things,” says Sarah. “It was men, it was women, it was my age, it was kids, it was seniors. I was getting phone calls until the morning of.  Some women said they were bringing in their elderly aunt from the middle of New Jersey. They felt they needed to do something and they were just so glad they were able to find a place to show their support for the family of Aisling.”

Help was forthcoming from many strands of the community. Fiona Smyth, long involved in community activities, organized a marquee and a sound system, and there was traditional Irish music by the Rodican Sisters, among others. Irish singing star Dermot Kennedy was there, but, not wishing to distract from Aisling’s day, had to be coaxed to sing.

His poignant rendition of “The Parting Glass” was perfectly appropriate. Afterwards, several establishments among the Irish tavern owners and hospitality community opened their doors to those who had participated, with generous donations of food and beverages.

Avoca NYC on 1st Avenue, the Butcher’s Block in Sunnyside, and Shelley’s Café in Maspeth, are deserving of special mention here.

“But that’s the Irish community for you,” says Amy.

“You ask anything of an Irish person, and they’ll nearly bend over backwards to do it for you.”

In the end, over $32,000 was raised. These funds went to Women’s Aid, and will be used to help bring attention to the growing epidemic of violence against women in modern Irish society.

For anyone who believes the Irish in New York are no longer in such numbers as to form a community, and make an impact, need only look to the events of January 23, and the leadership of three young and capable leaders.

The question inevitably comes up. What next for Sarah, Amy and Niamh?  Sarah says she’d like to make this an annual event, to continue to shine a spotlight, through what happened to Aisling, on an issue that is very important to her. Amy and Niamh agree. They can see themselves doing this again. Says Amy: “It would be great to keep Aisling in everyone’s mind, and not just a once-off. We don’t want her to be forgotten.”

The task of even reducing, let alone eliminating, an ancient scourge in our world, one that women know only too well, is a daunting one. But that is where hope comes along. As Seamus Heaney said, “Hope is not optimism, which expects things to turn out well, but something rooted in the conviction that there is a good worth working for.”

Sarah, Amy and Niamh are doing something good worth working for.  But none of them believe they are doing anything heroic, or that they should be singled out for praise for the spectacular success of that Sunday in the park in January.

“There is a dead woman at the center of this,” says Sarah.

“At the end of the day, this is about Aisling and all the other women that have gone before her, and not about us being wonderful. It was wonderful how everything came together. It was the sum of everyone and what they did.”

Paul Finnegan is the Irish Echo’s Director of Business Development, and the 2022 IBO President.